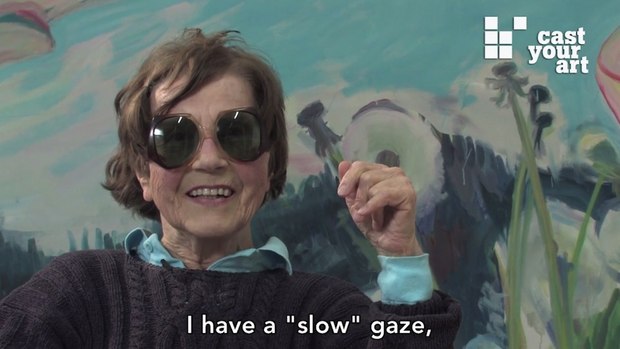 I recently came across a short but thoughtful reflection on art and life by the Austrian artist Maria Lassnig who passed away this past May.

I first saw Lassnig's 1992 animated film "The Ballad of Maria Lassnig" – or “Kantate” as it was originally titled – many years ago.

In this collage-style animated film Lassnig herself sings the soundtrack lullaby whose words make up a 14 verse autobiography. She reflects on joy and grief, disappointed love, and even her struggles with the art world:

I could try Op-Art, Pop-Art or Tachism
but the Art Mafia always called the game.

Though the song describes her own experiences, it is ultimately an ode to art.

The live action element of the film is made up primarily of her onscreen presence. Appearing in a range of costumes she is both narrator and actor relating moments referred to in the song.

The drawn and painted animation, often a backdrop to the live action component, further describes the inequalities and stresses of being a woman in post-war Austria.

While Lassnig was a well informed and engaged artist, the animation itself strikes me as illustrative and I wonder why her experiementation in painting doesn't carry over into the animation.

In the Guardian’s obituary, Christopher Masters describes her as an artist who “represented the naked body with startling honesty.” But I think he rather means “with startling courage” because in her paintings she doesn’t try to create the illusion of something a viewer might perceive.

Instead, as Lassnig herself describes her work, it arises from the struggle to paint from the perspective of her own body’s experience, what she termed "body consciousness" (1) rather than from the outward appearances of things. And the rubbery distortions of limbs and torsos remind me of visceral wrestling in Francis Bacon’s work.

One work particularly stands out for me. The raw, gestural charcoal marks in “Selbstportraet Expressiv” of 1945 give it an immediacy that I don’t find in her more finished paintings. Each mark feels like it’s been put down in a deeply concentrated effort to capture and express her perception of and feelings about the visible form she was examining in the mirror before her.

Following each raw mark, each daub of paint, I find myself a privileged viewer of her process.