‘The Making of a Dream’ Episode 19: Henry Winkler’s Butt

My art is on his butt! 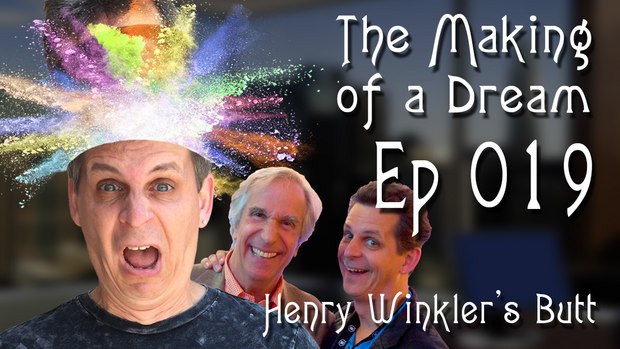 In 1999, I optioned the rights to an unreleased comic book called Dream Factory and have been on a quest ever since to get it produced as a movie or TV series. In this blog, I share with you the history, the near hits and the actual production notes as I finally move into production. #Thisismydream.

I’ve always been a fan of Henry Winkler. I was also lucky enough to work with him on Adam Sandler’s The Waterboy. I was the illustrator on the movie so I drew all the storyboards, designed the team logos and created the tattoo of Roy Orbison on Winkler’s butt. But, I never met him, until one conference where I was pitching Dream Factory.

In this episode, I detail the story of how I met Henry and how I told him that my art was on his butt…in front of over 300 people.

To read other blog entries on The Making of a Dream, go to http://www.awn.com/blogs/making-of-a-dream-animation-production-blog

Mark Simon is a story artist and director with over 4,000 production credits, including 44 features.

You can find his storyboard samples online at www.Storyboards-East.com.  He can be reached at MarkSimonBooks@yahoo.com (link sends e-mail).

A Digital Women Discusses Society’s Perception of Femininity in ‘I.D.A’ CG Short
Creating a Brighter World for Color Designers
Olaf Gets His Bambi Moment in ‘Once Upon a Snowman’
Glen Keane Talks Believing the Impossible in ‘Over the Moon’
Focus on My ‘Vote:’ Six Point Harness Delivers Election-Themed Animated Music Video for ABC’s ‘Black-ish’
Genndy Tartakovsky Talks ‘Primal’ and Telling Stories Without Words
Matthew A. Cherry: 'Animation Can Do Anything Live-Action Can Do'
A Brave Young Girl Fights to Save the Planet in ‘Astronaut Spaceman’
END_OF_DOCUMENT_TOKEN_TO_BE_REPLACED