Lobster Films has launched a Kickstarter campaign to fund the Keaton Project - which is a venture to restore 32 Buster Keaton films.

As you all know I don't like to send out kickstarter appeals for money, but my friend Serge Bromberg and his film restoration company Lobster Films is in the process of restoring 32 Buster Keaton films and they need some help.

If you have a few dollars or euros to spare this is a worthy project, and if you don't please read about the work that Serge and Lobster Films are doing because it is of interest to all film buffs.  Please check out the website: 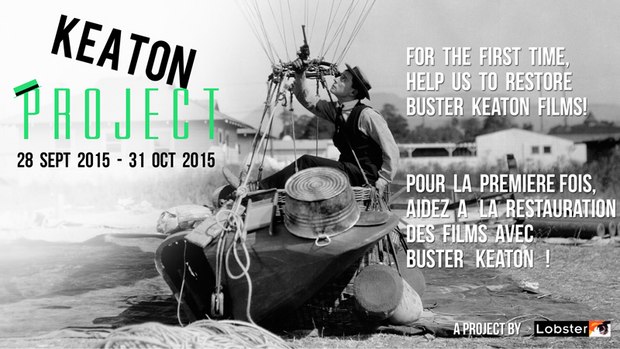 Here is a message from Serge:

For over 30 years, Lobster Films has been finding and restoring films. After a big cycle (2009-2014) of acclaimed restorations for Charlie Chaplin's short films, it is Buster Keaton’s turn to go through our labs.

Lobster Films launched a Kickstarter campaign on Monday 28 September to fund the Keaton Project, which will allow us to carry out the restoration of 32 Buster Keaton films. A number of technical, financial and human means have already been implemented to prepare and digitize all the elements.

We have now reached the digital restoration stage. It is the most delicate, fastidious and time consuming step. A small group of a dozen people are working hard to give Buster Keaton back his youth!

A TITANIC WORK
Restoring the entire Buster Keaton short-movie collection is a real challenge: 32 films, 21 original scores, over 650 minutes and close to 1 million frames!
When we started the project, we knew how ambitious the task was. It took us years to find and gather all the best elements for each movie.

Over 3000 cumulative work hours are necessary to complete the digital restoration stage.

For the first time we wish to welcome your participation in this adventure. This is why we launched our crowd-funding campaign on the international online platform Kickstarter.
The minimum target is 45,000 € - the race against time has begun!

There are already over 130 participants and the project is about 24% funded.
Only 18 days left! Join the adventure! Once the restoration is done, the artist takes over. Buster Keaton, comedy genius, will therefore find his way back to audiences through the Christmas DVD release (a collaboration of Arte-Lobster Films), as well as film screenings (in France and abroad) by the end of the year.