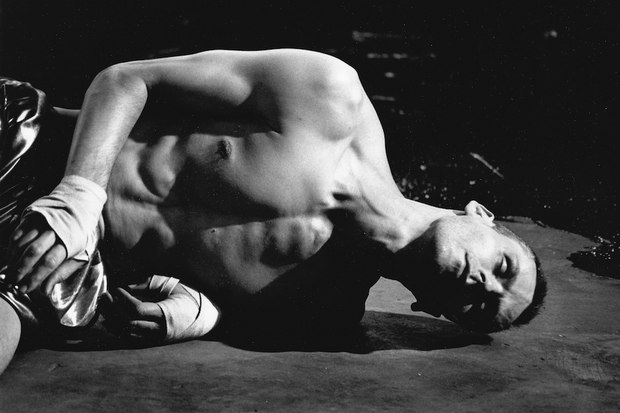 This isn’t a rhetorical question - as a writer on animation I really do wonder about these points of crossover and how we speak about moving imagery today when so much of art, animation and film are in fact mixed practices.

This past week I spent some time viewing a powerful video installation by Laura Taler, The soft and the pliable will defeat the hard and the strong, currently showing at Gallery 101 in Ottawa, Canada.

Laura’s background and training in dance and choreography are evident in the work, and the poetic, slow moving nature of Carry Tiger to the Mountain and The Boxer brought that to the fore.

Looking through the lens of subject, one work presents a woman moving meditatively at the sea edge. The other depicts a boxer’s struggle and fight. Both present dancers in very decelerated motion, though in neither case has the video been put through a slowmotion process. Both evoke the choreography of exquisitely contained dance. While for Laura the two works are distinct and and related to the specificity of each choreography, in juxtaposition they evoke for me a sense of longing, and ideas about immigration and strife. It’s impossible to watch a woman standing at the sea edge today – gesturing inwardly and reaching outwardly – and not think of those who struggle for their lives, risking everything to reach safe shores.

These are powerful works, and in addition to moving me deeply they also brought up questions related to how we discuss work like this.

So when does movement depicted so slowly that we are aware of each incremental move approach animation? And what does that mean for those of us who think and write about work like this?

Paul Wells offers a “working definition” of animation in his classic text on the subject Understanding Animation. “… a film made by hand, frame-by-frame, providing an illusion of movement which has not been directly recorded in the conventional sense.”

Taking into consideration the newer technologies, he expands on this with a quote from Norman McLaren, “‘Animation is not the art of drawings that move, but rather the art of movements that are drawn. What happens between each frame is more important than what happens on each frame.’”

Early in my animation studies I encountered this well known quote and read it as referring to the viewer's experience of making meaning during the between-frame-moments as moving images rushed by at 24 frames per second. Recently I spoke with Don McWilliams, also an NFB filmmaker and friend of Norman McLaren's, and he explained that McLaren was actually referring to the time the animator takes to think about their next frame before setting it up and shooting it.

My take away is that animation is the art of thoughtfully assembling moving imagery frame-by-frame. And if the artist is editing at the frame-by-frame level, then what exactly are they looking for that’s different from what Laura is looking for.

Does frame-by-frame editing play a role in the making of Laura's works? Or are these thoughtful films more about the gestures reading as a continuous whole? And finally, what distinguishes this kind of filmmaking from pixilation?

I asked Laura what she thought.…

Laura Taler: Interesting beginning! I thought oh God now you made me think. Now I have to go have a snack and energize...

Sharon Katz: Haha! So now that you’re fortified, what do you think? What was foremost on your mind in the dancing and shooting of the video. And what was most important when you were editing the work? Or were there no edits?

sk: So what were you looking for in making those edits?

lt: Both choreographies are choreographies of slow movement. The performance that Bill created of a boxer in the early 90s was extremely slow and beautiful. I had to work with Bill to make changes because it had all kinds of really great theatrical conventions that didn’t work cinematically. But my overall goal in making dance films is to reveal what it feels like to do that dance. sk: In a sense that’s how animators work, feeling out the motion that they’re trying to transcribe to a mark or line.

lt: Yes. In fact I was looking at your idea of animation as the art of movements that are drawn and thinking that drawing is a very broad concept. I remember seeing this exhibition at MOMA in New York on drawing and it included dance films which I found really interesting... This idea that movement and dance is a way of drawing in space with your body.

sk: Absolutely, in fact I’m thinking of Merce Cunningham’s work Walk Around Time and Cornelia Butler’s comments on it in the MOMA catalogue for that exhibition which I have here: “In the performance, dancers mingled with large rectangular inflatables... The literal marking of time through movement, through walking around to get to the other side of waiting...”

sk: What is that moment of stillness for you? Is it an expectant pause?

lt: : I think it’s reflected in practices like mediation ... I am questioning what is means to move forward... what is means to be stagnant.. and it’s funny but when I am very still I feel movement more.

sk: You mean that you feel acutely those incremental tiny movements holding that stillness?

lt: It’s not a holding, it’s like a settling into the movement that’s around us and inside of us all the time.

sk: An organic being alive kind of thing?

lt: Exactly. You can talk about it all kinds of ways ... through mediation, yoga, awareness, zen but when I’m still I can feel so much movement going on inside my body, and movement happening outside my body, very minute movements.  But when I’m moving around I don’t sense any of those things. Because I’m too busy moving from A to B and thinking about the next thing.

lt: Moving slowly requires a different kind of physical control than standing still and it produces a different quality of imagery than normal speed.

sk: I’m thinking of Norman McLaren’s film Neighbours. Are you animating your own body do you think? Sort of being the animator and animated object at the same time?

lt: I do agree with you that I am paying attention to how things are moving in incremental ways but it’s very much about creating some kind of a flow. The movement is about embodying that flow. I’m watching Neighbours right now as we speak and I think it’s a very different quality.

sk: Can you describe that different quality?

lt: Staccato… creating the “idea” of movement by using still images.  In the same way that McLaren is using the flat images of houses in the background to create the “idea” of house/home/neighbours.  But it’s not an actual house, it’s an indication of a house by using its constituent elements — roof, doors, windows. It’s not an actual house, it’s not actual movement, it’s not a real fight, it’s McLaren trying to get across an idea by using indicators.  But the indicators can be quite powerful.  Funny at times, harrowing at others.  Like when each of the men pulls the other’s house away to reveal a woman and a baby inside and then proceeds to pummel and kick the other’s family.  We know this is not really happening, we know they are not actually moving, it’s just a series of stills, but it’s still really affecting.

The final aesthetic quality of Laura's films are certainly unique to their medium, form and process, but my take-away is that there is an overlap in thinking behind these slow-moving, highly controlled choreographies and that of many animation productions.

And it’s possible the key may be in the pauses.

More on that in an up-coming interview with painter Martin Golland titled Hold that Pause, due out in early May.

‘My Dad the Bounty Hunter’: Representation Beneath the Skin
The Massive Creative Fellowship Behind ‘The Lord of the Rings: The Rings of Power’
‘The Dragon Prince’ Director Villads Spangsberg Talks Toonlines and Tough Challenges
Laurence Fishburne and Steve Loter Talk ‘Marvel’s Moon Girl and Devil Dinosaur’
Taking an Old-School VFX Approach in ‘All Quiet on the Western Front’
‘Natural Habitat Shorts’: Like ‘Ranger Rick,’ But for Adults
Framestore Sets Sail on ‘1899’ with New Virtual Production Tools
VFX is the ‘Thing’ for Tom Turnbull on Tim Burton’s ‘Wednesday’
END_OF_DOCUMENT_TOKEN_TO_BE_REPLACED