ANIMARKT 2018 8-13 October, 2018– LAIKA recruiting animators and costume makers on 12 October during the festival. 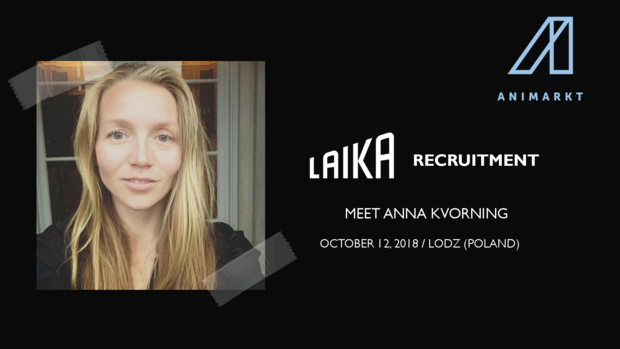 The one and only meeting in Central and Eastern Europe, during which Anna Kvorning from LAIKA will recruit animators and costume makers to work in the studio in USA will be held this year at ANIMARKT Stop Motion Forum.

Recruitment to LAIKA studio will take place on October 12th in Lodz (Poland) in the revitalised buildings of EC1 complex, during the third edition of ANIMARKT Stop Motion Forum. All candidates interested in meeting Anna Kvorning should fill in and send an application form presenting themselves and the effects of their work as an animator or costume maker (link to the application form: bit.ly/2woUywV). Anna will choose the people she would like to meet at ANIMARKT.

Anna Kvorning oversees talent acquisitions at LAIKA and has been with the studio for 5 years during the productions of Boxtrolls, Kubo and the Two Strings and Missing Link. She came to Portland from Los Angeles where she lived for 6 years while working in film sales and at a talent agency.

Why working at LAIKA is so desirable?

LAIKA is a worldwide-known animation studio, which holds a reverence for tradition and mixes it with fervor for innovation. Its history began in 2005, in a warehouse in Portland, OR, where LAIKA began crafting films in the beautiful cinematic style known as stop-motion animation. LAIKA CEO Travis Knight had honed his stop-motion skills and developed a deep passion for the art form while working as an animator on projects like Eddie Murphy’s The PJ’s at Portland-based Vinton Studios in years prior, and he decided to devote his efforts to building a studio that would carry on the tradition and modernize it for a whole new generation of moviegoers.

Since then, LAIKA has assembled an unrivaled team of world-class artists and made 4 award-winning films: Coraline (2009), ParaNorman (2012), The Boxtrolls (2014) and Kubo and the Two Strings (2016) were nominated for an Academy Award for Best Animated Feature; Kubo and the Two Strings also won the BAFTA for Best Animated Film and received an Oscar nomination for Best Visual Effects.

LAIKA recruitment is a part of ANIMARKT Stop Motion Forum – the first in Central and Eastern Europe event of a kind, focusing on stop motion animation (especially in a puppet technique). Its programme also includes such sections as ANIMARKT MASTERS – workshops and masterclasses led by high-class professionals, ANIMARKT TALKS – case study presentations of the most recent stop motion projects, and ANIMARKT PITCHING for the projects of stop motion shorts in development. ANIMARKT Stop Motion Forum will take place in Lodz (Poland) from 8 to 13 October, 2018.

The organizer of ANIMARKT is MOMAKIN (www.momakin.pl) – a multi-tasking unit working for popularizing and propagating animation and supporting creators in Poland
and in international arenas. The Main Partners of the event are: EC1 Łódź – City of Culture and Lodz Film Commission. The partners of ANIMARKT also include: Audiovisual Technology Center (CeTA) from Wroclaw which is also the founder of the awards for pitching winners, ASAF (Czech Republic), Mozinet (Hungary), Fest Anča International Animation Festival (Slovakia), SPPA – Polish Animation Producers Association, SFP – Polish Filmmakers Association. ANIMARKT is partially funded by the International Visegrad Fund, Polish Ministry of Culture and National Heritage, and co-financed by the Polish Film Institute.