KROK festival 2018 is now accepting films for the selection. The deadline for submitting films is June 10th, 2018. 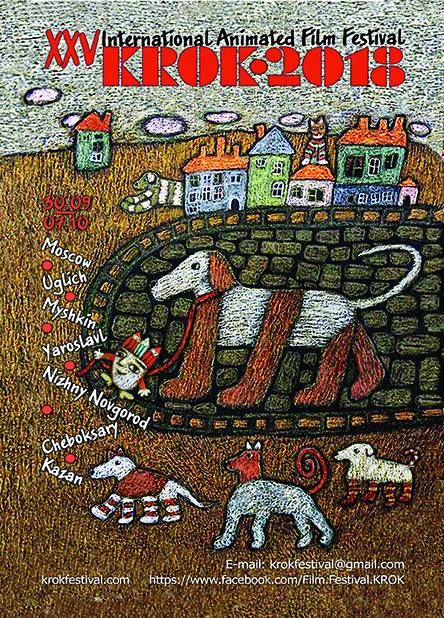 We are happy to announce that in 2018 the KROK International Animated Film Festival will have its 25th edition :) Our KROK ship will embark on our anniversary animation journey on the 30th of September, and we will enjoy warm autumn days until the 7th of October! (We will have to leave the steamboat by 8 AM on October 8th). Our itinerary for KROK-2018 is: Moscow – Uglich – Myshkin – Yaroslavl – Nizhny Novgorod – Cheboksary – Kazan). Wonderful cities, in some of them (the southernmost ones) we haven’t visited in a long time. We’re catching up on it! :)

We are now accepting films for the selection. The deadline for submitting films is June 10th, 2018.

We will be happy to receive your films or recommendations if you know talented filmmakers or have seen films that deserve to take part in our competition. We accept films that have been created in the time period from June 2016 to June 2018.

We’d like to draw your attention to this year’s new Regulations. For the last 20 years we have been altering student and professional films :) This year, as it’s our anniversary year, we have decided to have an experiment and combine them!

2) Debut – first professional film made outside of educational institutions;

As you see, we don’t distinguish applied animation and films for children as separate categories, but we gladly accept them for selection. I am sure that in the heart of every one of you KROK has left its mark  - in your creative or personal life. You definitely have something to say, write, draw, film and edit to confess your love for KROK on its 25th anniversary! We accept pleasant gifts in any appearance/ look/ performance!

Here are the rules and entry form attachments: