Killer Storytellers, Rose-Colored Glasses, and The End of VR (Again) 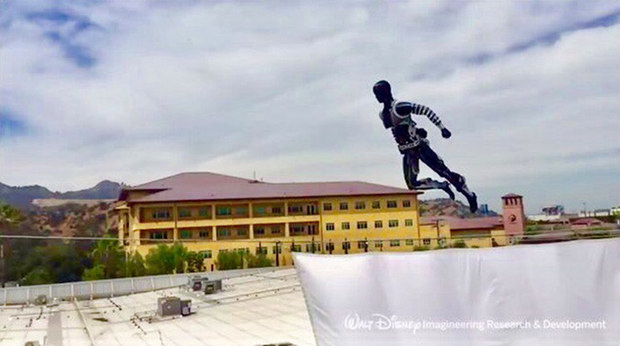 With the recent birth of our second daughter, all semblance of work / life balance and coherent thought has been blown to hell. Acquiescing to this reality - and in the absence of a focused blog post - I instead submit for your consideration three nuggets, which caught my bleary eye during the past month...

As Disney's press release breathlessly notes: "In their mission to create a realistic robotic figure capable of performing complex, acrobatic stunts, Imagineers designed a 90-pound Stuntronics figure to use sophisticated onboard sensors to make its own real-time decisions—all while flying 60 feet in the air. It knows when to tuck its knees to perform a somersault, when to pull its arms to twist, and even when to slow down its spin to make sure it sticks that perfect landing."

Right through your heart.

As in HBO's Westworld, if you think the endgame of the technology is immersive storytelling, you're in for a rude surprise. But don't blame Disney's Imagineers - they're simply splitting the atom, not building the bomb. At VR World 2018 in London, "industry leaders" in immersive technology offered yet another round of rosy prognostications about our VR future, including the usual pablum such as "the end of offices," "the end of suffering and isolation," and "a smarter planet." The capper is "world peace," brought to you by VR via increased transparency (huh?) and shared perspectives (hmm...).

Contrarian that I am, three things come to mind...

While it is indeed true that "appropriately leveraged, there is no reason why technology can’t solve global disputes and improve global relations resulting in a lasting world peace," the tide of human history unfortunately points to the opposite. VR will augment the best and the worst in us, just like every other technology.

The end result: "YOU, only better (and worse)."

THE END OF VR (AGAIN)

But maybe this is all a moot point, given that VR appears to be doomed (again), according to the declining sales rank trends for VR headsets from Sony, Samsung, Oculus, and HTC across multiple product categories.

The HTC Vive is woefully notable. Its 2016 release was taken as a sign that high-end VR for personal computers had arrived. The $800 VR system sparked the entertainment world, but development for the platform has slowed along with sales. HTC recently announced significant layoffs, while continuing to plug vanity metrics.

In my (admittedly biased) opinion, there are three things that need to happen if VR's "Third Wave" (following the medium's inception in the 1960's, and first attempt at mass market traction in the 1990's) isn't to be just another historical iteration...

I've said it before and I'll say it again: the day my 78-year-old mother dons a VR headset in order to do or experience something meaningful to her is the day that VR will have truly arrived.

How ‘Luck’ Applies a ‘Less is More’ Approach to Comedy
Z is for Zagreb: The Animafest Zagreb Exhbition 1972-2022
Dude! - ‘Rise of the Teenage Mutant Ninja Turtles: The Movie’ Arrives
‘Super Giant Robot Brothers’: A Milestone in Virtual Animation Production
‘Luck’ Aims to Bring Hope to Kids In and Out of Foster Care
Pre, Tech, and Post: The Many ‘Vizings’ of ‘Chip ‘n Dale: Rescue Rangers’
Hammering Out the VFX in ‘Thor: Love and Thunder’
END_OF_DOCUMENT_TOKEN_TO_BE_REPLACED