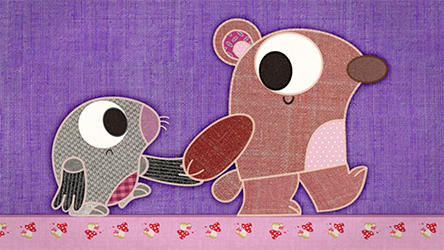 Dear friends of the Patchwork Pals,

This time, it's not only the Patchwork Pals who need your help -  their creators do, too! Would you like to contribute to our Kickstarter campaign?

So many people have asked us for more Patchwork Pals films that we decided to go for a second season: 26 new episodes, 26 new animals, produced in German and English, with our voice talents of season one, Kaya and Olive. We are in the process of writing the stories and designing the characters.

All of the preparation is already financed, but our animation budget of €90,000 is not complete - we still need €25,000 to be able to start. The animation budget will allow us to let a team of three to four animators work for 13 months on the 104 minutes of the series.

The following link will bring you to our Kickstarter site. Here you can read more about our plan, see the list of rewards for the funders - and contribute if you like what you see.
www.kickstarter.com/projects/1052202508/26-new-patchwork-pals

To reach our Kickstarter goal, the time is running from the 12th of September to the 12th of October. A good start is especially important for a successful crowdfunding campaign. So, if you want to support us – please do it as soon as possible!

Taking an Old-School VFX Approach in ‘All Quiet on the Western Front’
‘Natural Habitat Shorts’: Like ‘Ranger Rick,’ But for Adults
Framestore Sets Sail on ‘1899’ with New Virtual Production Tools
Animated Characters: The Art of Babbitt – Part 1
Bruce Smith and Ralph Farquhar Talk ‘The Proud Family: Louder and Prouder’ Season 2
VFX is the ‘Thing’ for Tom Turnbull on Tim Burton’s ‘Wednesday’
We Need to Chat
F is for Flake: The (Not So) Great Animation Robbery?
END_OF_DOCUMENT_TOKEN_TO_BE_REPLACED