Imagination Workshops and the World at Large: Part 5

Continuing reflections on how society has a critical need for igniting and cultivating imagination as the origin of all ideation, inspiration, invention and innovation.

Time for a brief encounter with the Middle East. I have always been fascinated by this region. It is always precarious and seemingly on the verge of ignition. It also signifies intoxicating symbols correlated to origins and heritage entwined with religions, cultures, ideologies and scholarships. It was a few years since my earlier visit and I looked eagerly forward to it. As a person striving to shape my own mind, define my own viewpoints, from the outset I was determined to seek exposure to contrasting and opposite perspectives on the clashing cultures, politics and opinions which the Middle East is abundant in. I was invited there by a school devoted to a variety of arts and design.

Students joining my short workshops came from the same ethnic and cultural milieu. They all studied animation. It seemed like this was a “match made in Heaven.” It quickly became obvious that while we shared an avid love for this most magical of time-based media, our ideas about what that means, how this magic works and why it is so mighty, differ like day from the night.

This particular animation program believes that the art of animation arises from artist’s skill in infusing realistic life into any object or character. Their attitude dictates that all characters and objects must conform to and obey rules and laws of gravity and reality. The artistry is in expertly replicating dynamics making elements act as though they have anticipated weight and mass.

This traditional approach to the art of animation is almost religiously obeyed or conformed to by most animation schools, except for those exploring experimental forms thereof. Disney artists mastered this ability to an unadulterated perfection. Their characters seem totally real and alive.

I represent the opposite perception. I deem that since we are already surrounded by reality, are in fact trapped within it, the magic of animation arises from the artists talent to imagine, envision and finally bring to animated life the fantastical “un-realities.” To me it infers power of the Creator inventing original world, new life forms, unique realities which are as far from what already is as our imagination is capable of unveiling to us. Craftsmanship is great but imagination is supreme.

As a person thriving on intellectual discourse, I was excited about potential outcomes of such a clash of ideologies. Yet I soon realized that these students were unable to open themselves to my angle. We all spoke English, fluently, yet it was beyond them to break away from the notion which was so deeply drilled into them by their program’s doctrine. To them “gravity free and reality independent” thinking was foreign, as incomprehensible a language as if I materialized to them from another planet or alternate dimension. They were not open to it at all, and that in itself I found fascinating.

Given their intelligence, exposure to the outwardly world, challenging milieu within which they grew up in, I had difficulty comprehending their determination to comply with the singular view infused into their minds. Maybe they were too dutiful as students. I as a student was eternally questioning, even rebelling against rules. I believe that questioning or challenging the status quo, rules and what we are taught, is the most probing, direct and effective method of learning one’s own individual relationship to the topic. I believe that being a student is about risk taking and exploring all that is unknown and unexplored. And a school’s obligation is to act as the “Creative Asylum” within which any such risk taking is supported and occurs in a protective environment.

Now two years later, it still troubles me and makes me wonder. Was it my own shortcomings in parting the waves of their brains to lead them forth to my interpretation of creative freedoms? Or what it an upshot of their culture impacted by political stress and unstable settings that made them ridged? Is it such instability that causes them to hold on tight with such a determination to the reality of the moment, since there it constantly fluctuates? A thought-provoking dilemma.

Growing up in an island country, detached from others by waters, or in a big nation that sweeps over a vast continent that is encircled by oceans, young people, chiefly those growing up in economic, political or social security and stability, can become less aware of and less open to other realities over the waters. Their focus may instead turn to benefiting from their wellbeing, focusing on consumerism, materialism, pragmatism and other such isms. After all, superficial systems are designed to draw people in, to over time, grow their addictions by focusing their vision on sparkly vanities, narrowing and grounding their interests and insights into what life is truly about. For if young people ever mull over a topic, the realities they taste in their immediate surroundings can be as contrasting elsewhere as is night from day or heaven from hell.

If fortunate enough to be schooled in one of the comprehensive academic environments, they become exposed to mind-enriching literature daring their thinking and ideas. Yet philosophies which they have to read mandatorily, fact of which they complain as an overload, or abstract and distant theories which they discuss in class, ideals and concepts that sound, but frequently seem somewhat vaporous and not always most applied or pertinent to them, fill their minds with challenges vital to their intellect. If that is so, what is missing in such a perfection?

Based on my experience the insistent bidding for self-exploration, reflection and self-questioning ignites fiery desire for experimentation, risk taking, thrashing one’s head against walls of reality, status quo and all that is known. Such investigation of the unknown is able to amalgamate into passion for self-discovery, which in turn leads to expression, ideation, invention and innovation. Yet this cannot come just from reading published thinking of others. It has to be ignited within.

During one of my most recent as well as rather intriguing series of workshops, at a prominent Californian university, my audience was composed of art students. They were all as diverse ethnically as could be. They reminded me of a program I launched, years ago, at Pratt in NY. My initial students originated literally from around the world. I discovered that such a mingling enabled them to not just learn from me but also from each other, from the dissimilar viewpoints and ideologies resulting from their diverse cultural, political, ideological and social upbringings.

These recent art students, I mentioned above, were welcoming my dares with minds wide open. What else can a mentor ask for? My ideas for the class were amplified from the earlier ones. There were two goals, one, as always, the “gravity free and reality independent” power placing one as the Creator and the ultimate God of the creation which they are about to envision and realize. The other, since they all studied still art, was to have them investigate “metamorphic storytelling” as a still somewhat unusual yet fascinating and exciting challenge.

As we began to learn about each other, I saw that the Caucasian natives had difficulty grasping English spoken by the Asian and Middle Eastern students. Maybe due to that they seemed distant from them and their artwork. Yet, this may have been due to lack of openness to distant cultures or grasp of how rich ancient heritage can be? Fearing unknown is human. Yet within workshops devoted to exposing oneself this can be crippling. Those coming from the faraway lands found themselves straining in attempts at breaking away from their deeply instilled cultural symbolism and traditional clichés. After all, all cultures, old and new, drown in such comfortable platitudes. 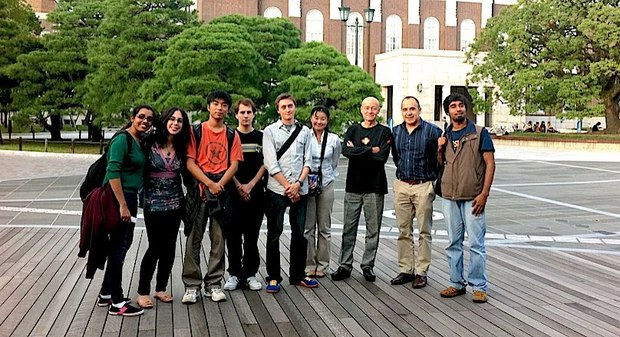 Yet when challenged to envision now possibilities, and when asked to act as the Creator of new realities, unrestrained by the ones we are part of, resolving to clichés or cultural symbolism proves restrictive, narrowing novel horizons that open up in unexplored, pure white or, alternately, the mysteriously impenetrable black spaces. Doing so demands “stepping over to the wild side.”

I observes with deep interest and tried to tackle few other issues. Some students found it hard to break away from imagery derived from what they knew, others resorted to abstracts. Both pose barriers to my mission. Most realism is not inventive. And, when endowed to create new visions, why recap the known? The abstracts can be critiqued for composition, balance, colors, tensions and such but not for the gist of themes they were to tackle. In abstract there is truly no right or wrong to point to and critique. And soon their abstracts became similar to each other.

Moreover, as my assignments became more challenging, it was interesting to see how even the Asian students turned from their familiar cultural symbolism towards abstracts. By doing so they actually broke away from their zone of comfort. While this was not what I was after, it is a form of success. For before one can dive into truly unknown and intangible spaces or ideas, one may wish to resort to initial “baby steps.” Yet since beginnings are always the harshest, as long as one is willing to take that first step, I consider my mission as a mentor to be a success.

As we openly debated above expressed concerns, all of them realized that both the realism and the abstract, for different reasons, extended them safety nets. They ultimately understood that as long as they play safely the magic portal to the “gravity free and reality independent” space will not part for them. Left with such newly acquired insight into themselves, I know that we learned a precious lesson from one another. Ultimately, I found the confrontation truly fascinating.

In conclusion, while complaining about the overload they are under, due to reading or assignments from other classes, the only meaningful regret they and I shared was the short time allocated to us for what we only began to explore. They were clearly eager for more occasions to practice and refine their initial exploration of the “gravity free and reality independent” space, and its rewards. But, even if they were left hungry, at the conclusion one participant reflected the sentiment of others by stating, (and I paraphrase) “While the assignments were demanding, I will never forget the ideas, concepts and perspectives you have opened us to. I will keep them in mind when starting on all my projects.” What more could I ask for?