Imagination Workshops and the World at Large: Part 4

Ongoing reflections on how society has a critical need for igniting and cultivating imagination as the origin of all ideation, inspiration, invention and innovation. 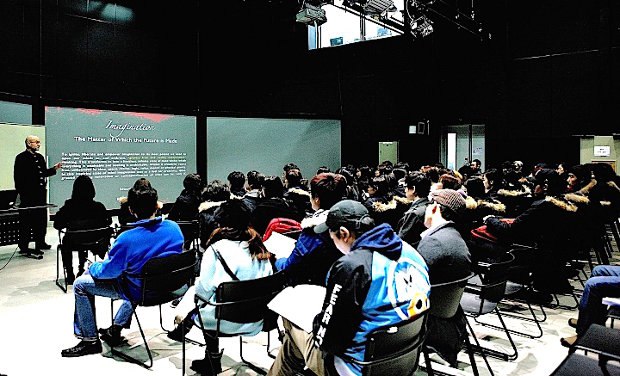 Many people emigrate to other lands to find security or stability they lacked in their motherlands. Some, like myself, had given up all, just to find a fresh life elsewhere. Others chose to do so for a chance to build a new career for themselves or their family. Some did so because back home their lives were hopeless and their situation helpless. That was not my case. I was a spoiled brat in the place I grew up in. They referred to us as the “banana generation.” It was because back then, bananas were hard to come by and therefore expensive, afforded only by some. We never knew what physical labor was about. It was seen as beneath those who either called themselves, or were referred to, as “intelligentsia.” We never dirtied our hands with it. We were too intellectual, too rotten, too above the masses, too spoiled, not as bananas but as humans. It was not until I arrived in the USA that I found myself forced to discover and actively practice real labor. In need of the most basic revenue I even found myself working in a sweat shop pressing trousers for ¢25 per pair, or painting, not art, walls, or punching holes in pages, and other such.

But that is not the case for the majority of those who elect to emigrate. They do not have much, if anything, to lose but yet all and everything to gain. Yet, upon entrance into their new country, they discover how everything within it is foreign to them and their experience till now. Some are able to adapt readily, others not. The latter became a burden to the natives who resent seeing their taxes being depleted in sustenance of the new emigrants, often of a different race or color. Forgetting that we all came here from elsewhere, it does not take long before disapproval and bitter resentment set in. As always, politicians are skillfully, secretly, sneakily observing from the above, assessing waters, ready to masterfully and manipulatively benefit from such situations by further inflating anger and antipathy of the masses, for their egotistical political advantages.

Someone wisely stated that history repeats itself. Present-day stresses in Europe prove this to be so. Politics and sentiments within countries constituting the continent are shifting towards the right. The more bulbous the influx of strangers, without whom European population, labor force and therefore economy, would progressively wilt away, the more effective the message of racial prejudice. And this is not just towards the new migrants but traditionally includes other such minorities as Gypsies and Jews of course. Imagine, what would the world do without Jews? Anti-Semitism, and such isms or scapegoats nourish humans thirst for a sense of superiority.

Have you ever considered what would happen if suddenly all the borders were unsealed and all the restrictions on travel were lifted and people were free and able to go and move to wherever they wished to? I deem that this is a surprisingly worthwhile and mind-bogglingly poignant enquiry. For the entire dynamics of the world’s population, economic and political systems would shift before our eyes like a tsunami. I deem that boarders were designed to maintain a status quo.

After so many years I recall a related witticism spoken of back in Eastern Europe. The question was: “What would happen if our border was suddenly opened for all to leave the country”? The reply: “The only people who would linger would be Jews, mulling over whether to leave or stay.” And yet the “others” call us the “smart” people, but at the same time despise us for the passion for knowledge, for economic foresight, talent and achievements in science and the arts as well as other disciplines. And then what happens, anti-Semitism erupts and off we go once again. In turn the “Chosen Ones” ask of the God: “Why don't you choose someone else for a change?”

Yes, I know I am drifting off the subject, but I enjoy it. After all, as the author of this blog, I am in control, right? Yet, even if unaware of it, the reader has the ultimate power to simply tell me off, by not reading it. It reminds me of me as a little brat back in Eastern Europe under Communism. Many people there were relentlessly complaining about how lousy life is and how, if they only could, they would pack up and depart, ideally for America where the gold lays on the ground for everyone to pick and enjoy. I also imagined that cowboys and Indians were still roaming free.

The Western participants of my workshops, and students of my mentoring, often but not always, vary in their national origin as well as economic, social, educational or cultural backdrop. One of the most enthusing of programs I was fortunate to launch was in the American Midwest, a land that can often be deprived of external infusion of cultural, intellectual, ideological or artistic diversity. The early students came from simple farm families. I recollect the initial ones. I referred to them as my pioneers. They were white guys, strong, massive, confident and determined to learn the skill so to get a job in one of the giant studios where people are altered into “human tools,” gears contributing to the working of a massive production machine executing ideas and visions of the few at the top.

I designed the program to draw inspiration and diversity of thinking, perspectives, methods and ideas from the visiting artists, scholars or festival directors whom I invited from around the world. This vibrant and ever shifting milieu resulted in a radically varied exposure challenging students to determine for themselves whose ideas, thinking, approach and visions they find most relevant to themselves as individuals. It forced them to think for themselves, instead of being told how to or what to think. If I may say so myself, it was a brilliant design. I wish more academic settings were willing to adopt such a model, instead of turning themselves in stagnated pools of waters.

Thus, only after a few months, my students determined for themselves that what they truly wish for is to become autonomous artists and filmmakers. They concluded that being independent is too exciting, empowering of visions, to give it up for becoming a pawn in someone else’s hands.

By having the fortitude to do so they not only surprised me but contradicted and abolished my anticipations of what I might expect from such seemingly simple individuals. They proved me all wrong, they, yet again, reconfirmed that generalization can be prejudicial or hurtful to everyone.

While proven wrong, I was proud to see what an amazing impact my method is able to produce and how young people’s lives and their whole futures can be enriched and reinvigorated through a global exposure to marvelous and contrasting ideas, stories and the creative talent living and practicing their craft in the far away distant lands. Bringing the World to the Midwest was a thrill.

Shifting time forward, I recollect the recent workshops in the most northern part of Western Europe. As I mentioned above, those I mentor differ in their national origin, economic, social, educational or cultural backdrops. The more assorted the more rousing a discourse and distinctive the ideas and perspectives. In one of the most northern European countries I was very kindly invited to, I encountered students who while interested in what this stranger had to say, were not really open to altering their minds or opening them to the “gravity free and reality independent” thinking. Similarly to my earlier Midwestern students, these too were all homogenous in origin and ideas.

Theirs is one of the most stable, calm and peaceful countries. Economically, politically, socially constant an environment, except for the newly arrived, unlike in their look or customs, emigrants from the southern half of the world – they’re the part some of those living on top may not be able to see when looking down below, or maybe not wish to do so? Despite such influxes resulting in the reawakening of old radicalism I spoke of above, all was well. Life is good. They were confident of where their professional futures will land them upon their un-doubtful graduation. They were here to learn the essential skills expected of them upon departing for the career outside of their university, but within know security of the country within which this very university was located.

While they were truly polite young people, I do wonder whether they were not stupefied by this far away, peculiar stranger, speaking with an accent of ideas that were challenging their reality. Especially when I proposed to them to: “pull condoms off your minds and have an unsafe idea.”

So, given the two groups of students I referred to immediately above, one in the Midwest, the other in the wintery land of northern Europe, both composed of young Caucasian people matured in stability, why did their reception of my ideas differ so? I do not think that it was the climate. So what? One definite factor was the amount of time I spent with them, long in Midwest and very brief in northern Europe. But was it also due to the hunger the Midwestern students instinctively felt as a result of limited exposure to mind challenging contrasts they were growing up in? And hence this is why they began to thrive within the international program I had designed for them? While those living in the northern Europe did not sense such a void, for they were growing within reach of everything the entire continent and all its various countries and cultures have to offer. If that is so, than intellectual hunger, curiosity and willingness to open one’s mind prove to be vital.

As for me, I strongly believe that we are able to learn more from mistakes than successes. That is why an occasional resistance I encounter forces me to re-examine my methodologies, but also stance on the world and humanity at large. I find such challenges revitalizing and enriching.

Animated Characters: The Art of Babbitt – Part 1
Bruce Smith and Ralph Farquhar Talk ‘The Proud Family: Louder and Prouder’ Season 2
VFX is the ‘Thing’ for Tom Turnbull on Tim Burton’s ‘Wednesday’
We Need to Chat
Choc Chip Animation Riffs on Pop Culture in ‘The Art of Murder’
F is for Flake: The (Not So) Great Animation Robbery?
Re-VIEW: ‘Avatar: The Way of Water’ – A Miraculous Vision
‘Kung Fu Panda: The Dragon Knight’ Celebrates a Special Lunar New Year
END_OF_DOCUMENT_TOKEN_TO_BE_REPLACED