Imagination Workshops and the World at Large: Part 3

Continued reflections on how society has a critical need for igniting and cultivating imagination as the origin of all ideation, inspiration, invention and innovation.

The Mao era proved devastating to China, its people, their traditions, history and, by some accounts, 5,000 or more year-old culture. On one of the several trips I took while living there, I saw the incredible colossal Buddhas curved into mountains. They were breathtaking in artistry. Looking up at them I wondered, if such majestic triumphs were spared by Mao’s army in their purging of the best of their culture, art, heritage or traditions, then imagine how astounding were the masterpieces which did fall prey to their, then, brainwashed and shortsighted masses.

It’s no wonder that now, the forward thinking Chinese define themselves as a 40 years old country. It implies that the time since the end of the Mao era represents awakening, shaking off the shadows and pains of the past, the rebirth and the process of rediscovery of its own multifaceted, diverse identity, its own ideas, ideals and attitude towards self-expression. Yet this is just the beginning. Inbred boundaries resulting from deeply imbedded traditions, cultural, political, educational, social and family upbringing pose foremost difficulties for young people trying to find their own voice, and chiefly when it comes to discovering their role in the fast shifting realities of their now awakening country and its attempts at redefining it lead role in the world. This is an exciting time for China! In my view this is whether the future of civilization within this century will be redefined.

Traditions are hard to break out of. The “loss of face” is still very constraining and daunting, and so is crippling risk aversion. While some in the West consider mistakes vital to the creative process, to Asians they signify failure. Hence their reluctance to expose emotions and deepest feelings, especially since, for ages, keeping everything within has been the norm, tradition, the safe way to progress through life, even if at a cost of being unnoticed. Now however things are changing and brand new opportunities are beginning to emerge. The need to stand out, to be different from the vast masses within the booming China, is vital. Finding the right balance has become a tricky art in itself. This is especially crucial, given that the Big Brother is well, listening, watching, probing and judging. In such a background it takes valor to come out of the shadows.

Yet, once empowered to do so by the class I offered, invited to distill and reveal their emotions and ideas, many of my students chose to take advantage of this unique opportunity to come out, to be seen, heard and recognized for who they are as individuals, as artists or creative and passionate human beings. Thus unleashed from the status quo, they transformed into fountains out of which poured forceful emotions, visions, ideas, aspirations, dreams, fears and hopes.

Despite my expectations or anticipation, my digital arts and design class attracted multidisciplinary students from animation, film, game or interactive design, coding, but, totally unexpectedly, also from programming, IT, automatic language translation and even law. All found that defying the status quo, challenged their minds, amplifying visions and horizons, empowering and enriching their self-awareness and their voice, ignited their ideas and weight of personal self-expression. Besides, exposing them to potent examples of global creativity was eye opening. Half of them did not know how to draw, they were not artists or never attempted to do it before. Yet that did not stop them. Allowing them to utilize traditional or digital, still or motion, 2d or 3d, visual art, designs, photos, collage, cut-outs, dimensional constructs, even the most basic match-stick sketches, synopsis, sculpture, mixed media or any medium of their own concoction, empowered them as magicians and Creators. Some, eager to share deeper stories, resorted to storyboards.

What I also found striking was the amount of energy, effort and commitment they employed to create their own unique assignment. Despite the practice of plagiarism being openly acceptable, even prominent in China, once the students understood that duplicating the work and ideas of others simply deprives them of their own opportunity to challenge, to discern and to share their own ideas or visions, they truly gave their all.

Thus having to resort to translation did not in any way impact their fire. On the contrary, their enthusiasm actually fueled my thrill of mentoring, embracing and furthering their appetites. 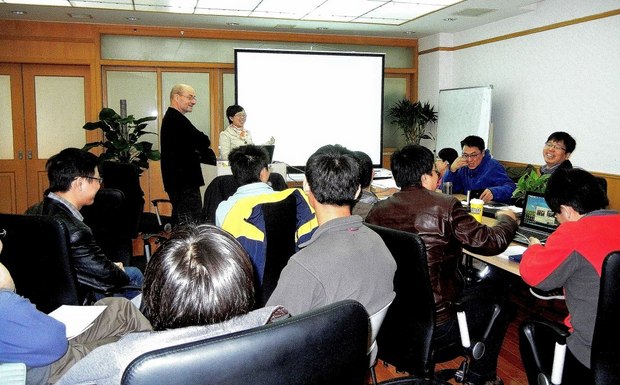 And when I state “gave it all”, I do mean ALL. They did not hold back, on the contrary. Despite the themes of the class being deeply personal and provocative, some of the utmost imaginative ideas, emotions, fearlessly exposed hopes and fears, and even political sentiments were more revealing of their authors than many I have encountered anywhere else around the world, and I have been a few places. They not only did not fear fully exposing themselves, they welcomed it.

Why so? Because they felt entrapped within a system intended to bind their minds and impede their self-expression. They were hungry, starving to define and demonstrate their individualities. I deem that such qualities are shared by most of humanity, although much of mankind is unaware of it. Else their potentials for discovering and redefining themselves is kept subdued by those above or conquered and drowned in contentment extended by consumerism, materialism, pragmatism…

When it comes to grades, I am very demanding and unbending, but in my mind rightfully so. Yet upon return for another semester I was stunned to discover that the number of students wishing to take my class has more than doubled. To me it illustrated how hungry and fervent to discover themselves and their own voice they were. It also exemplified how deprived they must have felt of other opportunities for explorations which my class invited, and for empowerment we all desire.

I was touched, proud and rewarded by their trust in me. After all I was a total stranger coming to them out of the blue, and trust is not easily earned there. Yet after only one class, one week, they were willing to plunge after me into the “gravity free and reality independent” space that was utterly unknown to them. Their actions, their eager desires proved me wrong, incorrect, erroneous, dispelling my assumptions of who they will be, or be capable of, or willing to attempt. My contract concluding, it was truly touching to watch many of them cry as we parted ways. Time for a change. Change is good, without it many of us turn into zombies, androids continuing through life unchallenged to distil and purify within us that which makes us who we truly are, that which defines us as individuals and dictates what it is we are willing to stand up for and fight for.

As though from hot to cold, from one extreme to another, immediately after China I found myself in a few Western countries, invited there to present and to brainstorm, or conduct my workshop. These so called 1st world countries are considered to be not just developed but also democratic. Life within them is pleasant, stable, secure, calm, even tranquil. For the greatest part, a majority of their citizens are proud of their countries and, excluding some minor murmurs, lead content and fulfilled lives. Their political and economic systems assure them of calm continuity and wellbeing which these people have labored for and hence grown to consider to be their hard earned right.

Over time they learned to take it all for granted. And why should they not? How many people do you know who are restless, never placated by the status quo, eternally curious about what might there be on the other side of the mountain, or across the seas, or what realities prevail on other planets within this vast enigmatic Universe? I know just one and he leads a restless nomadic life.

The Massive Creative Fellowship Behind ‘The Lord of the Rings: The Rings of Power’
‘The Dragon Prince’ Director Villads Spangsberg Talks Toonlines and Tough Challenges
Laurence Fishburne and Steve Loter Talk ‘Marvel’s Moon Girl and Devil Dinosaur’
Taking an Old-School VFX Approach in ‘All Quiet on the Western Front’
‘Natural Habitat Shorts’: Like ‘Ranger Rick,’ But for Adults
Framestore Sets Sail on ‘1899’ with New Virtual Production Tools
VFX is the ‘Thing’ for Tom Turnbull on Tim Burton’s ‘Wednesday’
We Need to Chat
END_OF_DOCUMENT_TOKEN_TO_BE_REPLACED