I Wanted to Walk Out of Kantor’s ‘Letter to a Pig’: But This is Not What You Think

Some narrative animations owe their brilliance to simultaneously evoking pleasure and angst. 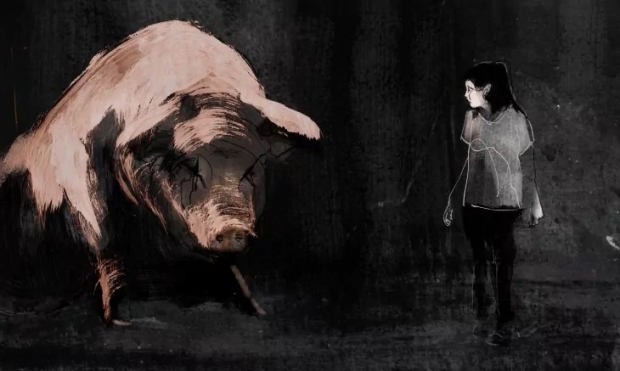 After two years in COVID purgatory, I was eager to join the animators at OIAF, 2022 and watch the gems with the creative crowd. But at 7 minutes into Tal Kantor’s Letter to a Pig, I wanted to leave. This is not a criticism of Kantor or her film; it’s a tribute.

Letter to a Pig, written and directed by Kantor, co-produced by The Hive Studio and distributed by Miyu Productions, is a beautifully styled, emotionally charged story about a Holocaust survivor, Haim, sharing his memories of the horrors to a classroom of teenage students. Haim’s experiences included not only the anguish he suffered, but the moments of respite he garnered in a pigsty he hid in, and his gratitude to the pig Haim insists saved his life.

But the focus of the animation is not only on the survivor. Much of the film is revealed through the reactions of one student, Alma. Kantor, an independent animator, and lecturer at Bezalel Academy of Arts and Design in Israel, based her animation on her own reactions as a student, along with her classmates, hearing survivor testimony. Indeed, the final act of the film is motivated by a dream she had about this experience. As Kantor described at the OIAF’s Meet the Filmmakers, “it’s a mix of memory adapted to the subconscious of dreams that reflects and distorts.” The pig was the subject of her dream, provocatively questioning “how small creatures can become monsters,” contrasting the justification for the pig’s lynching to the final sequence which sees Alma transform him into a piglet.

Significantly, Letter to a Pig deals with the psychological and pedagogical implications of presenting this tragic history to younger generations who have no access to personal or familial recollections. Kantor wisely added that “school kids may have to deal with the discomfort in hearing these memories, and with “emerging feelings of loss” that are acted out as boredom or laughter or cringing with despair. Interactions between the survivor, Alma and her classmates, and the pig are revealed in an animation that is elegant and sparse in its visual presentation. Kantor restricts the figurative to two main devices, stylized 2D line drawing, and 3D texture on live-action elements.  Interestingly, the more abstract 2D lines guide the motion instead of the more realistic 3D composite. Color in the figures is similarly deliberately restrained, although the background palette and style dramatically change in the concluding dream sequence. The pacing and editing highlighted the emotional realities of the survivor and the students, with nuanced application of color signaling an empathetic relationship between Alma and Haim during his dramatic testimony.

Yet the expressions and actions of the other students are either blank or hidden under the guise of nervous laughter or humor. Notably, one boy “oinks” when Haim speaks about his gratitude to the pig. And it was this student’s expulsion from the class that led to a shift in Haim’s relationship with the students as he transforms emotions of grief and gratitude to something more sinister.

When the student finally exits, Haim sighs. His tone becomes harsher as he looks at the students’ blank or bored faces. He recalls the events not only leading to his entrapment, but the entire inhuman treatment and murder of Jews under the Nazi regime. He states that he wanted to kill the Nazis who forced him to hide in the barn and encourages the students to feel and do the same. “Anyone capable of such hate, doesn’t deserve to live”, he says as Tal slowly lowers her head. Then it cuts back to Haim, focusing on him and the glass of tea and biscuits the teacher had given him. At 6:14 minutes into the film, Haim confesses that “For years, all I could think about was getting revenge.”

At 6:16 minutes, he elaborates, “wringing their necks one-by-one”, He was old, but I recognized him.” Alma shrinks lower in her seat.

“So, I followed him.” The focus is only on Alma’s eyes.

“And, let’s just say, I took my revenge.” The focus returns to Haim.

“At least on one of them.” Alma shrinks even lower down.

At 7:05 the biscuit dissolves. At 7:10 I wanted to stay and follow. Alma, who has been shrinking lower and lower as Haim speaks, is now under her desk, and a few snowflakes are falling behind her. Still hiding, Alma’s classroom chair legs become verticals that ultimately become trees in a forest.

I am not an average viewer. My cognitive research into the knowledge and skills needed to animate, the hundreds of animators I’ve observed and interviewed as they created their art, not to mention my lifelong obsession as a film-lover, makes me an “expert spectator” in playing the game of spectatorship. I frequently identify my feelings and emotions of the animated world together with my “objective” deconstruction of what is on screen, and how I’m being seduced into this alternative reality. This meta-reflection switching between “feeling” and “thinking” hasn’t disrupted my enjoyment as a viewer. Indeed, as studies have proven in an associated phenomenon, the common assumption of “spoiler” alert is not accurate. We can know that what we are watching is a previously viewed “fake” reality, and still be engaged in re-experiencing it. (Don’t you ever rewatch movies?)

But even more relevant to viewing Letter to a Pig was my real-world, prior-life expertise in Holocaust history, research, and presentation.  I related to Kantor’s characters and story in deeply personal and profound ways.

So, what freaked me out, with all my cognitive knowledge and experience? Samuel Coleridge would agree with my tweaking his “willing suspension of disbelief;” I was too immersed to “suspend belief” in the unreality of the animated world. I was gripped by overwhelming emotion and feelings. It wasn’t just the sadness I felt listening to the story of a Holocaust survivor relating his experiences to a group of teenage students, nor my smirking at the macabre humor of students attempting to avoid really engaging with his testimony. It wasn’t making or avoiding the complicated judgment of the ethical morality of revenge. It took me a minute (it seemed like more, but the nature of human time perception is another blog) to realize I was feeling the complex emotion of “awe.”

“Awe” in aesthetic psychology is most often twinned with “the sublime,” and typically affiliated with the pleasure of beauty. But there is more research on the complicated duality of pleasure and fear in the sublime. Pleasure can emerge from perceiving scenes, situations, or people that are all-encompassing, grand, powerful. But these same situations may provoke feelings that are contradictory, like pleasure and fear, admiration and disgust. Less studied is the duration and potential flipping between these emotions or feelings.

The trigger for me was the visual realism and slow disintegration of the biscuit, a seemingly unimportant prop in the story, one that carried no intrinsic narrative significance. Nor was it an object that has any direct reference to the biscuit having a state of consciousness that I could empathize with. Maybe it was whatever motor or mirror neurons (this latter is a controversial term), were engaged when I felt I was mimicking the biscuit’s “dying.”

But time stopped when I saw it. I disintegrated along with the biscuit, first feeling extreme discomfort, then feeling admiration for the creator of this illusionary state.

“Awe” was my being overwhelmed by the all-encompassing experience of seeing, feeling, and thinking about every animation element and detail that Kantor exquisitely crafted and controlled to manipulate me into this emotional state. But it was also my respect, my awe, my gratitude for her ability to get me to this state.