Before you run off half-cocked with that shiny new animated six-shooter of yours, here are a few pieces of advice that will help you live long and prosper in this business. It would be foolish to think you could become a good animation writer without first understanding a little bit about creativity, especially considering cartoon writing is one of the most creative forms of writing there is. Fortunately, creativity is not as ethereal as some might lead you to believe.

"Writing for animation is both an art and a discipline, and Jeffrey Scott is terrific at teaching
others what he's mastered himself."—Jeffrey Katzenberg, DreamWorks Animation 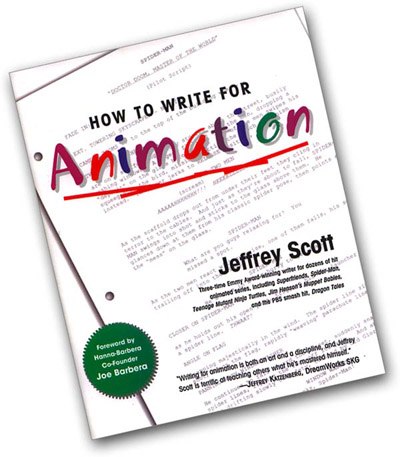 The following is an excerpt from Jeffrey’s book, How to Write for Animation...

How to Prosper in Toon Town

BEFORE YOU RUN OFF HALF-COCKED with that shiny new animated six-shooter of yours, here are a few pieces of advice that will help you live long and prosper in this business.

It would be foolish to think you could become a good animation writer without first understanding a little bit about creativity, especially considering cartoon writing is one of the most creative forms of writing there is. Fortunately, creativity is not as ethereal as some might lead you to believe.

The reason most people think creativity is such a mysterious thing is probably because “authorities” have written so much on the subject that it begins to look pretty complex and unfathomable—left-brain versus right-brain, the unconscious, chemical reactions, gifts from God. The list goes on and on. There are great gobs of confusing theories on the subject of creativity and its origin. Some psychiatrists have suggested that creativity and madness are similar, and that to be really creative you must be somewhat loony tunes! Sounds to me like they’ve been watching too many cartoons—or maybe not enough!

If you’ve bought into any of this gobbledygook then you may have already begun to shackle your creativity. Why? Because, by simple observation, creativity can be seen to be totally unlimited. Any considerations you put on it—where it comes from, why you have it, why you don’t, what drug makes it better, which one makes it worse—are simply creative considerations themselves. Believe it or not, thinking the wrong thought can get in the way of being creative.

Although these considerations may work for these writers, I never agreed with any of them. I simply chose to believe that I could create at any time, on any subject. That’s what I’ve been practicing my entire career. So you’re free to believe you can only get good ideas after deep breathing and yoga, or after sex, or whenever, but you’re only going to limit your creativity.

Creativity begins with getting an idea, and there are an infinity of ideas. All of us are inherently creative. We get new and unique ideas all the time. The writer’s job is to communicate ideas in such a way that they maintain the interest of the reader or viewer.

Interestingly, the most common question I’m asked as a cartoon writer is, “Where do you get all your ideas?” My first response is usually the line I gave to Gonzo in the “Romancing the Weirdo” episode of Jim Henson’s Muppet Babies:

GONZO
All good ideas come from my nose.
Though now  and then I get a pretty
good one from my elbow.

Seriously, I get my ideas from the same places everyone else does: travels, social encounters, day-to-day experiences, movies, TV, books, newspapers, dreams, past lives.

That’s right. Ideas can come from anywhere, even past lives. Whether or not you believe in the phenomenon is not the issue. What’s important as a writer, is to be willing to experience anything. Because if you can’t confront an idea I can guarantee you that you won’t be able to write about it.

The fact that I was open to the concept of past lives gave me the opportunity to get a great story idea. Many years ago I vaguely recalled a past life experience about being in some kind of slave mine. The most oppressive thing about it was that the mine was only four feet high, so that everyone had to work while crouching over. This made it hard to dig and even harder to escape. I didn’t think much of it at the time, but a few years later a producer asked me if I had any ideas for an animated feature. I started looking closer at my slave mine “experience,” and it blossomed into a fascinating story about a slave society that knew only of their mine world. There was no outside world to them, nothing to life but eating, sleeping, and digging. In fact, they had a myth that told them to never dig up—up was hell. Then, while digging in the mine, the young hero of the story uncovered an object which spoke to him, telling him that his freedom would be found in the world above. He defied the rules and dug upward until he broke through to the surface of the planet, where he discovered that his people were being unwittingly forced to mine fuel for the starships of an evil empire. Our young hero wound up helping to free his people from bondage. I wound up selling the screenplay, which was released in 1984 as Starchaser: The Legend of Orin, the first [stereoscopic] 3-D animated feature ever made.

Moral of the story: Your mind is a virtual gold mine of ideas.

How do you find those few sparkling gems in that mountain of dull ore between your ears? The first thing you have to do is start digging. More specifically, you have to get your ideas flowing.

And if you want to learn how to get your ideas flowing (get ready for the shameless plug) just click on the book and buy a copy!