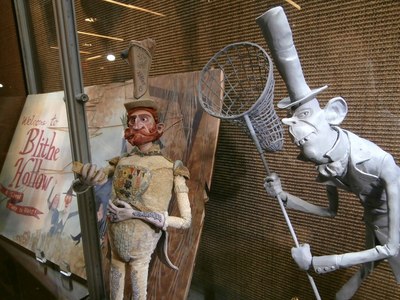 How’d you like to own the doppelganger doll that sent Coraline on an adventure into another world? Or one of the creepy Paranorman zombies? Or maybe you think the amazingly detailed “Boxtroll Exterminators” wagon belongs on your mantelpiece.

Well, as the lottery ads used to say, “all it takes is a dollar and a dream.” That’s the opening bid on every one of the 266 lots from the studio’s archives when Heritage Auctions’ LAIKA event begins Thursday, February 12th.

Chances are though you’ll need a lot more than that single Washington. “Everything starts with us at one dollar,” says Jim Lentz, Heritage’s Director of Animation Art at the company’s NYC Park Avenue gallery, where a tasty assortment of LAIKA goodies made a pit stop on their way to the Beverly Hills auction.

“The market determines where it winds up. I think the puppets are going to go anywhere from $1,000 to $5,000—and if two people have to have it, it will be fun to watch.” Why is LAIKA giving up such treasures? “I don’t think it’s to raise money for their next film,” Lentz adds. “I think the real emphasis for LAIKA was to get their name out there, get people to know who LAIKA is.”

If the event is to raise money for anyone, it’s for The Art of Elysium, a Los Angeles-based group using art to help bring about social change, who will be receiving a portion of the event’s proceeds.

Items up for grabs include actual LAIKA production puppets, props and sets, test models and concept art. (Similar Pee-wee’s Playhouse items and limited edition Walt Disney character maquettes are also on the auction block.) Can’t make it to Beverly Hills on the 12th? Thanks to the internet you can bid via your computer (or just watch the auction progress and drool) by downloading the “HERITAGE Live” program from ha.com/Live/.

“Can you imagine if you owned the original King Kong, or the original Rudolph the Red-nosed Reindeer stop-motion puppet?” Lentz asks rhetorically. “That’s the opportunity here because this won’t happen again.” An Interview with Priit Pärn
‘Baymax!’ Provides an Rx for Humor and Compassion
How Digital Domain Brought Photoreal Characters to Life in ‘The Quarry’
SCAD GamingFest: Building Shared Story Experiences with Diverse Character Design
Mission Critical: ‘Lightyear’s Journey to Infinity and Beyond
Putting the Fun in Dysfunction: The Non-Humanistic Therapy of ‘HouseBroken’
‘The Freak Brothers’: This is Your Humor on Drugs
END_OF_DOCUMENT_TOKEN_TO_BE_REPLACED