The Future of Animation 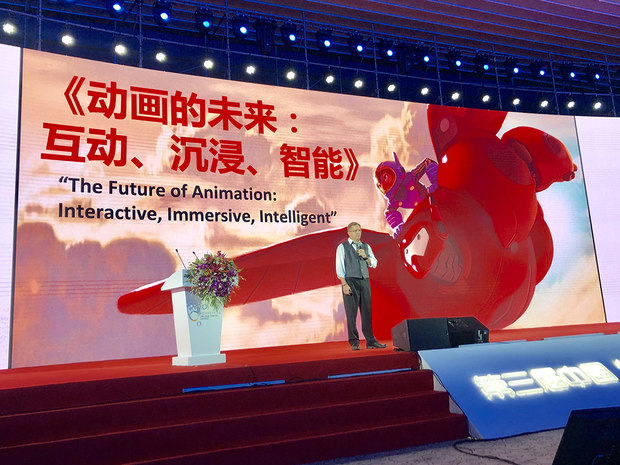 Earlier this month, I gave a keynote address to an audience of Chinese media industry professionals at the China Online Literature+ conference in Beijing, entitled “The Future of Animation: Interactive, Immersive, Intelligent.” While I don’t pretend to have a crystal ball, I wanted to highlight three areas of burgeoning activity - interactive content, virtual production and artificial intelligence - with respect to their transformative effect on the animation industry and the historical arc of storytelling. Given that my 20 minutes of stage time would only be 10 minutes of content due to translation, I took a topline approach with three key 60-second points for each of the three areas. More than a few folks who subsequently saw photos of my slides from the event have asked me to elucidate. Because I speak extemporaneously, the following is not a transcript, but more of a “memoir” of my presentation...

Interaction is essential to our lives. As humans, we interact with others from the day we’re born until the day we die. Life is interaction. Irrespective of how outgoing or reserved we are, we need to interact with other people on terms that are satisfying to us while acceptable to others. Essential survival skills such as influence and negotiation are learned and refined through interaction.

We find satisfaction in cause-and-effect. In virtual reality, people quickly tire of being virtual ghosts, especially (and perhaps ironically) in more compelling immersive environments. Human beings want to be involved. There is a fundamental satisfaction in seeing something or someone react to our intention, whether bowling a strike or catching someone’s eye. Cause-and-effect is an essential aspect of storytelling. We enjoy watching things play out as anticipated, and are even more intrigued when twists and turns surprise us, while remaining believable.

Game design is merely one application of interaction design theory.

Gaming has always had a perception problem. From craps to Doom, gaming is usually perceived as frivolous and sometimes downright dangerous. Yet games are serious business. We can and do use games to understand the world, each other and ourselves. The field of game design can be more properly understood as a subset of interaction design theory, which encompasses every conceivable human endeavor. Virtual production is about point of view. Virtual production scales up and down. Virtual production is incorrectly assumed - both by current and prospective practitioners - to be an expensive proposition requiring millions of dollars and dozens of technicians. High-end, high-fidelity virtual production can indeed be as complex and expensive as a major studio can afford. But the good news is that grassroots virtual production can be employed by individual in their homes, with off-the-shelf hardware and software, and perhaps with more interesting results than studios constrained by massive recoupment considerations can afford to entertain. Which brings us to our next point...

Virtual production is not tied to realism. Given current mass market visual effects manifestations - such as the aforementioned Lion King remake - most people incorrectly associate virtual production with photorealism. But the core value proposition of virtual production is related to conceptualization, not execution. Virtual production can (and will) encompass an unlimited range of artistic expression - from photorealism to abstraction. This will most likely occur (as most innovations do) on the independent end of the creative spectrum, before being adopted by the commercial end as it pursues cachet and “street cred” when audiences become bored with the status quo.

Artificial intelligence is less advanced but more pervasive than you think. When a computer achieves a milestone (such as Google’s AlphaGo beating reigning human Go champion Lee Sedol in 2016), people are quick to infer intelligence and intuition where none exists - perhaps due to our tendency to anthropomorphize. We assume (and the media fans our fears) that it is only a matter of time before the machines come for us. But just because my watch can tell time more accurately than I can doesn’t mean it’s smarter than I am: it’s a tool that I use. AI technology is no different. Hype aside, we’re decades or more away from anything approaching general artificial intelligence (if you don’t believe me, try asking one of Boston Dynamics’ robots to get you a decaf latte). However, AI doesn’t need to achieve self-awareness to cause massive disruption economically, socially and politically. The cold hard fact is that most of what people do in the modern world is predicated upon recognition, retrieval and repetition... and barely requires self-awareness. Easy pickings for AI displacement. If a large portion of the world’s population is going to be unemployed, they’re definitely going to need to be entertained. And interactive experiences - from humble mobile phone chatbots to expansive immersive environments - must be imbued with “intelligence” to naturally respond to unpredictable, organic input. Retrieval systems are ultimately unconvincing, and quickly fail the Turing Test (whether or not the user is aware they’re applying it). Generative AI environments and agents will be required: incorporating high-level machine learning technologies such as image recognition, fuzzy logic and natural language processing. AI will provide immersive access to fictional characters on a personal level, letting us relate to them as old friends who talk to us, interact with us, share their thoughts with us, and remember us. Virtual beings seem to be aware of you and engaged with you, not because they have been animated to do so, but because they are reacting to you. Virtual beings can exist in any digital medium, and will freely cross platforms to accompany you when and where you like. While the beginnings of such AIs exist in the form of digital servants such as IBM’s Watson and Amazon’s Alexa, the essential difference between virtual assistants and virtual characters is in the storytelling. Beyond the obvious technological benefits and socio-political challenges, AI is poised to become the next great art form and storytelling medium: bringing enjoyment (and perhaps even meaning) to our lives, with characters who enter our lives, as we in turn enter theirs.

So there it is. Food for thought. Grist for the mill. The future of animation will first and foremost always be predicated upon creativity, which includes innovative application and expansion of the technologies at hand.

You can’t stop progress, but you can steer it (or at least nudge it a bit).