Putting Nordic/Baltic Animation in the Spotlight - The Frederikstad Animation Festival presents the opportunity to see the best of the Nordic and Baltic animation, much of which is not shown at any other festival. 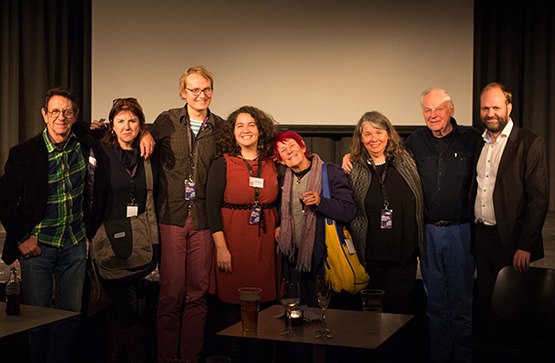 The Fredrikstad Animation Festival is always a treat because I have the opportunity to see the best of the Nordic and Baltic animation, much of which is not shown at any other festival.

All of the films in the competition are from the Baltic/Nordic area.  My favorite film was Machine by Danish animator Sunit Parekh-Gaihede.  His stop-motion film is about two people whose son is killed in a terrible accident soon after they move to a new town.  The grief and tension between the couple is heightened by the light streaming through the windows which creates deep shadows.  The layered story and dense  beautifully lit visuals gave me the feeling that I was watching a flower unfold, bloom, and then wither. The title of the film comes from the giant machines that are digging up the streets filling the air with dust while the residents of the town go about their business unaware of the child who has been “eaten up” by a machine. Life With Herman H. Rott is one of the funniest relationship films I have seen in a long time.  Chintis Lundgren, an Estonian animator who now lives in Croatia, uses drawn animation to tell the story of Herman,  a hard drinking, chain smoking black cat.  He loves loud music and isn’t bothered at all by his very messy apartment.  Herman’s life changes radically when a petite white cat, who is very tidy and cultured but has a weakness for messy, macho tom cats, decides to move in with him.  She brings a vacuum cleaner, piano, and her collection of classical records with her. Life will never be the same for either of them again.

Norwegian animator Torill Kove won an Oscar in 2007 for The Danish Poet.  In 2014 she was nominated again for Me and My Moulton about the bicycle that she and her sisters dreamed about having.  Redesigning Christmas is another film about her family.  In this one minute film her parents, who are both architects, decide to redesign Christmas - the tree, the presents, and the cake, remaking them all over in simple, clean design lines.  The daughters are once again mortified by their parents and even worse, they worry if Santa will be able to get down the contemporary chimney on the family’s flat roofed house.  Reclaiming Christmas is not a major film but it does touch a chord and reminds one of all of the times we were embarrassed by our parents while growing up.

The Student Competition was particularly strong this year.  Velodrool by Sander Joon, a student at the Estonian Academy of Arts, won the Fredrikstad Festival Grand Prix.  Sander uses black humor to tell the story of a bike rider who is addicted to smoking.  When he runs out of cigarettes he joins a very irrational bike race.  Along the way he gets help from some very peculiar spectators to stay in the competition.

The Professional and Student Jury said in their statement “This film (Velodrool) is an unconventional film that took us by surprise again and again with an impressive, raw, and expressionistic style”.  The jury was composed of Irish artist and film maker Alan Holly, Norwegian producer and scriptwriter Kristin Ulseth, and Uzi Geffenblad, a Swedish composer and director.

Velodrool is Sander’s Bachelor Thesis Project at the Estonian Academy of Arts, and I could definitely see the influence of Olga and Priit Parn, two of his professors.  Fredrikstad Animation Festival is one of the eleven partner festivals in the prestigious Cartoon d’Or competition which is the only pan-European prize especially for animated films.  By winning the Fredrikstad Grand Prix Velodrool is qualified for the 2016 Cartoon d’Or which will be awarded at the Cartoon Forum.

On Saturday it was Family Day, and also the competition for Children’s Films which was judged by a group of young people aged six to ten years old from the Fredrikstad area.  There was a free program of short films designed especially for young film goers.  There were also screenings in Norwegian of Tomm Moore’s beautiful Song of the Sea and the Norwegian feature Two Buddies and a Badger for the younger set and their parents.  For older audiences, Hiromasa Yonebayashi’s When Marnie Was There was presented. Lisa Aisato from Krakerøy, Norway also read from her book Odd is an Egg.  She explained to her young audience how the story was transformed from a book into an animated film.  The cinema lobby was turned into a hands-on area where young people could try their hands at making their own film. There was also a button making station and several other animation related projects which required no prior knowledge about animation to participate in.

Although the emphasis of the festival is on Nordic/Baltic animation there were special foreign guests.  The legendary Richard Williams and his producer wife Imogen Sutton took to the stage to introduce their new short Prologue along with a new digital reconstruction of The Thief and the Cobbler - A Moment in Time.  Richard’s director’s cut and approved work print was finally released in 2013.  The digital reconstruction was courtesy of the Academy of Motion Picture Arts and Sciences and the Academy Film Archive.  Richard is known for sharing his vast knowledge and in the Q & A session following the film he regaled the packed audience with stories about his life in animation and tips about animating. Joanna Quinn and Les Mills gave a Masterclass.   Both Joanna and Les have wicked senses of humor so their presentations are always entertaining as well as informative.  They talked about their extensive professional background which not only includes award winning films but numerous international commercials, including the Charmin Bear Toilet Paper commercials and their United Airlines ad.  The couple is well known for their films starring Beryl, whose hilarious adventures have won over 45 major awards. The Cartoon d’Or was awarded to Dreams and Desires-Family Ties,  in which Beryl volunteers to video a family wedding with side splitting disastrous results.  They are now at work on Beryl’s latest attempt to find her inner arty self in Affairs of Art.  Joanna said that there is no definite completion date but they hope to have it ready for festivals soon. Waltraud Grausgruber is festival director and co-founder of the Tricky Women Festival in Vienna, which is the first and only animation festival dedicated exclusively to animation by women.  In Fredrikstad, Waltraud gave an introduction to the festival and its prestigious Artists in Residence Program.  The scholarship gives female animators a three month residency at the Quartier 21 Museum and freedom to develop and create projects in a nurturing environment.  After her talk she presented a selection of films from past festivals.

Ilja Bereznickas is no stranger on the animation scene.  The Lithuanian film maker, animator, and caricaturist is a key figure in the Nordic/Baltic scene as well as working internationally.  This year Ilja was the Guest of Honor and the festival paid tribute to him with a retrospective screening of his films and an exhibition of his art work.

From his 1984 film Telephone which he made while he was a student at the School of Scriptwriters and Film Directors in Moscow to In a Perfect World (2010) based on a very funny song, it was a pleasure to see his work on the big screen.

An exhibition of Ilja’s art work was held at Litteraturhuset, the beautiful town library with a restaurant, bar, auditorium, and exhibition space.  His work is characterized by serious themes dealt with in a playful tone that can’t help but bring a smile to your face.  The exhibition also included story boards and cels from his films.  I was delighted when my old friend Ilja gave me one of his beautiful works of art at the end of the festival.  It now hangs proudly in our living room. An integral part of the festival is the Nordic Animation Forum.  The Forum is designed to give Nordic professionals an arena to exchange ideas on current developments and assesses the state of the animation industry in their part of the world.  The speakers ranged from the award winning ani-doc and music video director Jonas Odell, director and creative VFX supervisor Sunit Parekh-Gaihede to childrens book author, director, screenwriter and producer Metsamarja Aittokoski, who has directed several popular children’s television series.

Jonas Odell showed a short clip from his latest project.  The new ani-doc will be about video games and the people who play them as seen from the viewpoint of the television set.  It is a definite departure from his other award winning ani-docs and I am looking forward to seeing it. A festival isn’t a festival without parties and the 21st birthday of Qvisten Animation was the perfect occasion for a fete complete with a specially decorated cow shaped cake.  Qvisten Animation is one of the biggest animation studios in Scandinavia.  Over the years the studio has produced hundreds of commercials, shorts, television series, and music videos as well as being involved in a dozen feature films.  Their latest feature Two Buddies and a Badger was screened at the festival on family day.  The delightful children’s film by Ramus Sivertsen and Rune Spaans is about the two buddies and a badger that live in a tunnel.  One day their lives are turned upside down when a young girl appears in their midst on a quest to rescue her father from the supervillain Rasputin.

The closing night ceremony at Litteraturhuset began with a performance by a local choir and the introduction of special guests.  Next came the awarding of the prestigious Golden Gunnar.  The Golden Gunnar is named after the beloved Norwegian animator and teacher at Volda University Gunnar Strom.  It is an articulated statuette of Gunnar designed by Norwegian animator and sculptor Pjotr Sapegin.  A complete list of the winning films is at the end of this article. Over the past few years I have watched festival director Anders Narvrud Moen, his staff, and volunteers turn the Fredrikstad Animation Festival into a major Nordic/Baltic event, building from its inception twenty-one years ago in Oslo to its move to Fredrikstad fifteen years ago.

My sincere thanks goes out to Anders for the warm hospitality I received and for allowing me to be part of the festival.  You can read more about the festival at:  www.animationfestival.no

From Fredrikstad I traveled to Tallinn, Estonia for the Animated Dreams festival which I will write about next.