That disturbing feeling you get when something familiar suddenly appears strange or “off?” Psychologists call this the “uncanny.” 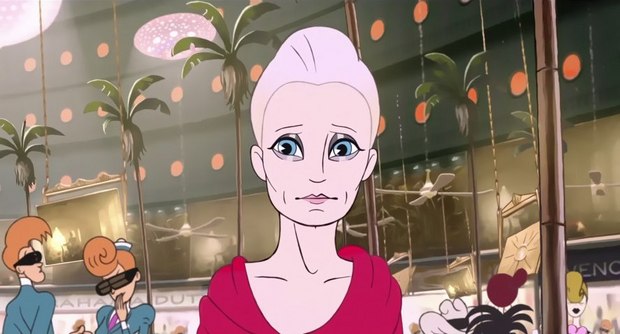 You know that disturbing feeling you get when something familiar suddenly appears strange or “off?” Psychologists have been calling this the “uncanny.”

More recently, Masahiro Mori described the uncanny valley as that dip in trust people feel when encountering a robot that appears too perfect to be real. Likewise, in CGI animation, many critics currently use the same term, "uncanny valley" to describe scenes or movies that seem too perfectly rendered. In all of these uncanny moments with places and people, past memory and present experience somehow don’t mesh.

I was thrown into the “uncanny valley” in Ari Folman’s The Congress. The story is about an aging actress (“Robin Wright” played by Robin Wright) who strikes a Faustian bargain with the studio Devil for eternal virtual immortality and the financial security to care for her ailing son. The film uses live action to represent the “real” and 2D animation for “virtual” worlds. Significantly, the more the plot carries Wright into the future – and the film spans her life from present day until the 2050s  – the simpler the animation gets. Using cinematic techniques to signal a rupture between worlds is not new. Most films reserve the richer effects (vibrant color, exaggerated characters) of animation to define the shift to an alternative virtual space.

In Enchanted, the fairytale world is 2D animation while the real world is 3D live action. Folman’s use of 2D animation in The Congress, while more Bakshi than Disney, similarly flattens the world of virtual reality.

What’s odd about Folman’s technique is that this simplified space doesn’t match with what we think virtual reality will look like in the future.  Folman shows the virtual space as being less dimensional than what we envision for future virtual reality. No doubt the future will bring technologies that give us more 3D CGI animation, more Zemeckis’ Beowulf and less Fleischer’s Koko the Clown.

Folman deliberately avoids the cliché of a more spatially immersive virtual reality by sticking with animation styles that are more in tune with the 1970s than the 2050s projected in The Congress. In effect, the real and virtual worlds are so dramatically different, that the contrast makes us expect less logic from the virtual, and more from the live action drama.

This sets the viewer up for the uncanny.

The uncanny in The Congress doesn’t appear in the 2D virtual world. Instead, the scene that makes me queasy is the live action sequence when Wright treats her son’s growing deafness by candling - applying hot wax to his blocked ear. It isn’t just the fact that candling itself seems odd to me. Actually this is very much in character with the back-to-nature vibe of much of the early story, and the natural, living off the grid, dusty home Wright makes for the children and herself.

What’s startling is how the flame moved.

I consider myself a veteran viewer of most animation and live action film genres. I was raised on equal doses of Fleischer Brothers and Ingmar Bergman, Beauty and the Beast (Trousdale and Wise, not Cocteau and Clements) inspired my doctoral research, and I’ve seen both The Shining and Frozen over 20 times.

Along with many viewers who grew up in a media literate, multi-platform screen world, my mind can easily suspend disbelief within the first minutes of a well-crafted film. Needless to say, it takes a lot for me to be dropped into the uncanny valley.

In spite of this, there are some scenes that just prick the back of my neck. (Actually neurologically speaking, it’s the back of the most ancient part of the brain, the amygdala, the site of primitive emotions).

For example, I feel the uncanny watching minor movements in the people in some of the crowd scenes in The Hunchback of Notre Dame, despite knowing exactly how the effect is done. I feel it in The Polar Express in the way the steam rises from the heater in the boy’s bedroom. I feel it in Finding Nemo when light and floating debris appear in the water. And I feel it every time I view Frozen when Hans extinguishes the candle and moves deliberately to douse the fire warming Anna.

In all these scenes, there is something barely noticeable and unremarkable, just a smidge of unexpected texture, light, or motion in something that I’d ordinarily take for granted.

The “taking for granted” comes from buying into the logic of the narrative genre and medium.

For instance, action movies can get away with all sorts of things that wouldn’t hold up in most romantic comedies. And while CGI-animation can push the boundaries between “it’s only an animation” and “is this live?” until we question where one ends and the other begins, most animations integrate 3D CGI so that viewers can stay in the story world without doubting their sanity.

Folman introduces a “blip” in an otherwise carefully staged and tightly composed live action scene. For a few moments, the candle flame – its shape, the light against the darkened room, its angle of motion, its flicker – seem just enough out of wack to unsettle me without it seeming like an obvious technical mistake.

Besides the uncanny, Folman raises so many deep philosophical ideas that I wonder if I can sue him for mental whiplash.

The Congress covers consciousness, identity, the self, reality, objectivity vs. subjectivity, theories of mind, and more. Daniel Dennett , the philosopher, wrote that philosophers and artists strive to make the familiar strange, which is exactly what Folman does in this film. In fact, I’d paraphrase Aristotle, and say that good filmmaking is philosophy by other means. Aristotle, meet Folman.

Tags
The Congress
Ari Folman
Uncanny Valley
More From Lines of Thought:
Next Post
The Zombie Attack or How Hiring an Artist Can Save Your LifePrevious Post
The Four F’s and Other Animated Truths
Lines of Thought
Authored by:
Janet Blatter

Taking an Old-School VFX Approach in ‘All Quiet on the Western Front’
‘Natural Habitat Shorts’: Like ‘Ranger Rick,’ But for Adults
Framestore Sets Sail on ‘1899’ with New Virtual Production Tools
Animated Characters: The Art of Babbitt – Part 1
Bruce Smith and Ralph Farquhar Talk ‘The Proud Family: Louder and Prouder’ Season 2
VFX is the ‘Thing’ for Tom Turnbull on Tim Burton’s ‘Wednesday’
We Need to Chat
F is for Flake: The (Not So) Great Animation Robbery?
END_OF_DOCUMENT_TOKEN_TO_BE_REPLACED