What do Disney’s Ink and Paint Girls, Joanna Quinn, and Hayao Miyazaki all have in common besides working in animation?  All three of them, and many more of our favorite animators have recipes in Tom Sito’s new book, Eat, Drink, Animate. 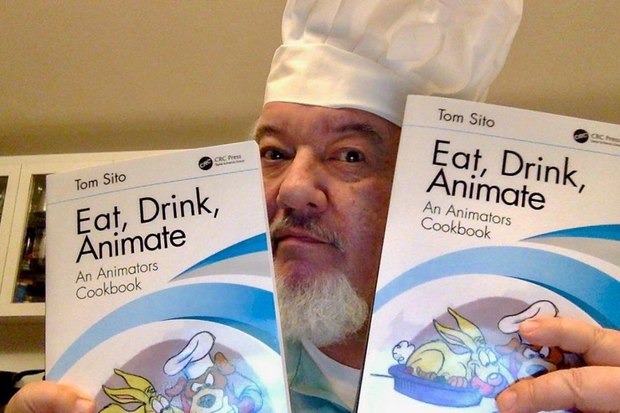 What do Disney’s Ink and Paint Girls, Joanna Quinn, and Hayao Miyazaki all have in common besides working in animation?  All three of them, and many more of our favorite animators have recipes in Tom Sito’s new book, Eat, Drink, Animate.

Along with Mary Blair’s recipe for a Pink Cow and Walt Disney’s Personal Chili, Bill Plympton divulges the makings for his Avocado Grapefruit Salad and Bruno Bozzetto contributes his favorite Spaghetti recipe.  The recipes range from the simplest anyone can make this to the perfect elegant dish for your next dinner party.

Each of the more than 65 recipes is accompanied by a short biography of the animator along with a food anecdote contributed by them or as in the case of those who are no longer with us, such as Joy Batchelor a reminiscence by her daughter Vivien Halas about her mother’s Veal Casserole.   Along with the special recipes, there are never before seen photos and drawing.

Tom Sito is well placed to know many of the contributors to the book.  A veteran animator and animation historian, Tom has worked in Hollywood for over 40 years.  His screen credits include Who Framed Roger Rabbit, The Little Mermaid, and The Lion King just to name a few of the pictures that he has worked on.  He was awarded the June Foray Award by ASIFA Hollywood and sits on the Board of Governors of the Motion Picture Academy of Arts & Sciences.  He also teaches animation at the University of Southern California.

Eat, Drink, Animate begins with “Life in an Animation Studio” written by Tom and a forward by the noted animator, animation historian, and cook John Canemaker.  This is a book that every animator should have, not just for the recipes but for the stories, photos, and artwork liberally scattered throughout the book.

For those of you who will be at Annecy Tom will be giving a presentation on Thursday, 13 June at 18:30 to 19:45 titled ‘Be Our Guest! Animation and Food’ about Eat, Drink, Animate, An Animators Cookbook.  I am sure he will have lots of good stories to tell.  You will be able to buy copies of the book there also.