I’m an artist. I have two Disney plush toys in my studio and I painted them. Am I contravening copyright if I show or sell them?

I make art and I happen to have two Disney plush toys in my studio – Mickey Mouse and Minnie Mouse. The dolls are about 18” tall and came with Disney stamps of authenticity.

So I painted them. That is to say I brushed some paint onto primed supports and the resulting images look a lot like what they're referencing: plush toys that happen to come from the Disney store. (How I come to have these two plush toys in my studio is another story.)

Here’s the dilemma... Now what?

Disney has a reputation for strictly guarding copyright. When I showed the work to some fellow artists at the Ottawa International Animation Festival in September they said, “You’re in trouble.” 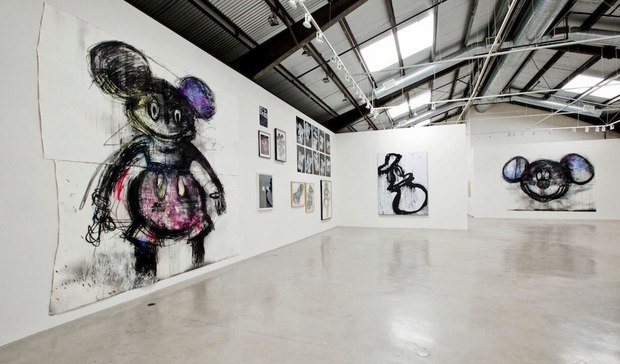 Joyce Pensato paints powerful images of contemporary cartoon characters, including the Mouse couple, Donald Duck, the Simpsons.... And she exhibits them around the world. She recently showed at the Santa Monica Museum of Art. Not to mentiont the fact that her gallery sells them.

Maurizio Cattelan had a drowning? Pinocchio (original Disney toy?) in his Guggenheim retrospective “All” in 2012.

Will our paintings in any way compromise Disney’s rights or their enjoyment of the benefits of such rights?

Over the many years I’ve been an artist, questions related to copyright have come up several times. I’ve even had to consult an intellectual property lawyer. I’m glad to say that I’ve never had to defend a decision, but I’m jittery about the paintings of the Mickey and Minnie plush toys.

How the law is applied often comes down to interpretation and even though the law is structured on precedence, I’m still hesitant to call this one on my own. Not because I’m not willing to defend my rights but because I don’t want to have precious studio time taken up with litigation.

Notice that I’m not concerned here with asking about the law. Or even their interpretation of copyright law. That’s because any legal discussion would first involve defining the particular geographic jurisdiction of those laws. Is it US copyright law that would apply? Canadian?

That alone would be a negotiation in itself.

To cut to the quick I just want to know if the Disney Corporation would send me notice to cease and desist from showing or selling these works, under whatever defence they might want to apply.

To date I haven't heard back. I'm thinking either they're too busy with real licensing issues or they're just not sure. Either way Pensato bless her has set a great precedent.

Tags
Art
copyright
2D
More From Ambling Around:
Next Post
Maria LassnigPrevious Post
Do Degree Art Schools Teach You How to Draw a Form in Space?
Ambling Around
Authored by:
Sharon Katz