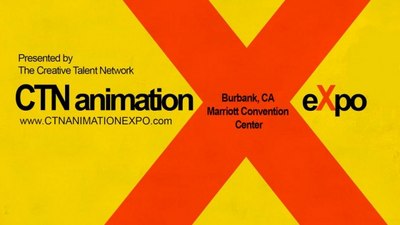 This year’s CTN animation eXpo -- the sixth edition, held in Burbank Nov. 21-23, right before the Thanksgiving holiday -- had a little something for everyone. Make that A LOT of something. With three days packed with panels, talks, demonstrations, workshops, mixers, recruiting events and portfolio reviews, CTNx 2014 kicked off with a pre-show Thursday night screening of Yellowbird, Christian De Vita's 3D animated action adventure produced by French studio TeamTO.

The next morning, crowds packed into the keynote session to watch famed Disney animator Glen Keane discuss his short film Duet, which has been selected to be among the 10 films shortlisted for Oscar consideration for Best Animated Short. Created for Google’s Advanced Technology and Projects (ATAP) group, Duet is the third in a series of Spotlight Stories, which feature interactive short films made exclusively for mobile devices. The perfect blend of traditional, hand-drawn 2D animation and cutting-edge computer graphics and interactive technologies, Duet perfectly exemplifies all that CTN eXpo has to offer. Bringing together the top professionals from both the traditional and digital worlds of animation, CTN eXpo is hosted by the Creative Talent Network, and the confab has more than come into its own, capturing both the industry and local community’s attention as a resource for education, employment, inspiration, and business opportunities.

While it would take a virtual army to cover all the events at the sixth edition of the burgeoning conference and trade show, AWN correspondent Beth Antley had a decidedly traditional take on CTN eXpo 2014. You can read her account, below. There were crowds in every location, lines for this speaker and that new digital tool. It was surprising and heartening to see that there were proponents for going back to traditionalist’s fervor of “keeping the line.” While some of the vendors were touting the newest in digital tools for the animator, there were almost an equal number of those who offer traditional education and examples of current work for the crowd as well. This is good for all of us, whether you are a fan or an artist working within the industry.

The majority of the crowd was newly-minted artists looking for work in the animation industry. There were several lines for portfolio reviews from various studios as well as workshops in creating the modern body of work one needs to break into the field. Demonstrations were mixed in with studio-less artists showing off their independent work and those who were describing the digital pipeline for modern animation production.

In one area of the main hall was a most interesting clash of demonstrations. The NE corner housed a large stage with digital artists hidden behind several flat screens sitting in the dark with computer lit faces and a microphone. The SE corner was a figure drawing station (on Friday and Saturday) filled with artist’s benches facing a stage of models doing two-minute poses. Looking SW, there were tables filled with workstations for digital drawing and tucked into the NW corner, fed from a lane of vendors, was a well-lit, old-school Disney Animation table. Storyboard artist Kris Heller talks about working as a clean-up artist for Disney at CTN eXpo 2014.

For the past two decades the animation Industry has seen an influx of computer-driven productions, almost to the point of it being the only option for the viewer. With the emerging technologies involving 3D modeling, digital painting and lighting, in-betweens being extrapolated by an algorithm, entire sections of the industry moved from dozens of artists with pencil and paper to handfuls of artists operating computers.

While the move to an all-digital pipeline has produced some brilliant work, some of the audience has become disgruntled with the lack of "heart" to the characters and stories they convey. Often opting for re-watching classics or seeking out the independent films produced with more traditional tools, there seems to be resurgence in going back to some of the basics of character animation.

The crowds of onlookers seeking an insight into modern tools found them watching in awe as veteran Disney artists hand drew the in-betweens for a scene with a pencil on paper. Looking to the right and seeing a newer artist’s mouse pointer move sporadically on the screen hitting a digital brush, color and erase button over and over was not enough to hold their attention when to the left was a desk that few had seen in any classroom, a brightly lit artist explained the traditional skill that was a mainstay to the industry 20 years ago. Some of these freshly minted students spent the time drawing the speaker and taking notes as they demonstrated the ‘paper flip’ and whipped through a short scene in 30 minutes while speaking nostalgically of the social aspect of working with dozens of artists to complete a project in an analog world. Drawing workshop in session at the 2014 CTN eXpo.

Some of the crowd, between speakers, would then move in toward the drawing benches, eschewing the digital workstations, and sit down to test their drawing skills on paper. It was heartening to see that the old masters were having an influence on the new generation. Buzz words like “personality,” “humor,” “love,” “keeping the line” and “flow” were common among the character designers and scene animators of old, while “ease,” “speed” and, unfortunately, “see, like this, um, just a second, my mouse is hosed up,” prevailed on the digital side.

Besides the demonstration booths and workshops, there were a number of vendors with hand-drawn prints, and a few had light boxes and were drawing characters and scenes throughout the event. The number of schools that were present looking for students seemed to be split down the middle between teaching fine art and digital artist’s tools. With few offering a rounded education in both aspects, more of the degree offerings had both while the accreditation schools only offer education in software.

Perhaps the outlook for the industry is one that meshes the two schools of thought, one that takes aspects of traditional skills and uses modern tools for enhancement rather than replacement. The fear that traditional skills and tenants are disappearing with the older generation of animators is averted as the new generation finds worth in development of their stories through utilizing both the old and the new.

While the digital age has led to films that show the potential for doing things that never could have been accomplished with traditional tools, the ones that capture our attention seem to be the ones that keep some of the old craft while embracing the new, creating a modern hybrid that captures the audience with traditional character building skills and keeps it by dazzling them with new innovations. Trained in stop-motion animation and the studio arts, Beth Antley is a proponent of retaining traditional technique in animation and filmmaking while embracing new technologies.

Taking an Old-School VFX Approach in ‘All Quiet on the Western Front’
‘Natural Habitat Shorts’: Like ‘Ranger Rick,’ But for Adults
Framestore Sets Sail on ‘1899’ with New Virtual Production Tools
Animated Characters: The Art of Babbitt – Part 1
Bruce Smith and Ralph Farquhar Talk ‘The Proud Family: Louder and Prouder’ Season 2
VFX is the ‘Thing’ for Tom Turnbull on Tim Burton’s ‘Wednesday’
We Need to Chat
F is for Flake: The (Not So) Great Animation Robbery?
END_OF_DOCUMENT_TOKEN_TO_BE_REPLACED