Catching up with Janet Perlman

What’s new in the world of indie animators? I tracked down heavy hitter Janet Perlman at the Ottawa festival last fall and we continued by email this past week... Janet Perlman is an independent animator whose work delights in the satirical and the humorous absurd. Her best known films are The Tender Tale of Cinderella Penguin, Why Me, My Favorite Things That I Love and Sorry Film Not Ready. Over a career which spans decades, she has directed animation segments for the TV series Sesame Street, contributed to group films such as Anijam and Pink Komkommer produced by Marv Newland, and created the special Penguins Behind Bars, a parody of 1950s women's prison movies. She created the National Film Board of Canada's ShowPeace series, which explores conflict resolution and for which Perlman animated Dinner For Two and Bully Dance. Her work has been honoured with an Oscar nomination in the category of Best Animated Short, an Emmy Award, and many festival grand prizes at film festivals around the world. Perlman has taught animation at Harvard, Rhode Island School of Design, and Concordia University, and is the author and illustrator of four children's books.

Ambling Around: What’s Janet Perlman up to these days? I’m sure you’ve got a million things on the go.

Janet Perlman: Yes, I'm doing a few different kinds of things. One is developing an idea for the French Animation Studio at the National Film Board based on a much beloved Kate and Anna McGarrigle song called “Complainte pour Sainte-Catherine”.  It would translate as “Lament for Saint Catherine”. The whole film takes place in the underground city of Montreal, under St. Catherine street.

Ambling Around: Under the street?

Janet Perlman: I'm drawing a lot on when I used to take the Metro. It’s actually a Metro voyage from one place to another, and all the things that happen along the way. I come to an animation festival like the Ottawa and I get very inspired. I'm watching films and I suddenly think of something that would be very good for my film. I've always got my little sketch book with me, and my notepad.

Ambling Around: Can we see something from the sketchbook?

Janet Perlman:  I have something much more fun. I’ve been drawing a series of cartoon stories about the history of the NFB cafeteria. After 60 years, the NFB is moving from its suburban location between two car dealerships to the heart of downtown Montreal (near St. Catherine street). I wanted to commemorate the cafeteria, where a lot of creativity took place. Unfortunately there will not be a cafeteria in the new building. Here is one my  favourite animation-related stories. Ambling Around:  These are fabulous and a great reminiscence of the NFB. I hope there are many more.

Janet Perlman: Another thing I’ve been doing is animating other people's films. It started with I Like Girls by Diane Obomsawin. I coloured it in and did some additional animation. We both felt I could bring something to it.

Then I animated Sweet Childhood. It is part of a series of shorts called Comic Strip Chronicles  being done as a co-production between the NFB and the French company, Sacrebleu. Each one is directed by a different graphic novelist. This one is by Zviane. She does wonderful work.

And now I'm working on another co-production between the NFB and the French Studio, Like a River directed by Sandra Desmazières. It's in a highly rendered drawing style, totally different from my own. But I like working on something so completely different. The animation is slow and smooth, with lots of very detailed soft pencil shading. The characters have sandals, the sandals have straps. The feet have five toes and the toes have toenails ... But the results are stunning.

Animating other people's work, I love it. If it's a good project and I feel I have something to add, it's really rewarding.

I also have a few other things going on. I just finished the poster for the upcoming Anima Mundi Animation festival in Brazil. I will also be doing the signal film. And I will soon be animating a one-minute piece for Joan Gratz who is putting together a “jam” film with contributions from different animators. My idea is simple: The Story of My Life.

Ambling Around: The story of your life is anything but simple! I’m looking forward to seeing that. In addition to all this, I hear you’re working on a new indie short featuring a groundbreaking animation technique.

Janet Perlman: Yes, the technique is called EX-TEND-O-MA-TION. It’s similar to my film Let's Play Like It's 1949. I’m working with archival films that are in the public domain. The film is about a bunch of films that live in the same apartment building.

Ambling Around: Can we see pictures? I’m intrigued. 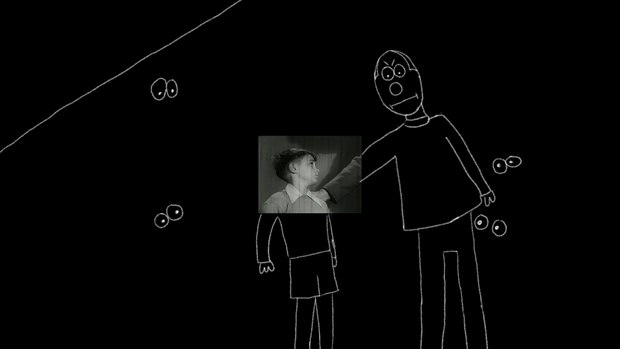 Ambling Around: Do you have more you can show us? Can you tell us a bit about the process?

Janet Perlman:  Not yet. It's a fairly simple process with a lot of possibilities for satirical storytelling which I love, so I don't want to say too much about it yet. Once the new film out, I'll be happy to describe it.

Ambling Around:  I know you're running off to a screening so thanks very much for this Janet, I really enjoyed catching up with you. I’m putting together a list of animators' favourite animation related books. Share your list with us? ….

Janet Perlman:  I still use the old Preston Blair books Cartoon Animation and Film Cartoons. You have to look past the cheesy characters. The principles of character animation are there, and I often refer to the examples of walk cycles.

I grew up on Warner Bros. cartoons and Disney. They are not what made me go into animation. I never aspired to work in these styles but I love watching them and something probably rubbed off on me. And I like reading about them too.

The Illusion of Life by Frank Thomas and Ollie Johnston, two of Disney’s original animators tell the inside story of the development of Disney animation and the Disney style. Needless to say, lavishly illustrated.

I like Chris Robinson’s books - there is information you can’t find anywhere else. He champions the under-appreciated. He has a unique take on things. I particularly like these:  Between Genius and Literacy, Canadian Animation, and The Animation Pimp.

A great book that just came out is 100 Ans de cinema d’animation by Olivier Cotte (in French) in which animators were asked to describe their work process. He covers an enormous number of techniques. It is fascinating, and I am in it too.

Two animation related books are 99 ways to tell a Story is a very simple story is told in multiple ways in strip comic form.

Understanding Comics by Scott McLeod is the seminal work on how ideas are conveyed through different drawing and presentation styles.

Ambling Around: I know we don't have time right now to discuss these in depth, but a quick three to five of your favourite animated films?

Janet Perlman:  The Big Snit by Richard Condie, The Street by Caroline Leaf, World of Tomorrow by Don Hertzfeldt, Mt. Head by Koji Yamamura, When the Day Breaks by Wendy Tilby and Amanda Forbis

And there are many more that I like just as much!

The Massive Creative Fellowship Behind ‘The Lord of the Rings: The Rings of Power’
‘The Dragon Prince’ Director Villads Spangsberg Talks Toonlines and Tough Challenges
Laurence Fishburne and Steve Loter Talk ‘Marvel’s Moon Girl and Devil Dinosaur’
Taking an Old-School VFX Approach in ‘All Quiet on the Western Front’
‘Natural Habitat Shorts’: Like ‘Ranger Rick,’ But for Adults
Framestore Sets Sail on ‘1899’ with New Virtual Production Tools
VFX is the ‘Thing’ for Tom Turnbull on Tim Burton’s ‘Wednesday’
We Need to Chat
END_OF_DOCUMENT_TOKEN_TO_BE_REPLACED