You still have time to submit your animation or animated series for the 14th IAFF ANIMATOR. 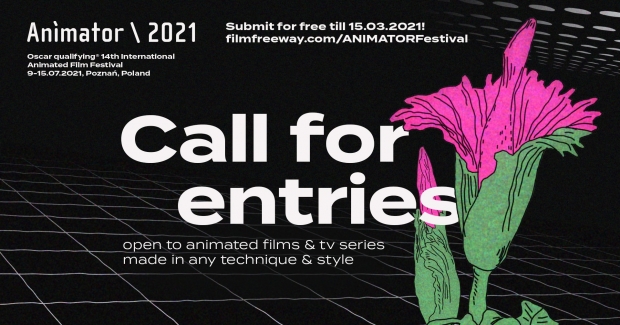 Hello Animators! Quick reminder - you still have time to submit your animation or animated series for the 14th IAFF ANIMATOR.

We are looking forward to your competition entries:

and for the first time ever :

Please submit your entries until 15 March 2021 and apply by FilmFreeway. Submission is free!

Animator is exceptionally open-minded: it readily responds to new phenomena, captures new trends and appreciates artistic experiments. Each year the festival attracts over ten thousand viewers. The screenings of competition films are particularly popular. The audience vote for their favourite features and shorts.

The Poznań Festival is one of the three festivals in Poland (and the only animated film festival) to receive Oscar® qualifying status from the American Film Academy. This means that a short film that wins the Festival's Grand Prix, the Golden Pegasus, is on a fast track to being considered for an Oscar® nomination in the Best Animated Short Film category and can compete for this prestigious award.

That's yet another reason to be here!

More details and full terms and conditions for submitting films and series to the ANIMATOR festival are available at animator-festival.com and filmfreeway.com/ANIMATOR Festival.