by Harold Whitaker and John Halas, updated by Tom Sito 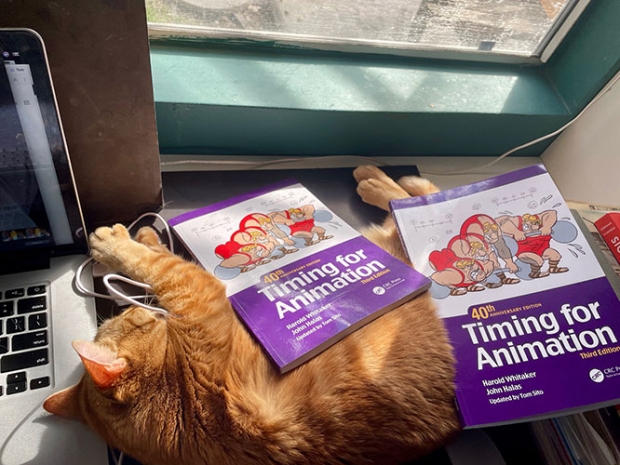 Published by CRC Press, ordering through this site: https://www.routledge.com/Timing-for-Animation-40th-Anniversary-Edition/...

The original edition of Timing for Animation by Harold Whitaker and John Halas has remained a classic tool for every animator since it was first published in 1981. The principles that it illustrates are still as relevant today as they were when it was first published. For the 40th-anniversary edition animator, educator, and animation historian Tom Sito has brought the book up to date with the edition of timing for digital works along with new illustrations to demonstrate the digital principles

Tom has left much of the original work intact while incorporating his own insights and experience into timing for digital animation and games. The 184-page book breaks down the general principles of timing into six different sections that thoroughly cover timing for broadcast media, movement and caricature, timing for oscillating movement, repeat movement of inanimate objects, and timing for lip sync. Each of these headings covers a myriad of situations to lead you through the key techniques like stretch and squash, animated cycles, overlapping, anticipation, and more. Tom’s additions blend in smoothly and do not alter the original focus of the book.

The tried and true techniques in Timing for Animation explore the fundamentals of timing, physics, and animation with detailed illustrations and clear directions to give your film maximum dramatic effect.

The original authors, John Halas and Harold Whitaker, along with Tom Sito, are familiar names in the world of animation. Halas, known as “the Father of British Animation, was co-founder of the legendary Halas and Batchelor Animation Studio. He produced over 2,000 animated films, including the legendary Animal Farm and Automania 2000 which was the first British short animation nominated for an Oscar in 1964. John was also one of the first people to write serious instructional books on creating animation. He was also one of the founders of ASIFA and chairman of the British Federation of Film Societies.

Harold Whitaker created the vast majority of the drawings for the first and second editions of the book and his drawings are also found throughout this new edition. He worked at Halas and Batchelor for many years on such films as Animal farm, the first feature film made in Britain, where he was responsible for drawing Farmer Jones. Harold was also a recognized lecturer.

Tom Sito is Professor of Animation at the University of Southern California’s Cinematic Arts Department and has written numerous books and articles on animation. His screen credits include Who Framed Roger Rabbit? (1988), The Little Mermaid (1989), and The Lion King (1998) to name but a few. In 1998, Tom was named by Animation Magazine as one of the 100 Most Important People in Animation.

A special bonus in this edition is a forward by renowned animator Joanna Quinn, who has just completed her latest Beryl film Affairs of the Art. In the forward Joanna reveals that she came across Timing for Animation while a student and still uses the principles she learned from the book.

Timing for Animation 3rd edition is a must-have book for anyone who is serious about creating animation.

Dude! - ‘Rise of the Teenage Mutant Ninja Turtles: The Movie’ Arrives
‘Super Giant Robot Brothers’: A Milestone in Virtual Animation Production
‘Luck’ Aims to Bring Hope to Kids In and Out of Foster Care
Pre, Tech, and Post: The Many ‘Vizings’ of ‘Chip ‘n Dale: Rescue Rangers’
Hammering Out the VFX in ‘Thor: Love and Thunder’
‘DC League of Super-Pets’: A Family Film Produced by a Family
‘Light & Magic’: ILM’s Story of Family, Fun, and Pioneering Visual Effects
Eric Goldberg and Mark Henn Talk the Magic of Hand-Drawn Animation
END_OF_DOCUMENT_TOKEN_TO_BE_REPLACED