Book Review: ON ANIMATION. THE DIRECTOR’S PERSPECTIVE Volumes 1 and 2 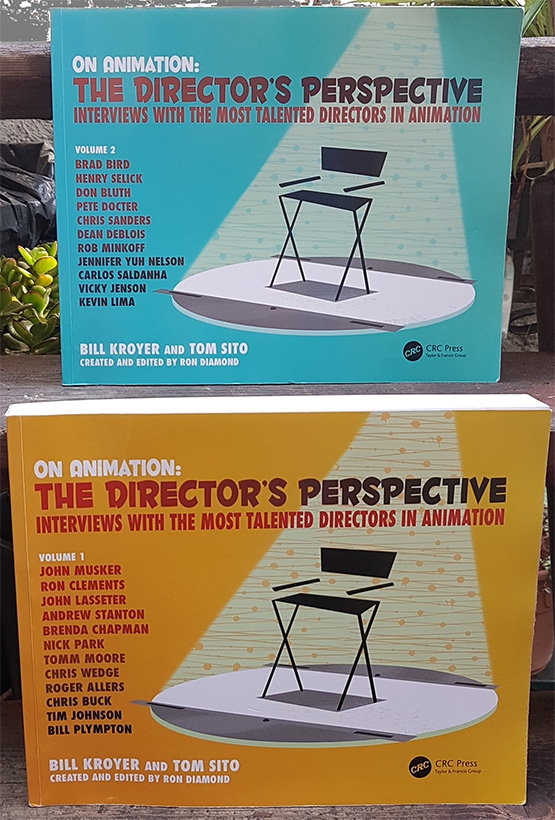 Created and Edited by Ron Diamond

Have you ever wondered how the minds of some of the greatest feature-length animation directors work?  How and when did they discover animation?  What have they learned along the way that has led to their success?   These any many more questions are answered by the people who know the answers, the directors themselves.  On Animation:  The Director’s Perspective features face to face in-depth interviews by Bill Kroyer and Tom Sito with such prominent directors as Nick Park, Pete Doctor, Brad Bird and Brenda Chapman.

Inspired by Peter Bogdanovich’s interview with Orson Wells and FrancoisTruffaut’s with Alfred Hitchcock, Kroyer and  Sito are well respected animators themselves so they know just what questions to ask and how to give the reader insights into each directors personality as well as their work.

Pete Doctor not only tells us how he ended up at Pixar but he also reveals that he was doing flipbooks in the corner of his math book in second grade.  He also gives us insights as to how he works with composers and how to direct actors. One of my favorite interviews is with Nick Park.  In talking about the beauty of clay animation and why he loves working with it, he says that “The animator is actually in touch, physically with the character on every frame”.  Nick also reveals the characters Wallace and Gromit were actually developed in one day, and that Gromit originally had a mouth and why this beloved character showed up onscreen without it. The majority of the interviews were conducted in late 2016 and early 2017.  A lot has happened in the animation industry since then but what these 23 animation directors have to teach us is still relevant.  From the King of Indy Animation Bill Plympton to people who have spent their entire careers at Disney and Pixar, both volumes of On Animation: The Director’s Perspective, cover all phases and styles of animation with interviews averaging 25 pages each.  Both volumes, 703 pages altogether, are lavishly illustrated with examples of storyboards and artwork from projects the directors have worked on.  There are also numerous personal photos of them from all stages of their careers. Both books are quite readable, so even if you do not work in animation but are curious about how some of your favorite films came about, these are the books for you.  If you are an animator or aspire to be one, these books are an invaluable treasure trove of knowledge from experts, some of whom started work at Disney when the last of Disney’s nine old men were still at their drawing boards there.

When I finished reading the interview with Henry Selick, I rewatched Coraline with an entirely different eye and discovered things that I had not noticed before.  I am sure every reader will want to give their favorite animated films another look after reading this book.