Behind the Scenes on Mark Romanek's JAY-Z “The Story Of O.J.” 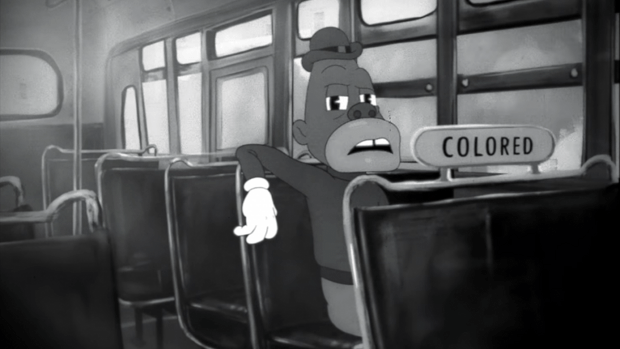 Few projects have resonated with Stash readers like Mark Romanek’s video for JAY-Z’s “The Story Of O.J.” so we’re pleased to present the first look at the process behind the phenom: a Q&A with CD Lisha Tan and AD Tim Devlin at The Mill.

What was the project brief?
TD: The project definitely evolved. It all starts with JAY-Z’s new track, ‘The Story of OJ’. He and Mark [Romanek, Director] brainstormed an idea for this film where the track would play over visuals derived from old, racist cartoons from the 1930s-40s.

It was a very powerful concept to them. Mark came to us a couple days after meeting with JAY-Z and we began developing a way to use the conventions of that style of animation to portray these terrible stereotypes, delivering a message through JAY-Z’s voice. What were the main creative challenges of the project?
TD: We knew it would be a challenge replicating these incredibly controversial cartoons from the past in an authentic way – authenticity being the key – within such a short time frame. While the old animated shorts we referenced would take around 9 months to create, we had six weeks from the initial call to delivery.

LT: Because of the accelerated timeframe, we had to rethink the traditional design process. It ran almost like a Flame session; our team would work with Mark in the suite in real-time and we’d make revisions on the go. TD: Making storyline and character choices proved difficult from a conceptual standpoint too. The 1930s-40s cartoons feature very rubbery, happy characters, but this piece speaks to serious subject matter. A lot of implications rested on every decision, especially as we were sticking to the specific aesthetic.

That’s why, in the end, we ended up breaking away from a some of the animation language of the time. For example, the main character whom we follow throughout the song, carries himself in a more modern, laid-back manner than you might see back in the day.

LT: It’s as if our lead is looking back in time and commenting on those issues in retrospect. What were the main technical challenges of the project?
TD: We used a mixture of animation techniques involving a lot of people, so when it came to execution, communication between everyone on the team was key. We used a combination of hand-painted backgrounds and CG backgrounds rendered as 2D, cel animations, along with other CG assets.

LT: It was kind of cool! It was a mixed media project: CG, hand-painted environments, cel animation.  With all of the hand-drawn character animation involved, it would’ve been impossible for us to complete the project in time on our own.

We ended up creating all of the characters here at The Mill, along with a design bible for every character, and then sent it all to Titmouse who animated each character based on the standards provided. Our partnership was essential to finishing the project. Are there any other details you would like to share?
LT: Even given the challenges, we had faith in the talent of the teams involved. In the end, we knew, it’s simply going to happen. We were going to finish it, and it was going to perfectly represent JAY-Z’s vision.

‘Baymax!’ Provides an Rx for Humor and Compassion
How Digital Domain Brought Photoreal Characters to Life in ‘The Quarry’
SCAD GamingFest: Building Shared Story Experiences with Diverse Character Design
Mission Critical: ‘Lightyear’s Journey to Infinity and Beyond
Putting the Fun in Dysfunction: The Non-Humanistic Therapy of ‘HouseBroken’
‘The Freak Brothers’: This is Your Humor on Drugs
The Heroic Logistics of ‘Superman & Lois’ VFX
END_OF_DOCUMENT_TOKEN_TO_BE_REPLACED