Another Bright Star in the World of Animation Shines in the Heavens: Eduard Nazarov 1941-2016

On September 11, 2016 the world lost a renowned animator with the passing of Russian director Eduard Vasilevich Nazarov in Moscow at the age of 75. 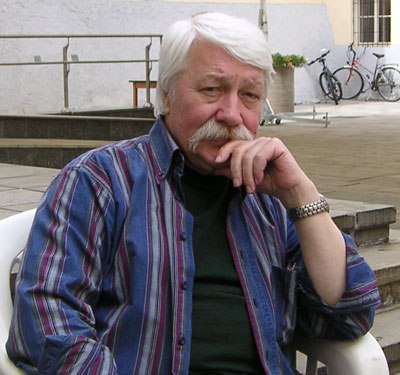 On 11 September 2016 the world lost a renowned animator with the passing of Eduard Vasilevich Nazarov in Moscow at the age of 75.

As well as his animating excellence, Eduard was well known for the numerous students he has mentored and a beloved friend to all of us who knew him throughout the world.

He is best known for his 1982 classic Once Upon A Time There Lived A dog which won a Special Jury Award at Annecy that year.  The story of a dog and a wolf, based on a Ukrainian folk tale, is a touchingly humorous saga of a dog and a wolf who are sworn enemies by tradition but as they head into old age, facing retirement from their social role they become companions in misfortune.  The film is a perfect example of Eduard’s dry wit and sardonic humor.

His career began in 1959 at Soyuzmultfilm as an artist-renderer and animator.  He went on to become an art director at the studio, where in 1962 he designed the iconic Winnie the Pooh (Vinni Pukh) along with Vladimir Zuykov for director Fyodor Khitruk’s classic Russian animated trilogy based on A. A. Milne’s beloved characters.

Eduard made his directorial debut in 1973 with The Balance of Fear a two minute parable of pacifist pathos.  This film was followed by a series of short films for the children’s television series Merry­-Go-Round.  The long running program was one of the most popular television shows for Russian children.

Travels of an Ant (1983) and About Sidorov Vova (1985) were two of his last films.  His final film, Martynko (1987) was based on the writings of Soviet author and folklorist Boris Shergin, but his career did not end there.  Eduard continued to be a designer and artistic supervisor on numerous animated films.  He also became very well known as a voiceover actor. In 1993 he co-founded the SHAR school and studio with three other important Russian animators:  Fyodor Khitruk, Andrei Khrzhanovsky, and Yuri Norstein.  SHAR focuses on production of children’s films as well as auteur and debut films.  Even after his recent illness his devotion to his students continued.  Although he worked at home after undergoing surgery and losing a leg to diabetes he continued to advise and critique his students via Skype.

Eduard succeeded Fyodor Khitruk as an ASIFA Vice President in 1989.  In 2012 he was awarded a People’s Artist of Russia medal which is the highest honor the Russian Federation bestows for outstanding achievements in the arts. Anyone who has ever attended the KROK International Animated Film Festival will certainly have vivid memories of Eduard.  He was co-president of the festival with his two close friends and colleagues David Cherkasky and Yuri Norstein.  Whether he was toasting you with vodka, judging the carnival contest, or commenting on a film his wit, warmth, and dry sardonic sense of humor shined through.  He was particularly delighted that he had taught his beloved dachshund Charlie to leap into the air and destroy balloons.  After Charlie finished his “performance” Eduard would pass his captain’s hat around and say that he was collecting money for Charlie’s college education. Kine Aune, Norwegian animator and longtime friend of Edik (Eduard’s nickname) put into words what so many of us at the festival felt this year when she wrote to me about her deep feeling of loss at Eduard’s passing. “KROK is a festival where we are together with friends: films, smiles, and fun!  But this festival had tears also, lots of tears.  Something important and irreplaceable had disappeared.  We will have Eduard in our hearts forever and his films.  It is difficult to accept that he is dead.”

On 14 September a farewell tribute to Eduard was held at the Central Cinema House in Moscow.  There was also an evening devoted to celebrating his life on the KROK boat this year.  Foreign friends were provided a translator since the reminiscences were told in Russian.  French born animator Monique Van Dijk-Renault who now lives in Amsterdam spoke on behalf of all of the foreign guests.  Later she told me “Eduard . . . Edik . . . Someone important, irreplaceable, has left us.  But he stays in our hearts forever with his friendship, his humor, his films.  I cherish all the moments we spent together laughing, drinking . . .working . . . I share my sadness and tears with his many friends all over the world, and with my dear Tanya, his beloved wife.”

A member of the KROK staff said “Eduard will always be our President” which sums up how we all feel.

He is survived by his wife Tanya and his dachshund Charlie.

‘Young Justice: Phantoms’ Fashions New Take on Adolescent Heroes
Three Acclaimed NFB Animated Shorts to Put on Your Radar
How Your Animation Studio’s Review Process Could be More Efficient
‘Namoo’: An Artist Reflects on Life, Death, and Everything In-between
‘Jurassic World: Camp Cretaceous’ Balances Heavy with Heart in Season 4
Look Inside Development on Riot Games’ ‘Teamfight Tactics: Gizmos and Gadgets’ Trailer
‘F’ is for ‘Family,’ ‘Forgiving’ and ‘Effing Funny’
A Lonely Otter Finds Unusual Companionship in ‘I am a Pebble’
END_OF_DOCUMENT_TOKEN_TO_BE_REPLACED