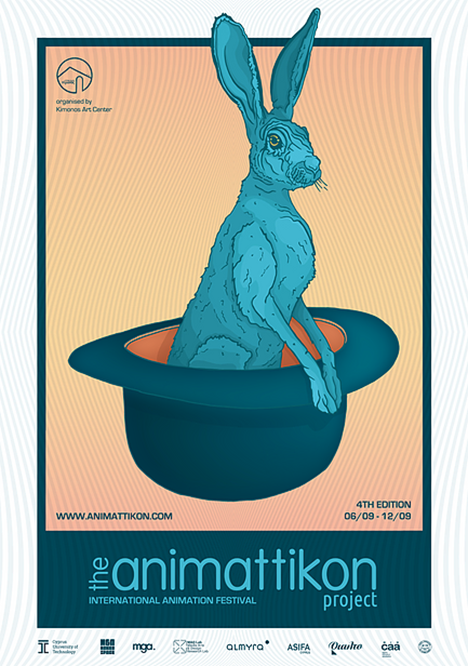 The Animattikon Project began in 2017 as part of the European Capital of Culture PAPHOS2017, the year that the historical city of Paphos, was saluted by the European Union as a city of culture. Festival director Charalambos Margaritis and his Kimonos Art Center have turned it into an annual event. Normally the festival is held at The Attikan, one of the first cinemas in Paphos.  It opened in 1938 and closed at the beginning of the 2000s. In 2017, after being abandoned for many years, the building was renovated and transformed into a multi-use cultural space. The festival takes its name from this historic building. Unfortunately, this year due to Covid, The Attikan was still closed and the festival moved to the open-air garden at Kimonos Art Center.

The Center is the studio of several professional artists and also hosts a complete educational program with classes for children and adults in a wide range of disciplines from painting and printmaking to animation. The Center has also established a residency program open to artists in all mediums from throughout the world.

The festival competition programs were very strong.  A family that steals dogs left a deep impression on me. American animator John C. Kelley recounts his return to his native Arkansas for a relative’s funeral. He says that he cut himself off from his family and had not been home in years. The discoveries that he made about his older brother, who he had idolized growing up, and his sister, cause him to question his identity. When he returns to the cemetery a few months later for his brother’s funeral John begins a slow descent into a private hell that leaves him questioning his own sanity. The film is a seven-minute exploration of grief, mental illness, and family connection using black and white drawings with splashes of color. A family that steals dogs received the Golden Hat for the Best International Short Film. The Chimney Swift by German director Fredric Schuld deals with a different sort of tragedy. The animated documentary, based upon an extremely detailed letter, explores the horrific lives, and sometimes deaths, of 19th-century chimney sweeps. Known as climbing boys, children between the ages of 4 to 14 cleaned soot and ashes from fireplace flues. There is no actual record of how many of these children died in this hazardous profession. As we watch a small child work, the poignant story is narrated by his master. Listening to the narrative we slowly realize that it is becoming more and more a personal story until it finally becomes apparent that the master is speaking about his childhood. The beautifully animated film takes its title from the flocks of birds that fly high in the sky over chimney tops, drawing a comparison between the isolation and loss of freedom of these young boys and the freedom of these birds, who often build their nests in chimneys.

Normally the festival is held at the end of October to coincide with Halloween. Due to Covid, the organizers decided to hold The Animattikon Project in early September to ensure nice weather. Even so, that didn’t stop them from giving a Best Animated Horror Film Award. This year the honor went to Iranian animator Farnoosh Abedi for his 3D puppet animation Malakout. The ten-minute epic horror film is about a crooked piano player who tries to bring his dead wife back to life with disastrous results that awaken the devil inside him. The story is indeed horrific and the puppets are Tim Burtonesque.

Gil Alkabetz is one of the cleverest and witty animators around. His stories use an economy of line combined with a bizarre sense of irony and humor. His seven-minute film Rubicon (1997) is a classic. The film is based upon a river crossing riddle that can be traced back to a medieval manuscript. There are many variations on the theme. Gil’s version involves a wolf, a sheep, and a head of cabbage and the question of how do you get all three to the other side of the river one at a time without anyone being eaten by the other. The extremely funny film becomes more surreal with each attempted crossing such as in the sixth crossing when the wolf is rowing the boat. If you have never seen Rubicon I suggest that you check it out. Gil’s latest film Good and Better was in the short film competition. It is a series of animated loops set to a song in waltz time. I haven’t had a chance to ask Gil but it felt like this was his take on Covid and lockdown. The tagline for the film is “it’s hard to think it’s gonna be good. It’s much easier to think it’s gonna be bad”. These are sentiments most of us have felt over the past year and a half at one time or another. The catchy song was written and performed by Israeli singer/songwriter Tova Gert. Along with the screenings, there were additional programs. Dr. Doros Polydorou, Assistant Professor at the Cyprus University of Technology, and his 3rd and 4th year students in the Department of Multimedia and Graphic Arts created a VR experience titled The Last Play. The project combined VR with an installation and projections. The performance room was split into two parts. The first part was full of objects that would have been found in a mid-twentieth-century writer’s home. You are invited to sit down and given a handwritten book to browse through.

Next, you enter the VR experience where you can explore the themes of time travel and the passage of time within a theatre where a last performance is being given. The theatre has been ordered to close for good due to an unfortunate accident that happened there. The experience begins in mid-20th century New Orleans and concludes in present time. The Last Play was presented at the House of Arts and Literature of Paphos. One evening before the screening, Dr. Polydorou spoke about the installation and his research work exploring narratives, artifacts, and immersive technologies in site-specific performances, installations, and exhibitions. He was also a member of the International Jury.

Olivier Catherin told the audience about animated film production. He talked about his work as a producer and showed clips from some of his films. He is well qualified in that area, having founded the production company Les Trois Ours and winning a César for the delightful short film Kiki of Montparnasse. He is currently a creative producer specializing in international co-productions, producing several short and feature-length films with French production companies. Olivier is also an animation consultant and expert for the development of animation for the accompaniment of projects for CITIA-Annecy, CEE animation, and the Republic of Georgia National Film Center. He was also on the Animttikon International Jury.

Nik and I were scheduled to give a presentation at the university on the history of animation traced through music. Although the university was still in session, due to Covid, only students and faculty were allowed on campus, so we presented it at the Kimonos Art Center before a competition screening.

Olivier’s and our program were not the only casualties of the virus at the University. French director Juliette Marchand was scheduled to give a workshop at the university which had to be canceled. It is fitting that she was on the festival Animated Documentary Jury because she began her career in documentaries before teaching at such prestigious animation schools as Gobelins. After programing animation festivals and events in Denmark, she co-founded the ATB online Chinese school, always working closely with Gobelins. Juliette and I first met when we were on different juries at the Void International Animation Festival in Copenhagen in 2020 and it was delightful to reconnect with her in Paphos.

One day Juliette, Olivier, Nik and I took a trip to Petra Tou Romiou known as Aphrodite’s Rock, the legendary birthplace of the goddess Aphrodite, (known as Venus by the Romans).  In the myth of the goddess’ birth, she emerged naked from the water around Cypress. She had just been created from the sea foam caused by Cronus castrating his father Uranus and throwing his genitals into the water. Although Aphrodite had originally begun drifting towards the Greek island of Cythera, the wind blew her towards her spiritual home near Paphos. A temple was built at PalaiPaphos (the location of Old Paphos) to worship her.

The pebble-strewn beach is very scenic and is a favorite swimming spot for local families. Close to the shore large rocks jut out from the sea. One of these rocks has been named Aphrodite Rock because of the foam that forms at its base. Local legend has it that anyone who swims around the rock will be blessed with eternal beauty. We had several delicious meals at Tavernaki Papallas (Papallas’ Little Tavern). If you are in Paphos I highly recommend a visit to Mr. Papalas for a lovely meal of traditional local dishes.

As always at the festival, there was lots of music. On opening night George Bizios on guitar and Omiros Miltiadous on drums gave an improvised performance. The closing night party was held in the garden of the Craft Bar. Proprietor Christakis Panayiotou is a gracious host at his charming, unique bar. Music was provided by Nick Azinas on guitar and Nik Phelps on soprano sax. from home. Their hospitality always makes us feel welcome in Paphos. I must thank the entire Animattikon Project team for all of their hard work and many acts of kindness during the festival. A very special thank you and well done goes to Festival Director Charalambos Margaritis for inviting us to be part of the festival and for making our trip to Paphos so memorable. I am already looking forward to next year.

You can read more about The Animattikon Project on their website:

After six days home we took off for Anima Syros in Greece, which I will write about next.