ANIMATON A WORLD HISTORY Volumes 1, 2, and 3 by Giannalberto Bendazzi

After 7 years of extensive research Giannalberto Bendazzi’s long awaited three volume set of Animation  A World History is finally here! More than just a continuation of his 1994 ground breaking Cartoons, these three volumes thoroughly cover the history of every phase of animation over the last three centuries.

After 7 years of extensive research Giannalberto Bendazzi’s long awaited three volume set of Animation  A World History is finally here. More than just a continuation of his 1994 ground breaking Cartoons, these three volumes thoroughly cover the history of every phase of animation over the last three centuries.  The 3 books are set up like an encyclopedia.  It is a valuable reference book rather than a reading-straight-through tome, arranged in chronological rather than alphabetical order.

Volume 1, Foundations – The Golden Age, traces the roots of modern animation, beginning with an earthen goblet more than 5000 years old, which he considers to be the first example depicting movement of an image and goes on to describe images showing movement on the friezes on a Greek temple dating from 447 BC and then on to the history behind Emile Cohl’s Fantasmagorie, and 20 years of silent animated films.  It also contains through accounts of animation in the United States, Europe, and the Soviet Union.  Asia, Latin America, Africa and Oceania are also thoroughly covered.  Giannalberto begins in the first volume tracing silent animation on all continents and by the third book he brings us up to date on the state of the art of animation worldwide.

The 2nd volume, The Birth of Style –the three Markets, begins in 1951 with the birth of UPA and takes us up to the era of television, the end of the Cold War, and the advent of computers.  There is also a section titled Those Masters’ Voices devoted to the amazing people who create sound effects and voice overs for animation.

The final book, Contemporary Times, deals with the globalization of animation, the expansion of television series, and the role of Japan, Korea, China, and India in the animation industry.  The rise of auteur animation and their creators worldwide are also covered in this volume. 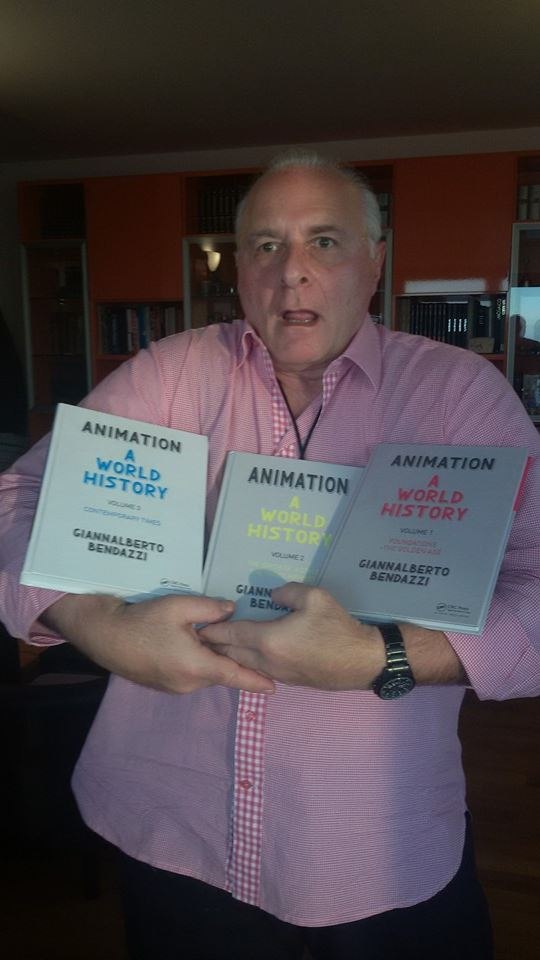 Giannalberto does not rely on his own research alone.  He utilizes other experts to write about such seldom covered topics as animation in Germany in Nazi times, Underground animation in the German Democratic Republic, and a country by county account of animation in Africa.  There are also numerous profiles of animators of animators such as Yuri Norstein, who is well recognized, as well as lesser known names such as Sagynbek Ishenov, the father of Kyrgyzstan animation.  Along with biographies of hundreds of studios and animators the author also gives us rare glimpses into their lives such as the fact that Hayao Miyazaki learned to do household chores at an early age and decades later would often cook meals for his crew at Ghibli Studio.

Whenever possible he has contacted animators by letter or e-mail to get their firsthand accounts of their work and what inspired then to turn to animation to tell stories.  In a 1972 letter from Lotte Reiniger, she not only tells details of her work process but also gives a lovely account of how at the age of 15 she was impressed by a lecture given by Paul Wegener on the possibilities of trick film which were not widely known at that time.

Giannalberto has covered animation from more than 90 countries and every major region in the world.  There are also detailed profiles of animators worldwide some of whom have never been written about in an English language book before.

I asked Giannalberto what inspired him to devote 7 years of his life researching and writing the 3 Volumes of Animation  A World History and he replied “to pay homage to animation I spent 1,500 pages of prose, but also three lines of poetry:

These books belong at the fingertips of everyone involved in animation.  They should also be on the shelves of every animation school and in every library.  I read all 3 volumes from cover to cover and although I can’t remember all of the facts that I read I know exactly where to find the information that I need thanks to the detailed index at the end of each book.

You can order all 3 volumes from the publisher at:

The retail price is $365.00 but you can receive a 20% discount from the publisher if you order on line and enter the Promo Code:  AZQ92

Free Shipping when you order online.