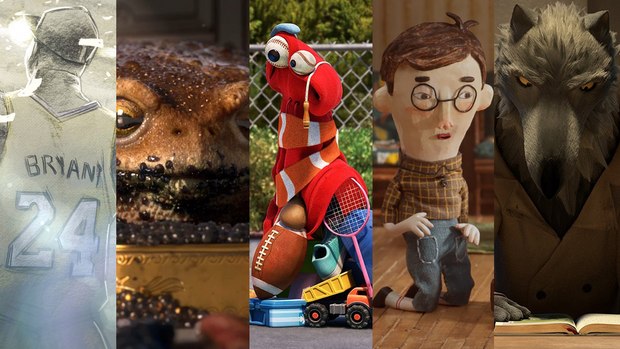 I never go to the annual Oscar short film nominee theatrical screenings. As a rule, they show all the live-action fiction and documentary shorts, not just the animated ones. Apologies to all you live-action short filmmakers out there (I mean your movies’ running times, not your height), I’m sure your films are great, but after all the “A” in awn.com stands for “animation,” not “alive.” (Plus the Academy considers anything up to 40 minutes long a short; whoever heard of a long short?)

Thankfully, ShortsTV, “the world's first and only 24/7 HD channel dedicated to short movies” was kind enough to provide an online link specifically to the animated ones; for the first time since forever I was able to watch them in their entirety, not just the two-second clip accompanying their on-air mention. I predict them below but since you’re reading this well after the telecast you’ll have to trust me I didn’t cheat if I guess right.

(I’m not going near the Animated Feature category. I’ve said it in the past and I’ll say it again: they should just rename it “The Pixar Trophy” and retire the damn thing. As challenging as Gkids’ The Breadwinner, as artistically rendered as Loving Vincent, or as entertaining as mainstream features Boss Baby or Ferdinand might be, Coco is simply Pixar’s best film in quite a while—and the Academy is extremely Disney/Pixar-friendly to begin with.)

Now, as for those shorts…Kobe Bryant had some heavyweight collaborators when he created Dear Basketball, his poignant and impressionistic retirement love letter to the game—and they don’t come much heavyweighter than director Glen Keane and composer John Williams. (I jotted down “inspirational/heroic music” while screening the film; when his name popped up in the closing credits I had to say “of course.”) Freed from decades of creating physically solid-looking characters, Keane once again employs his poetic free-flowing post-Disney style (first seen in his Google film Duet), overlapping the different decades of the man’s life as child Kobe and adult Bryant become one onscreen. Between Keane’s Disney cred and an Annie win for best animated short, this may [have been] the one to beat. (If a custom-designed end credits logo means anything, Dear Basketball may not be the only creative project to emerge from “Kobe Studios.”)

The French-made CGI-animated Garden Party starts out cute as an assortment of frogs explore a strangely abandoned and decaying mansion. But why is the music turning ominous, why are the windows riddled with bullet holes and the security cameras smashed...? The answer ultimately bobs to surface of the mansion’s unkempt swimming pool; let’s just say if movie theaters still ran kiddie matinees, kiddies would run screaming from this one. (In other words, sorry, no little golden statue for you.)

Before the movie palaces of yesteryear were replaced with giant shoebox-shaped multiplexes, a 65-cent ticket would buy admission to a double feature, a newsreel, a short or two, “coming attractions” and of course a cartoon.

Back in the day the major studios’ in-house animation departments were essentially the only competitors for that Best Animated Short Oscar. Those days of a guaranteed “cartoon before the feature” are long gone—except with Pixar where it’s still a given: Dave Mullins’ Lou, the story of a playground bully who meets his match in the form of a sentient lost-and-found box preceded Cars 3. The short showcased the studio’s mastery of visual storytelling (its sole word of dialog: “stop!”) and its fondness for sentimentality. A quite fine piece of work—but will the Academy give Pixar two Oscars in the same year? (I’m still assuming Coco has a lock on that Best Animated Feature trophy.)

The stop-motion Negative Space might be the most visually inventive of the year’s nominees. Its papier mach

-headed hero narrates the film, revealing how he bonded with his father over the art of packing a suitcase. (Interestingly, while the film is French-made, the voice-over is in English, the French subtitled.)

The protagonist occasionally turns into his child-self and even winds up momentarily packed away. After filling his own suitcase, he hits the road, driving his boxy car into a highway tunnel. The camera switches to an overhead shot of the car leaving the tunnel—except the car is now a zipper pull opening the suitcase it’s “driving” atop of. There’s a wonderful turntable transition from the boy at home to his pleased father unpacking at a hotel. (The adult narrator remembers his father calling his packing job “‘perfect’—that one word from him meant a lot.”) The film ends with a quite bittersweet punchline—although I confess I saw it coming.

It seems nowadays as if Roald Dahl is to animation as Philip K. Dick is to sci-fi movies—filmmakers can’t help but keep adapting his work. The 29-minute long Revolting Rhymes is a German/South African co-production for the BBC based on several poems from Dahl’s book of the same name. It’s a fairy tale mash-up (told in rhyme of course), conflating the stories of Snow White, Red Riding Hood and the Three Little Pigs. An older woman in a café is joined by an overcoat-wearing wolf who relates the updated, intertwined stories: Snow White’s wicked stepmother isn’t just evil, she’s EEEEvil (“I’ll have her rotten guts for dinner!”), her seven dwarfs are retired jockeys, two of the three pigs are twig and straw housing developers, the third a greedy banker—and Red is quite handy with a pistol.

Rhymes can’t resist the classic cartoon trope of Red and the Wolf aware of how their dialog is supposed to go. (“That’s wrong!” the wolf complains. “You forgot to tell me what big teeth I have.”) Befitting Dahl, the film has a macabre/morbid ending. (Let’s just say the wolf inviting himself to join the old woman wasn’t random happenstance.)

My prediction: Dear Basketball, with Revolting Rhymes a dark horse (or wolf) contender. The envelope, please… (The Miscweant goes online for a reality check…) Called it! Dear Basketball for the short, Coco for the long.

Since I’m on a roll, here’s my prediction for next year’s Best Animated Feature Oscar: Wes Anderson’s Isle of Dogs; you read it here first! (Unless I’m wrong, of course…)

‘My Dad the Bounty Hunter’: Representation Beneath the Skin
The Massive Creative Fellowship Behind ‘The Lord of the Rings: The Rings of Power’
‘The Dragon Prince’ Director Villads Spangsberg Talks Toonlines and Tough Challenges
Laurence Fishburne and Steve Loter Talk ‘Marvel’s Moon Girl and Devil Dinosaur’
Taking an Old-School VFX Approach in ‘All Quiet on the Western Front’
‘Natural Habitat Shorts’: Like ‘Ranger Rick,’ But for Adults
Framestore Sets Sail on ‘1899’ with New Virtual Production Tools
VFX is the ‘Thing’ for Tom Turnbull on Tim Burton’s ‘Wednesday’
END_OF_DOCUMENT_TOKEN_TO_BE_REPLACED