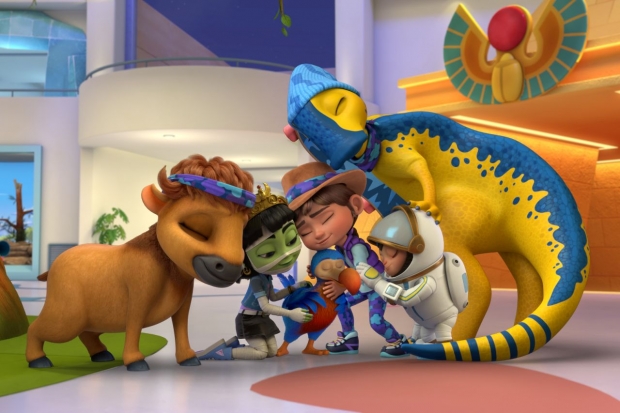 “I had really been thinking very much about, ‘What's the third to Doc McStuffins and Vampirina? How do I come out of those two shows and create another girl character who feels like she lives beside them but is also different?’” says the Peabody, Humanitas, NAACP, and Emmy Award winner. “And, more than anything, it was the idea that we have not seen a lot of girls who have gone on hero's journeys. And where we not only let the girl have the hero's journey, but we're inviting boys to watch a girl go on a hero's journey and be invested.”

Nee’s latest, the 3D animated Ridley Jones, produced by Blue’s Clues & You’s Brown Bag Films and Spirit Rangers’ Laughing Wild, premieres today, July 13, on Netflix. The show follows a young girl named Ridley who lives in a large treehouse in the middle of a natural history museum with her curator mother and grandmother. Anxious for an adventure, the curious and courageous Ridley goes exploring in the museum at night and discovers the exhibits come to life.

After learning about her family’s long-standing responsibility to care for these living exhibits -from skateboarding dinos to mummified princesses - Ridley is all-too-ready to make new friends and explore the exhibits’ portals to other parts of the world. But the young adventurer finds that there’s as much value in listening and learning as there is in diving headfirst, without fear, into a new challenge. The series has a Night at the Museum meets Carmen Sandiego feel to it and was inspired by Nee’s own family’s love for museums. “My mother was always a museum lover, and then was working towards being a docent at the Metropolitan Museum of Art in New York,” she explains. “When my son was little, she used to take him into the exhibits when they were basically closed, and nobody else was in them, and he would sit on the floor and get to be up close. And I have all these great pictures of them just sort of experiencing that. And, of course, because my brain works the way it does, I would always be like, ‘What happens if that character starts talking?’”

But when it came to designing the show’s main setting - the museum - Nee wanted something much livelier and more colorful than what traditional natural history museums are known for. After all, Ridley’s museum is filled with magic and bright, lively talking animals and artifacts, all with funky colors and just as unique personalities.

“For a Natural History Museum, immediately your brain goes to that dark, older, stuffy kind of space, but I had been to the Indianapolis Children's Museum two or three years before I came up with Ridley, and it's such an incredible space,” remembers Nee. “It has all of that old stuff you think of in museums, but it also is so progressive and bright and playful. That was the space that I kept having in my head.”

In addition to the museum, the series features many diverse, beautifully animated adventure settings, whether Ridley and her friends are exploring the plains of Africa; braving waves of electric eels; or just preventing anyone at the museum from finding out its magical secrets. But it was important to Nee that the music was as epic as the visuals. “I love music,” says Nee. “I don't think I have any projects that are not heavily trafficking in the world of music. But you look at this show and it absolutely feels feature-level, which is why we then have to get the score to feel cinematic because the world is so cinematic. And a lot of it is just having the right composers, and I've been lucky to work with so many great composers over the years.”

She adds, “I also don't do the thing, which some shows do, where they have multiple composers working separate episodes. I find composers and they are with us the whole journey of the show. And I think that changes it because they know the characters as well as we do. With Ridley’s first ‘I’m Ready’ song, I was like, ‘Well that’s a ‘Let It Go’ kind of song where you just can’t get it out of your head and want to bust out and sing it.’”

As a pioneer in the world of diversifying kids’ television, Nee also wanted Ridley Jones to be about more than entertaining and engaging. The show is designed to empower kids of all backgrounds, interests, and identities. In addition to featuring a brave and adventurous female lead, Ridley Jones is also one of the first kids’ animations to feature a non-binary character: Fred, the non-binary bison.

“It was also really important that we found the right casting for the character, so Ezra Menas, who is non-binary and plays Anybodys in Spielberg's upcoming Westside Story, voices Fred. We always made sure that Ezra felt comfortable with what we were working on. We had non-binary people in our writing staff so that we were always making sure that Fred was coming from an authentic point of view.” And Nee also had her own experiences to draw on when creating the character of Fred.

“A lot of the emotions Fred are feelings are those that I had growing up with as a gay kid in the 80s,” says Nee. “So, I knew what it felt like to feel different and have to figure out how to advocate for what felt comfortable for me, whether wearing a dress felt comfortable or not, those kinds of things.”

In the last couple years, Netflix has featured a stellar slate of animated kids shows – including City of Ghosts, Dragon Prince, and She-Ra and the Princesses of Power - that not only feature LGBTQ+ characters, but also tackle emotional and historical topics like racism, loss of culture, and the supernatural that kids’ animation of the past previously left untouched. Nee believes kids’ animation has come a long way since her career began, and that the future is bright for what content creators are entrusting to their young audiences.

“I'm excited that outlets and networks are really thinking about putting money into the younger end of kids’ programming, because I think it matters and I think the scope of storytelling has really changed,” says Nee. “For years, while I was in this business, we were in the place where we were just doing question and answer stuff and they weren't these soaring, emotional stories, and we weren't telling these complicated character stories for young kids. We'd decided that our viewers needed something much simpler. Now, I think we're meeting kids where they are, and a lot of these things we think of as complicated topics are not complicated for them.”

Nee believes the more shows try to meet kids where they are presently, the more success these shows will have. And what she’s most looking forward to with Ridley Jones’ release is getting to hear just what her target audience thinks about the show. “The show is as good as anything I've ever done,” she says. “Ridley Jones is everything I learned on Doc and Vamp, and the whole team that I worked with put this together with so much love. I can't wait to hear what kids think because that's who I'm writing for. I'm not writing for their parents. I'm writing to see if this connects with kids.”

‘My Dad the Bounty Hunter’: Representation Beneath the Skin
The Massive Creative Fellowship Behind ‘The Lord of the Rings: The Rings of Power’
‘The Dragon Prince’ Director Villads Spangsberg Talks Toonlines and Tough Challenges
Laurence Fishburne and Steve Loter Talk ‘Marvel’s Moon Girl and Devil Dinosaur’
Taking an Old-School VFX Approach in ‘All Quiet on the Western Front’
‘Natural Habitat Shorts’: Like ‘Ranger Rick,’ But for Adults
Framestore Sets Sail on ‘1899’ with New Virtual Production Tools
VFX is the ‘Thing’ for Tom Turnbull on Tim Burton’s ‘Wednesday’
END_OF_DOCUMENT_TOKEN_TO_BE_REPLACED