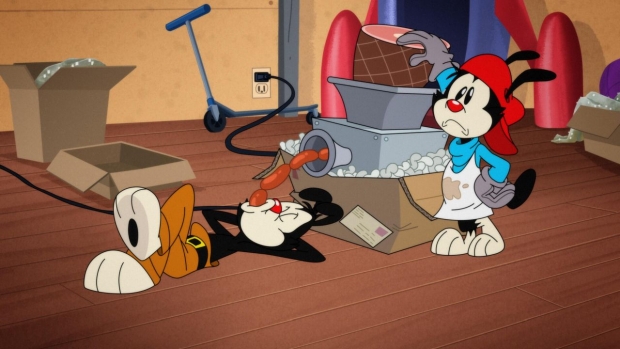 Other executive producers include President of Warner Bros. Animation Sam Register as well as Amblin Television Co-Presidents Darryl Frank and Justin Falvey. The new season’s antics range from historical quips and bits, to riffs on Netflix and outer space excursions. Season 2’s 13 episodes also feature previously rejected Animaniacs characters and, according to Swarr, are filled with even more “earworm” songs that viewers “just won't be able to get out of their heads.”

“The best part about working on this show is being able to go anywhere and do anything,” says the EP. “We're so thankful and grateful for this opportunity. And Steven has been our guiding light.”

But when first approached about rebooting the series, Swarr initially declined.

“I actually said no a couple times to doing the show because I was really worried about the fans and if we would do a good job or not,” he explains. “Animaniacs has had such a loyal following, so I was very apprehensive.” Even though Swarr says he was part of the “Ren & Stimpy camp” during the show’s original run, he was very familiar with the popularity of the series and didn’t want to do wrong by the fans. He finally got on board after realizing that rebooting Animaniacs gave him a long-awaited opportunity that he likely wouldn’t get again.

“I love variety shows,” says Swarr. “I always wanted to do a variety show like Monty Python or The Muppet Show. But it’s so hard to do that in animation and I figured this was going to be my only opportunity to ever do it. I tried to pitch a variety show a bunch of times and it was always a really hard sell because there's never a built-in audience. And this is the one time where you could do it with a built-in audience. Plus, I'm kind of smart-assy too, which is the perfect attitude for Animaniacs.”

Rebooting a series in 2020 that’s known for its unapologetic stabs at pop-culture certainly was a hefty task, and Swarr says it took a lot of research for the team to initially get their footing. “We went back and watched nearly every episode from the original series,” he shares. “There are definitely certain things that aren't as woke anymore, and we didn't want to lean into that at all. But we also wanted to make commentary on everything we could.”

From streaming subscriptions to Gladiator film quotes, Animaniacs touches not just on current topics, but older references for older viewers as well. Afterall, just like the original series, the bits aren’t just for the kids. “It is walking that fine line,” confirms Swarr. “The original show was set up to be for family viewing. It wasn’t just for kids, and it wasn't just for adults. In the beginning of the production on the reboot, we were brought in and told, ‘Okay, here's the show, and your target audience is 10 to 25.’ That’s a wide range and it’s amazing getting to put jokes in a show that go over kids’ heads, but then also keep all the slapstick for the younger audience.”

He adds, “We’re always straddling between those two features. But finding that balance not only makes the show better, but it’s also where the show needs to be.” Though most of the jokes are new - or jokes about doing worse versions of old jokes from the original series - the animation should feel extremely familiar. Swarr says that he and the team took great care in producing animation as close to the original as possible.

“We wanted to style the new series off the best of the original, and as the original show went on, the animators got better and better at drawing the characters,” Swarr reveals. “Certain studios Warner Bros. had worked with in the past really stood out to us. My favorite one was the Japanese studio called TMS, Tokyo Movie Shinsha. I had a chance to interview one of the directors from that studio who worked on the original Animaniacs and got to ask every question I could. After talking with them, it was very obvious the studio had been doing their own thing and their own take on these characters - simplifying their anatomy, changing the proportions a little bit, making them more streamlined. So that’s what we did, looking at how TMS interpreted the Warner Bros. models, and went from there.”

Leaning into the classic hand-drawn, 2D style, Swarr says their team set up the visuals to be “as exactly like the original as we could,” avoiding modern tricks like After Effects blurs.

He continues, “We're really trying to show off that original look and do it in the most traditional way possible.” But, like any good variety show, tradition hasn’t stopped Swarr and the production team from adding in a few visual surprises in the second season.

“We go to a lot more places visually in this season than in Season 1,” he says, careful not to give too much away for the sake of surprise. “This show is almost like a playground where I can just play visually with different mediums of animation and animation styles. We definitely took advantage of that in this season.”

Animaniacs was also renewed for a third season shortly after the first season released, and Swarr says it’s been a blessing as far as way the show is staffed and produced. “Season 3 is our first chance to really react to what the audience thought about the first season, because the first and second seasons were all done at the same time” he says. “Which is why we didn't want to lose our first season writers and artists. That's always what you're always up against with TV. And the DNA of the show really changes if you can't keep the same crew. You'll lose the tone. That's the hardest part. So, aside from wanting the show to continue, that was a big reason we were really excited to be picked up for more seasons so early.”

Now, Swarr and the rest of the crew have their fingers crossed that the Animaniacs’ hijinks continue with a Season 4 pick-up. “We’d really love to keep everyone on board and keep going,” says Swarr. “All the writers are amazing, and everyone just comes up with so many great ideas. And then hopefully, with the fourth season, we will have some ideas from audiences' reactions to Season 2.”