Wrapping Up Loose Ends in ‘Castlevania’s Fourth and Final Season

For Kevin Kolde and Sam and Adam Deats, tying up key storylines should help audiences better appreciate the emotion behind the show’s broken, but ultimately unstoppable vampire-hunting heroes. 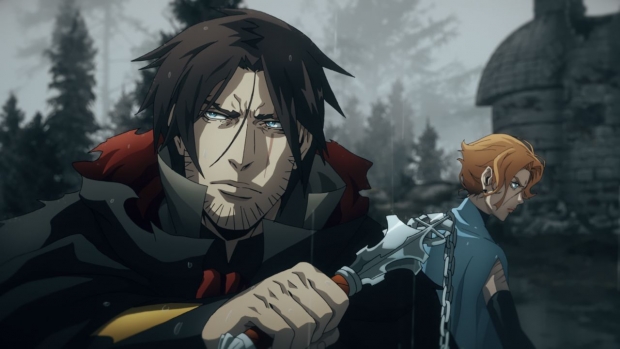 The blood-sucking, vampire-hunting, sarcastic quip-wielding series Castlevania comes to an unfortunate close with its fourth season, now streaming on Netflix. But while the last three seasons of Warren Ellis’ Dracula-driven adult animation has been doused in guts, gore, and gritty themes, Season 4 - though equally bloody and action-packed – centers more on the series’ emotional themes.

And series directors, animators, and effects designers Sam and Adam Deats say this season was by far the toughest to pull together. “When you're trying to show the effects that everything has had on these characters, and where they are, there's so much nuance that you're putting into every frame, every pose, every action, and it gets very complicated trying to bring that across,” Sam explains. “This season, more than ever, there's a whole lot of really strict, hands-on work being done to make sure that emotion and feeling in each character were handcrafted and hitting the exact marks they needed to.”

Produced by Frederator Studios, Powerhouse Animation Studios, and Project 51 Productions, Castlevania began with a mission to defeat a vengeful Dracula, eventually brought down by an outcast monster hunter named Trevor Belmont (Richard Armitage), a magic-powered Speaker named Sypha (Alejandra Reynoso), and Dracula’s half-breed vampire son Alucard (James Callis). But last season, the three seemingly unstoppable heroes suffered tremendous emotional turmoil, witnessing unspeakable acts of evil while experiencing the worst acts of betrayal while other characters were even enslaved, kept only as useful pets for the dawning of a new war.

Both Sam and Adam, directors at Powerhouse, say that as they entered the fourth and final season, this drastic shift from full-blown vampire hunting to vampire hunting with a group of broken spirits played a large role in informing their approach to the show’s already highly-detailed, hand-drawn-styled 2D animation. “There had to be a sense of foreboding that’s following the characters around for most of the season, that things are out of their control,” notes Adam. “And from a storyboarding perspective, it isn't just in the writing; you have to give hints to that sort of thing with the character expressions, acting, and even in the backgrounds of the setting.” Executive producer Kevin Kolde adds, “The hardest thing to me is not the action. It’s the quiet moments, those emotional beats that we need to see in the characters. They’re hard to do. But season after season, we have gotten better and better at conveying those acting moments in the story.”

Though the team says they’ve been “lucky to have amazing actors who also helped influence how we brought that emotion to life in the visual acting,” as quoted by Sam, they say this season also represents a culmination of the talents and lessons gained over more than four years spent working on Castlevania.

“I’ve learned so much of how to, frankly, be a better leader, to manage myself, to make bigger and better things on the post-production end, and to streamline things from so many different angles and perspectives,” says Adam.

Sam continues, “We had to learn a lot with the first season and with each season, we keep reinventing how we’re approaching things when we find this or that isn't working. And really, all the challenges we came across the first three seasons made it possible for us to make something of the scope of Season 4.”

In addition to bringing emotion to the forefront of a series that features so many eye-grabbing action sequences, navigating the sheer size and magnitude of this vampiric last chapter proved an enormous challenge.

“Honestly, it was such a big season that we fell short of being able to do it without stumbling all along the way,” Sam shares. “Really, it was a tremendous effort from a whole bunch of amazing artists who also grew and learned from experience with previous seasons. I was micromanaging the animation a lot more this season, and that meant hand-picking animators for a lot more shots rather than doling them out a little more willy nilly. And we got a lot more animators on board to help this season. So, I think that came with a certain level of added efficiency, because there were less corrections being done on the back end.” While emotion provides the backbone for the final season, there’s still plenty of slashing night creatures and bashing the skulls of undead skeletons. And Sam’s micromanagement certainly paid off, according to Kolde. “From a visual standpoint, if you look at the ninth episode of this season, you’re going to see some of the most spectacular work the team has done,” he reveals. “We lived with this for a long time, and we wanted to put everything we could into the story and onto the screen. I'm really proud of it. I think people are going to be blown away when they see some of the action. It's pretty spectacular.”

And even with more rigid animation production management, Adam says the team also made sure to foster an environment of wild creativity to help push the animation even further than last season’s memorable finale. “On the post-production side, and set piece-wise, we did not say no if the animators had a wild idea,” he says. “If they wanted to do a crazy 3D camera or something, nine times out of ten I was like, ‘You know what, let's just do it.’ And that added a sense of scope and creativity to a lot of set pieces and action scenes. It was difficult to do certain things; we have a lot of 3D shots with 2D animation sitting on top of them. But in the end, it was worth it to do something spectacular where we could.”

Along with referencing, as Adam puts it, “cosmic horror monsters” from games like Bloodborne and Dark Souls to bring new terrifying creatures to life in the Castlevania universe, Sam also got to revisit once-filed-away design ideas from days of Castlevania past.

“One of the fun things in episodes eight and nine is that some forces show up that include unused designs from previous seasons that I was sad didn't get used,” Sam says. “It was a fun opportunity to take unused designs, sometimes of prominent characters, and have them be part of these forces that show up towards the end of the season as sort of my own personal nod to the production. It was a little bit nostalgic.”

Wrapping up loose ends, both in production and story, is another theme of Castlevania’s final season, which only adds to the heightened emotion already woven throughout the end of Trevor, Sypha, and Alucard’s journey. “The characters all have endings but, actually, more than anything, they all have beginnings and that’s what the end of Season 4 is about,” explains Kolde. “The last episode focuses a lot on tying up some of these storylines, and there are moments, really emotional moments, where the audience hopefully is going to feel for all the characters, whether they survive or not. The shadow of Dracula and people trying to bring Dracula back, all those elements are finally, at least temporarily, resolved. And it feels like the survivors are in a better place.” Despite the challenge of the pandemic, Texas freeze-overs, and finishing one of their toughest and biggest projects to date, Adam, Sam, and Kevin all agree the experience working on Castlevania is not one they’ll ever forget or regret. “Even though it's been a very difficult show to work on just from the scope of it all, I'm eternally grateful for the opportunity,” says Adam.

Sam agrees, adding, “I feel like I've learned an enormous amount both as a leader and as an artist from the great people that we had the honor to work with. I still, obviously, have a ton to learn to keep doing great things that, hopefully, aren’t quite as hard as Season 4 was.”

“But we have been so fortunate in every aspect,” Kolde acknowledges. “From the writing that Warren did to the work at Powerhouse, to the behind-the-scenes stuff with Frederator Studios and music with Trevor Morris. Everyone down to the recording engineers has been with the show for four seasons and it’s like a labor of love all the way around. It's been pretty special.”

Choc Chip Animation Riffs on Pop Culture in ‘The Art of Murder’
F is for Flake: The (Not So) Great Animation Robbery?
Re-VIEW: ‘Avatar: The Way of Water’ – A Miraculous Vision
‘Kung Fu Panda: The Dragon Knight’ Celebrates a Special Lunar New Year
END_OF_DOCUMENT_TOKEN_TO_BE_REPLACED