Chad Hurd and Justin Wagner share artwork and creative insights on our favorite FXX animated misfit ensemble that has taken its incessant backbiting to the Cosmos in a new season of robots, aliens, space battles, excessive drinking and boner references. 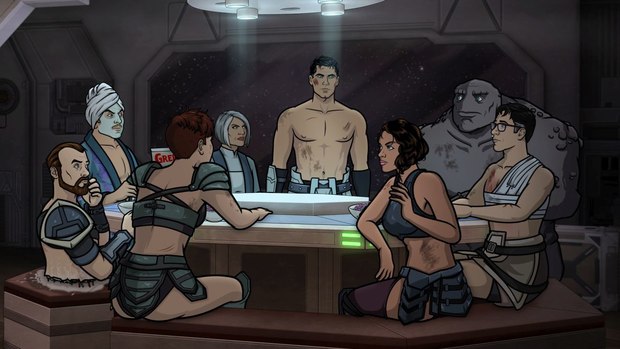 -- Check out the Archer: 1999 Gallery filled with 26 storyboards we couldn't stuff into this article! --

Set in the ambiguously dated “future” of 1999, on an interstellar salvage ship, the M/V Seamus, co-owned by the eternally bickering, now divorced Sterling Archer and Lana Kane, Archer: 1999, the 10th season of Adam Reed’s animated comedy misadventure, is here. The new season boasts of a collective dysfunction performed on a truly galactic scale. Highlighting the show’s all-new timeline and setting, Malory is now a sentient, swirling orb-like energy ball that can materialize at will to pit everyone against each other or enjoy an adult beverage. Krieger, who we thought had reached the pinnacle of creepiness, is now an even creepier cyborg – Ray, even in the confines of a spaceship, is still prone to melodrama, moisturizing masques and extreme fashion. Cheryl / Carol remains angry, bored and clueless, though is now the best fighter pilot in the galaxy. Cyril remains the embodiment of cowardice. Pam… well, Pam has continued her path of personal growth, now reaching freakish size as a gender amorphous rock monster.

The new, 8-episode season displays an even greater attention to production design and visual development than in previous years – new characters, completely new environments and a slick new array of “stuff” you’d mostly expect in a comedic sci-fi romp: spaceships, weapons, aliens and costumes. There’s even yet another version of Barry.

According to producer and art director Chad Hurd, “The new season is an all-around sci-fi space adventure that combines elements and themes of a bunch of different shows, from Star Wars to Star Trek to Aliens. Not just visually, but with jokes and references. The new season is also a bit less narrow design-wise than seasons past because we don't have to be historically accurate. It's described as what the future would look like to people in the 1970s, so sort of a 2001: A Space Odyssey, early Alien movie, with clunky technology, set in the future, or in a sense, a re-imaged year 1999.”

“Visually we've got some major changes this season,” associate art director Justin Wagner chimes in. “Pam is now a giant rock monster. She just keeps getting bigger and bigger every season. I don't think she can get any more powerful than she is now, but her personality is still very much the same old Pam. We've also got lots of different locales that we go to. We have a coliseum episode, which is really fun. They're all wearing these sexy gladiator outfits, hacking and slashing at aliens and each other. That was one of our bigger, more exciting episodes. We also go to various space ports and planets and meet all kinds of creatures. It's been kind of a wacky but really fun season to explore.” One of the show’s constants over the years has been the increasing degree of visual design complexity that accompanies each new season. Building upon the challenges and lessons learned from last year’s Danger Island setting, Archer’s production team has once again upped their game this season to meet the production’s needs for almost every element to be redesigned or newly designed from scratch.

“Last year I didn't think it could get any more difficult… and then we started this sci-fi season, and I soon realized I was quite mistaken,” Hurd admits. “It's always our goal to visually raise the bar as much as we can every year and produce an exceptional looking show, and sci-fi really opened the doors as to where we could go with our designs. Last year we had beautiful sunsets and beaches, but a sunset's a sunset and the beach is a beach. With sci-fi, we can pull from so many different aspects of the genre. We really have the chance to play with it and make some interesting creatures.”

“Our character designer, Kelton Hamm, did a great job this year, designing these different alien species, the gladiator outfits and space armor,” Wagner adds. “And our background designers, Ji Li and Shayla Hall, really did an amazing job helping us breathe new life into the look of the show. Even though we're always pulling from other sci-fi movies and TV shows, we're also putting our own Archer spin on everything, from being in deep space, to the creatures, to the different planets. I mean, every episode we're bouncing around to very different locations. There's hardly anything that we're reusing from episode to episode.” As in seasons past, episodes begin with the building of various environments in 3D – the virtual camera is pointed, a photo is mapped and used as the foundation for a beautiful, fully rendered 2D painted background image. While the production uses Harmony for certain action sequences, the bulk of the animation is still done using digital puppets animated in After Effects.

“Chris Appel and his team really knocked it out of the park this year with their 3D sets, which then get painted by our backgrounds department,” Hurd explains, “They had to build so many new things this year. And I mean, think about last year. It took place on one island in one town, and we were hanging out in the same hotel a lot of times. This season truly is... we go to a completely new environment almost every episode. There is some stuff that involves their main ship, but each time you crash land on a new planet, that's a whole new environment. You go inside somewhere, a whole new environment. So, from a production design standpoint, it's definitely a crazy season. It’s loaded with backgrounds and sets that we needed to build.”

Wagner agrees. “In previous seasons we've taken photos of things and used those as guides to draw from when needed,” he notes. “This year we had crazy creatures, like a nautilus, a dinosaur and some parasites. None of these really exist, so we had to first design them and then built them in 3D so our illustrators would have a 3D model to draw and animate from. And some of that modeling was previewed and then animated in 3D and rotoscoped in Harmony for the final animation. After Effects is still our main animation tool, but whenever there's a fist fight or someone’s being chased by a crazy creature, we'll definitely talk to our Harmony animators and try to get some exciting animation.” Visually, the new season has embraced an iconic sci-fi show design mashup style, pulling references and themes from a variety of well-known properties. “As far as the main cast themselves, it's pretty inspired by the more realistic-feeling sci-fi shows,” Wagner states. “A lot of Alien aliens, jumpsuits, that kind of dirty space trucker look. We looked at 2001: A Space Odyssey, and 2010 [The Year We Make Contact], which I thought had some really cool stuff in it too. But, as far as the locales, ships and stuff at hand, we were trying for that older sci-fi look. It didn't go as far as a cheesier 1960s Star Trek, but more of a darker, cool, dirty sci-fi. We had quite a bit of inspiration, pulling from everything and trying to put it in a blender and turn it into something new.”

Last year, it was clouds and planes. This year, it’s buttons. Lots and lots of buttons. “This season, we actually use a lot of old tools to solve new problems,” Hurd says. “Last year, there were a lot of clouds, sputtering engines and smoke from Archer's plane breaking down. This year, it's been buttons. There are buttons all over the place inside the ship: buttons blinking, turning on and off… banks of buttons. The challenge became, how to get that to happen without having to draw and animate each individual button. The joke here has been that buttons are the new trees. Last year, our background painters were sick of painting leaves and vines and trees – this year, it's a huge amount of buttons and vents and knobs everywhere. But as far as our actual technique goes, nothing has really changed on the software front. It's just our animators being creative and figuring out how to use the tools they have to do the things they need.”

For 10 seasons now, Archer has entertained audiences, first and foremost, with its savage and offbeat humor and unique blend of ham-fisted action, oddly enticing misogyny and hilariously dysfunctional interpersonal relationships. What started as a highly stylized but quite simply animated series centered around a group of bumbling, bickering, nicely dressed and often inebriated spies has become a true action-adventure romp, that according to Hurd, looks as good or better than any other adult animated show on the air. “I'm just going to say it. I think that Archer looks better than most adult animated shows. Most of those shows run on the premise that the art is unimportant… that the writing is more important. So, there's a lot of simplistic designs. You look at a lot of the backgrounds in a lot of primetime animated comedies and they're pretty plain. Then, you look at Archer. It’s written exceptionally well, but there's no way it could be accomplished without the beautiful artwork supporting it.” “I's been an exciting season, a season of growth, and a great learning experience for Justin and me,” Hurd continues. “We signed on to Archer to do dinner parties with tactile necks and classy suits. This year, we've experienced a season that is totally unlike anything we’ve ever done. Not only the main characters, but the side characters and creatures are all brand new. We've never had to do anything like that before. I used to look at a suit and say, ‘I can tell that button is in the wrong place.’ But when there's a green Jell-O monster that needs to be drawn in Archer style, what does that look like? There's no reference for that that I can lean on. We've just got to figure it out, and it's really helped expand our talents and get us thinking creatively about the design of the season.”

Wagner concurs. “I agree with Chad. I mean, I’ve been here since Season 3. He’s been here since the start. The scope of what we're doing this season is huge. It’s been a tremendous undertaking to figure out how to set these characters on the screen side by side. We lean on our staff a lot. Though we have some weird stuff going on in the scripts, we tackle everything as a team. It’s a huge challenge, but ultimately, hugely rewarding.”