At the Netflix FYSEE event, Melinda Dilger, Jennifer Flackett, Kelly Galuska, and Emily Dean discussed their hit shows – ‘Arcane,’ ‘Big Mouth,’ ‘Human Resources,’ and ‘The Very Pulse of the Machine’ from ‘Love, Death + Robots’ – and their unlikely paths to success. 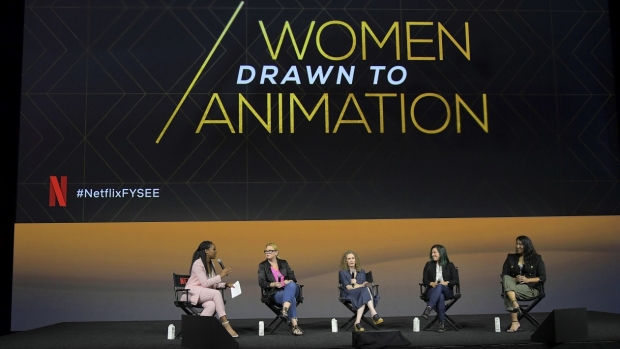 It’s been three years since Netflix’s FYC (For Your Consideration) events – known as “FYSEE” – were held in person. But from May 15 through June 12, the FYSEE space at Raleigh Studios hosted numerous Q&As, meet-and-greets, musical performances and more, all to provide audiences the chance to explore some of their favorite series – or shows they’ve never heard of – before casting their votes for the Emmys.

One of this year’s FYSEE activities was the Women Drawn to Animation panel, where Arcane executive producer Melinda Dilger, Big Mouth and Human Resources co-creator and executive producer Jennifer Flackett, Human Resources co-creator and showrunner Kelly Galuska, and Love, Death + Robots Volume 3 episode The Very Pulse of the Machine director Emily Dean came together for a panel discussion around some of Netflix's most acclaimed animated series. Topics ranged from the creatives’ favorite childhood cartoons to working with talented voice actors.

But one of the more poignant topics discussed was how all their series were ambitious in scope and could have been met with immense criticism but, instead, skyrocketed in popularity among Netflix viewers.

During the panel discussion, Dilger even admitted that she didn’t expect Arcane to be the groundbreaking series it’s become – earning multiple Annie Awards for its animated effects, character animation and design, directorial work, production design, storyboarding, writing, and voice acting.

“When I first came to interview for this job, I was like, ‘Ugh, a gaming company is trying to do an animated TV show – this is going to suck,’” remembers Dilger. “And so I went in for the interview and I didn't have my A-game on. They're like, ‘You're going to meet about five people. This is going to be a pretty intensive interview process.’ And so I sat down at Riot and they're like, ‘Have you seen anything from the show? We have a little pilot that we've done. Have you seen it?’ I was like, ‘No, I haven't seen it.’ They were like, ‘Okay, before you start your interviews, we're going to press play and see what you think, and then we'll be back.’ And I'm sitting there and I'm like, ‘Uh oh. This is actually going to be really good and I better get my A-game on.’ So no, I wasn't expecting it at all.”

Arcane’s story – derived from the famous video game League of Legends – follows character Vi as she attempts to both save her kidnapped sister, who she believes to have been brainwashed, and keep her city from falling prey to an increasingly powerful group of individuals seeking to create weapons of mass destruction.

“It was incredible,” notes Dilger about the pilot she watched prior to her interview. “And to this day, I just can't believe the honor that I've been given to work on such an amazing project. And it eventually came to be this giant hit with fans around the world. It has a new fan base. It was supposed to just be a love letter to the players. And now it's beloved by so many people that have never even heard of League of Legends. Plus all the Annies and all that stuff's kind of cool too.” Flackett recalled having a similar experience in the early days of developing Big Mouth, a show that explores often-untouched areas of puberty and sex through humorous and sometimes uncomfortable interactions with beasts called “hormone monsters.” The series now has five seasons available on Netflix and has already received three Primetime Emmy Awards.

“It's so funny because right before Big Mouth came out, my husband – because we work together, we’re partners –was lying in bed and he's like, ‘I'm worried we've made a show for nobody, because it's a show about kids for adults,’ and that's how we went to sleep that night,” the creator recalls. “And then we woke up and we realized everyone's gone through puberty. If you're watching the show, you should be going through puberty or have gone through puberty. That's what we tell people. And maybe some parents feel maybe even after puberty, they should let their kids watch, and that's fair too. But it was really this thing of, ‘Oh wow, these stories. What a potent time in life. What a potent time of when you were becoming a person,’ and how we have a lot of embarrassment and shame about those times.”

She continues, “I remember getting my period for the first time. All those things. And to be able to tap into that for everyone and to be able to have this conversation, I think that's a big part of it. That, ‘Oh wow, we all went through these things together.’ And then when you add in Nick Kroll and Maya [Rudolph] as our Hormone Monsters, they are our ids run wild.”

Big Mouth received so much acclaim that the series – which is still going strong – branched out with a spin-off: Human Resources, a workplace comedy where Big Mouth’s monsters are now assigned to a group of human adults – along with Shame Wizards, Logic Rocks, and many more–to represent their feelings. “It allows us to dig into these deep emotions that all humans have had experience with, like grief, like losing somebody,” co-creator Galuska shares. “And because this show is animated, we can both anthropomorphize grief, show how grief gets really, really huge if you ignore it. It gets to be really scary. But if you give into it, it's a comfort. It's something that you need to have as a part of your life. And it's something that we were able to visualize, which is really nice. And then juxtapose it with just some insanity, like penises boxing each other, for instance.”

In the case of Love, Death + Robots – an anthology series of animated short stories exploring… well… love, death and robots – it wasn’t only the unapologetic narrative that made the show’s future uncertain, but also its experimental animation, which serves as the backbone of the series. But, from 2D, to CG, hyper-realism to abstract cartoons, Love, Death + Robots’ animated smorgasbord has made it a multiple Primetime Emmy and Annie Awards winner.

The series gave numerous animators and storytellers a sandbox to play with. But, in Dean’s case, it was still a gamble to bring to life her hybrid 2D/3D animated short in Volume 3, The Very Pulse of the Machine, which follows an astronaut’s psychedelic journey from a crash site on the moon “IO” back to base camp.

“It was originally meant to be in Volume 2, but we need to work on the technology,” says Dean. “That’s why it’s in Volume 3. I said, ‘This is the way I want it to look. This is what I want to do,’ and Jennifer [Yuh Nelson] said, excuse my language, ‘We have no idea how the fuck we’re going to do this. But that’s what this show is here for and we’re really excited to make it with you.’” Dilger is also no stranger to new frontiers animation is embarking upon as technological advances have enabled creators to combine multiple styles and techniques in their final visuals.

“You could never marry 2D with CG,” says Dilger of previous years where animation was not as up to snuff. “Now you can marry the two. You can do all kinds of things through compositing and effects. The computer's a magical, magical thing. So we're able to take really amazing 2D work and marry it with CG, and it's just unbelievable. That's worked out really well for Arcane.”

And it’s worked out really well for Netflix, a streaming platform that’s becoming increasingly filled with more and more experimental animation and animated stories. As the popularity of shows like Big Mouth, Arcane, Human Resources and Love, Death + Robots grows, the hope is also that the view of animation’s place in serious storytelling also becomes more widely accepted and even celebrated–possibly with more and more Emmy awards. One can only hope.

Animated Characters: The Art of Babbitt – Part 1
Bruce Smith and Ralph Farquhar Talk ‘The Proud Family: Louder and Prouder’ Season 2
VFX is the ‘Thing’ for Tom Turnbull on Tim Burton’s ‘Wednesday’
We Need to Chat
Choc Chip Animation Riffs on Pop Culture in ‘The Art of Murder’
F is for Flake: The (Not So) Great Animation Robbery?
Re-VIEW: ‘Avatar: The Way of Water’ – A Miraculous Vision
‘Kung Fu Panda: The Dragon Knight’ Celebrates a Special Lunar New Year
END_OF_DOCUMENT_TOKEN_TO_BE_REPLACED