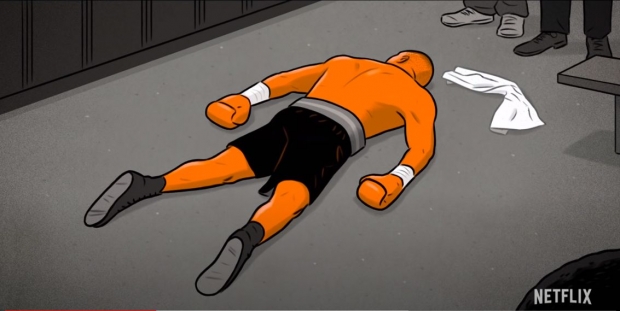 In Netflix’s Losers, visual artist and filmmaker Mickey Duzyj’s 30-minute live-action/2D animated docu-series, the director examines society’s complex relationship with failure through the eyes of a group of athletes who suffered epic, career-defining disasters. Deftly using animation in emotionally impactful archival “re-creations” that bring to life private moments that happened once the cameras stopped rolling, Duzyj showcases these athletes’ resiliency, integrity and personal growth, ultimately leading to uplifting conclusions for a group that at one time or another had been branded as “losers.” In a world fighting a deadly pandemic, Losers provides a well-needed uplifting message about humanity’s ability to rise above the “shame” so unfairly associated with failure.

Explaining his choice to integrate animated re-creations into his live-action documentary, the director notes, “I've spent my career working as an illustrator, but started directing documentaries a few years ago after developing a simple animation style. I use animation in all my films, and generally look for stories that are visual in nature but might be lacking some archival pieces to make the story whole. So many incredible stories go untold for this reason, but adding animation solves a lot of problems, mostly in recreating moments that weren’t caught on film. In our series, we also used animation to explain rules, show maps, and draw attention to specific details that added to the stories.”

Duzyj had considered using animation from his earliest days of development. “Animation was always at the center of how I conceived Losers,” he says, “I’d created a proof-of-concept in 2016 with a short film called The Shining Star of Losers Everywhere. That film told the strange-but-true story of how a Japanese racehorse rose to fame after enduring a long losing streak, and animation played a huge role in filling holes where archive didn’t exist. The main takeaways from that film were: animation is a hugely practical tool to tell tricky stories, and if used right, it can actually be more satisfying to watch than mediocre archive. I wanted to test these ideas on a series, and got my chance with Netflix.” “Prior to Losers, I’d always done the art for my films myself, so I tend to collect limited animation examples that get a lot of use from a very few number of drawings,” he continues. “The stuff I look at most are the Ward Kimball Tomorrowland Disneyland TV episodes from the 50s (like “Man in Space”) and cutscene animation from NES games from the 80s and 90s. Pulling moves from both, and other places, I cobbled together a limited style that could handle re-creations but also do more design-y things like maps and infographics. It still takes forever to do, but not years and years.”

Tasked with producing 50 minutes of animation in 10 weeks, Duzyj brought on Augenblick Studios in Brooklyn to help turn his storyboards into final art. “They hired a team of about 25 layout artists, animators, and compositors to create the final animation based on the style of my previous films, and the art was all drawn in Photoshop before being comped in After Effects,” he shares. “I oversaw their team and generally tried to keep things on the road.”

Noting the inherent challenges in producing any animation in a timely fashion, Duzyj says, “In hindsight, there just wasn’t enough time for the studio to deliver the quality and consistency we were looking for, so the most difficult part of the process was having to take the files from the studio, build a second revision team, and redraw most of what was done in the previous 10 weeks. I’m grateful Netflix allowed us to do that because we got where we wanted to go, but that was very tough for everyone involved.” Despite the difficulties, the director is pleased with the final effort, sharing that the emotional impact and “feel” of the animation is exactly what he’d hoped to achieve. “I’m very proud of how the animation came together, and not just because it earned us a Sports Emmy nomination this year,” he says. “One of the most satisfying parts of the show’s release was how smart reviewers were in discussing the animation. I assumed there would be the usual chorus of people where animation ‘isn’t their thing’ or whatever, but the response we got was overwhelmingly positive, feeling it added to the storytelling. We did what we set out to do.”

Duzyj also shares that Netflix was a fantastic partner in supporting his vision for the series, and he hopes “to see streaming services give even more opportunities to animators and directors who want to try new things combining animation with documentary filmmaking.” “I love seeing things like Midnight Gospel and Vox's Explained,” he concludes. “It really feels like the beginning of something.”