Writer/director John Vassallo and studio SVP, Creative Logan McPherson talk about their award-winning 2D animated short film, a ghostly tale of a boy who loses his dog and must face terrifying forces to get her back. 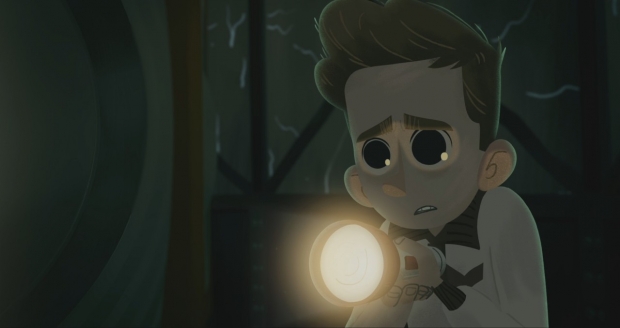 Long renowned as one of the world's leading independent kids' content companies, Halifax-based WildBrain is home to such brands as Peanuts, Teletubbies, Yo Gabba Gabba!, Inspector Gadget, Degrassi, and many others. And, with the advent of their 75,000-square-foot state-of-the-art animation studio in Vancouver, BC, they have been producing a number of popular series, including The Snoopy Show and Carmen Sandiego.

Great, you say, but what have they done lately?

Well, for the first time ever, WildBrain Studios has produced an animated short film, which has gone on to win Best Animated Short at the Toronto Short Film Festival and the Vancouver Independent Film Festival, and is currently touring the international festival circuit. Written and directed by veteran animator and digital effects artist John Vassallo, Lake Erie is a family-friendly ghost story that follows a boy who, when separated from his dog, must face terrifying supernatural forces to get her back.

The 2D animated short will also serve as the basis for an all-new WildBrain series, currently in development.

AWN is pleased to present an exclusive peek at the official Lake Erie trailer, as well as development art and stills from the short. And, as if that weren’t enough, we also spoke with Vassallo and Logan McPherson, SVP, Creative at WildBrain Studios, about the origins of the project, the impulse behind making the short, and whether this represents a new model for future productions.

Check out the tantalizing trailer – if you dare! - then enjoy the interview!

AWN: What inspired WildBrain to produce a short now?

Logan McPherson: First and foremost, it’s a great story. John has such a unique and clear vision for both the narrative and the visuals. We believe there’s a real opportunity to elevate this type of storytelling in animation, and John’s vision spans much farther beyond the short into a world and cast of characters that could be explored for many seasons.

It was also an incredible opportunity for us to support a local creator and help bring his vision to life. We felt this was a unique story with great characters, offering a family-friendly horror vibe, which is not often done. John’s artwork reflects a nostalgic, hand-drawn style, but it’s also rich with atmosphere, mood, tone and lighting. So, from a studio perspective, we saw it as an opportunity to push what we’re already doing in Harmony and integrate CG elements and lighting in a holistic way that really serves the narrative.

Finally, with John’s depth of feature film experience, it was an ideal opportunity to bring that sensibility to the studio and cross-train our crew in this style and execution, with John’s vision driving it. AWN: What was the genesis of the film? Is this something you’ve been thinking about for a while?

John Vassallo: Yes! Lake Erie started as a passion project of mine back in 2015 – I worked on it during nights and weekends, something that I was lucky my wife Melissa supported. I fell in love with the characters and just couldn’t let go of them over the years, even though I came close to giving up on it a few times. I had always wanted to make it into something bigger, and when WildBrain got involved, it started to feel like that was possible.

AWN: Can you cite any specific influences with regard to narrative and/or visual style?

JV: Narratively, Stephen King is a big influence for me (you might notice some references in the short), as well as 80s films, such as Stand by Me and E.T. We developed the long-form story with writer Josh Saltzman in tandem with the short, so it all evolved organically.

Visually, I was very inspired by Dice Tsutsumi and Robert Kondo’s The Dam Keeper. I come from a CG feature background, but I wanted Lake Erie to feel more illustrative, gritty, and of course, creepy. My goal was to make something that looked like my initial concept illustrations, which included a layer of light and shadow. Our studio’s technical director, Josh Dresner, did an amazing job of hitting the look that I was going for. AWN: How long did it take to make and what was your production pipeline like?

JV: The whole production took around nine months, with a few gaps here and there because we primarily relied on people rolling off other projects to crew up ­– which was a unique challenge for our producer Devon Cody and production manager Jenn Korba-Gill. Our pipeline integrated some 3D elements and Harmony builds supervised by Bob Etchingham, along with some traditionally 2D animated shots to create the look.

AWN: Did any of the other creative contributors have a significant influence on the final product?

JV: Our voice cast, assembled by Adrienne Lindsay, was amazing. They all gave great performances, despite being isolated in the recoding booth during Covid. Concept artists Isaac Orloff, Charles Hilton, and Jenn Jackson did some amazing work on the initial ideas that really raised the bar for the whole film, and the Character Design team of Armando Castellanos, Tor Aunet, and Alex Picar worked hard to get my initial character designs production ready.

Background Supervisor John Hill and his team created the beautiful backdrops, and our head of animation on the project, Flávia Guttler, worked her magic to get the stylized animation on point. Our lead FX artist Jeremy Rillorta helped to nail down the look of the ghost fire and stylized waves, which were a huge challenge. Ari Fremder Utria composited the entire short by themselves at a high level, which is incredible. CG technical directors Jason Julich and Stefan Bekolay headed up the 3D side of things, with 3D modeler Woong Park and head of CG layout Jeff Burt crafting the 3D elements. Our composer, Peter Ricq, supplied the awesome original music and editor Ryan Smith brought all the pieces together. The whole cast and crew really came together around this project. AWN: Who is the audience for this film and how would you characterize the storytelling?

LM: Lake Erie creatively explores the “family horror” genre, which we believe is a unique opportunity in animation today. John does this elegantly and respectfully, giving our audience an appropriate level of scare, without being distasteful or gory. (Kids won’t end up having nightmares.) At the same time, it’s not afraid to be bold and edgy, featuring lots of twists and turns. The narrative is designed to entice viewers to put the pieces together as Kip moves through his journey, not only to make sense of his present-day scenario, but to understand his past and family history as well.

AWN: Is this a model for the future and will other in-house talent be tapped to direct more short films?

LM: While we haven’t officially set up a shorts program, per se, we’re always keen to explore opportunities to bring fresh voices and unique ideas to the table, especially when we can expand our studio capabilities and develop our in-house talent at the same time.

Taking an Old-School VFX Approach in ‘All Quiet on the Western Front’
‘Natural Habitat Shorts’: Like ‘Ranger Rick,’ But for Adults
Framestore Sets Sail on ‘1899’ with New Virtual Production Tools
Animated Characters: The Art of Babbitt – Part 1
Bruce Smith and Ralph Farquhar Talk ‘The Proud Family: Louder and Prouder’ Season 2
VFX is the ‘Thing’ for Tom Turnbull on Tim Burton’s ‘Wednesday’
We Need to Chat
F is for Flake: The (Not So) Great Animation Robbery?
END_OF_DOCUMENT_TOKEN_TO_BE_REPLACED