Who Knew the Robot Apocalypse Would Be Such a Crowd Pleaser?

As Sony Pictures Animation’s ‘The Mitchells vs. the Machines’ continues its seemingly inexorable march toward the Oscars, director and co-writer Mike Rianda reflects on what it all means. 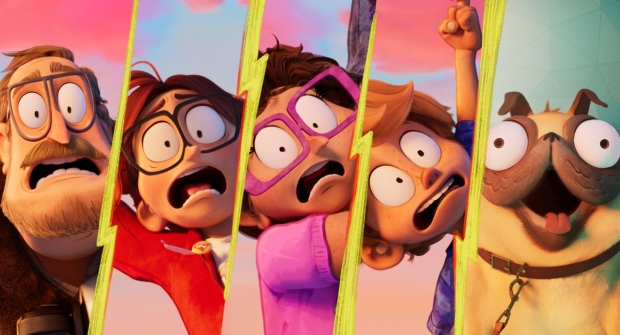 It may be hard to remember, now that Sony Pictures Animation’s The Mitchells vs. the Machines has more or less taken over the world – winning eight Annie Awards, including Best Animated Feature; receiving accolades from more than half a dozen critics’ groups as Best Animated Film; and being nominated for an Academy Award – that it wasn’t exactly an easy journey to the big (and little) screen for the apocalyptic CG animated comedy. As director and co-writer Mike Rianda remembers it, he was worried for the first two or three years because “we had gotten all these great artists excited and on board, and then it sort of stalled because it's a big investment.” The decisive moment for Rianda came when Oscar-winning producers Chris Miller and Phil Lord (Spider-Man: Into the Spider-Verse) signed on, and the film was officially greenlit: “I was like, well, now they can't cancel it. It's too expensive. We're like convicts with our hands tied together.”

Which is not to say it was smooth sailing after that. There followed a name change and multiple delays in the movie’s release date before Netflix finally began streaming it last April 30 on small screens around the world, following a limited theatrical opening. And we all know what happened after that.

The Mitchells vs. the Machines tells the story of a dysfunctional family’s fight to reconnect… and save the world from a robot apocalypse. Its fresh animation designs and offbeat, topical humor, as well as unique narrative style, have wowed audiences worldwide. Putting a new spin on dysfunctional family dynamics, the film finds both humor and emotion in portraying an out-of-touch dad’s skill at never missing an opportunity to miss an opportunity to connect with his daughter.

Now, almost a year after the film’s premiere, and with the Academy Awards only a few days away, it seemed like a great time to talk with Rianda again about his wild ride and how The Mitchells vs. the Machines became such a cultural phenomenon. AWN: Looking back, when you reflect on the production and the film’s reception, what skills do you think were most important in your work on the film? What ended up serving you best?

Mike Rianda: That's a great question. I would say it’s tenacity, more than anything else. One part of that is fighting for the right people, people whose work you love and who excite you and who you feel it would be a dream come true to work with. Sometimes the studio will suggest someone because they're available, and that person might even be great at what they do, but they're not really a good fit. You have to be insistent on getting only the people who are really right for the movie.

And then the other part is that you have to fight for your ideas. Whenever you're doing things that no one's ever done before, it's scary. The executives are well-meaning, but they're also like, well, nobody's ever done this before. Should we do it? And you just have to continually find new ways to show them that it's the right idea. Of course, you also have to be pliable enough to know when you're wrong and when to give in. But, when I look back on the movie, the reasons I feel it's successful are one, because we had an unbelievable team, and two, because we just never gave up.

AWN: Is there anything you specifically learned on this film that you’ll be bringing to your next projects?

MR: Oh sure. One is just that there are no rules. I remember when we were first storyboarding, and we had Katie drawing on the screen, we were looking at each other and asking, are they going to throw us in movie jail for this? And people thought it was great. Nobody cared. And I do think it feels like there are these preset rules for making a film, and you could just shatter all of them. That's the real thing that I took away – that animation is so boundless, and it should be our jobs as animators to just sprint towards the unknown as fast as we can. AWN: When we spoke before, you said that the biggest challenge on the film was making sure that things worked. If there's a joke, it needs to be a good joke. If there's an emotional scene, you wanted to make sure that the audience was engaged the way they're supposed to be. Do you think you were successful in meeting those challenges?

MR: I mean, I’d like to hope so. Because even though a movie gets good reviews and people on Twitter say they like it, as a filmmaker, you still have this uneasy feeling. We were lucky enough to have a couple of screenings where I saw it with an audience, and the jokes I hoped would get a laugh got this big, crazy laugh. Or I looked around during an emotional moment, and I saw people with Kleenex out. So, I think I can say that I did meet a lot of those challenges, much to my delight.

AWN: Were you surprised about people’s reactions to anything?

MR: We had hoped that by making the characters more unique and specific they would be more universal. And that has been the case to a degree that I could never have anticipated. People just love Katie. And I think they love her because of how specific she is. She draws on her pants and somebody's like, "I drew on my pants in grade school!" or they identify with the fact that she’s LGBTQ+. So, the lesson has been reinforced in a really huge way that if you represent somebody honestly, people are just so grateful, which I was not expecting.

In one way, it was easy for us to be authentic, because Katie’s a first-time filmmaker with a lot of ideas and a lot of excitement and maybe not the most skill. And every one of our team members was able to bring something to that. Also, we had a ton of LGBTQ+ team members and we were able to ask them about how to make her more authentic. And they were like, oh, she likes girls, and she also likes making movies, and it shouldn't feel like a big deal. And people really liked that, they weren't like, why isn't there more stuff about her sexuality in there? They're just like, oh, I'm really glad that it was no big deal. AWN: What did you most hope Academy voters would see when they were watching the film?

MR: The thing I would have loved them to see is how handmade it is by this team of people, and how this movie could never have been made at any other studio. Lindsay Olivares, the production designer, created this new art style, and Mike Lasker, the VFX supervisor, wrote software to make it possible. There was so much invention from so many people – like this light shader that makes objects look like they’re watercolors. And we tried to tie that into the theme of the movie, because the movie is about a dad who's looking at the past, and a daughter who's looking to the future, and they find a way to live in the present and move forward together.

And we did that with every part of the production, from the art style ­– where we tried to take the best of 2D and meld it with this insane futuristic technology that was invented yesterday – to the music, where we mixed classical music with synthesized sounds. Throughout the movie, we were trying to come up with a new language and trying to push animation forward and do things that people had never seen before. AWN: Last time we spoke, we also talked about your jump from TV to film. Are you hooked on features now? Or are you happy to work on TV as well?

MR: I've always been excited by the possibilities of animation, but this movie really lit a flame under me. Different storytelling mediums offer you different things. The amazing thing about features is that you can design each moment and plus it at every stage, over the course of months, and try to sharpen it into a diamond. And that's a really exciting way to tell a story, because you can make sure you're positive about every single decision. On the other hand, on TV, you have so many at-bats and there's so much ground to cover that it's less precious. So, you get to experiment more and try new things.

They really both have some exciting possibilities, and I'm happy to keep working in both. I love features and the amount of collaboration you get to do because there's time. In TV, sometimes you're just like, let's keep it moving, people. And that can be a strength, but it can also be a weakness. So, I think I'm most in love with movies and features, but I would totally do a TV show. Some of the best storytelling happening right now is on TV.

Animated Characters: The Art of Babbitt – Part 1
Bruce Smith and Ralph Farquhar Talk ‘The Proud Family: Louder and Prouder’ Season 2
VFX is the ‘Thing’ for Tom Turnbull on Tim Burton’s ‘Wednesday’
We Need to Chat
Choc Chip Animation Riffs on Pop Culture in ‘The Art of Murder’
F is for Flake: The (Not So) Great Animation Robbery?
Re-VIEW: ‘Avatar: The Way of Water’ – A Miraculous Vision
‘Kung Fu Panda: The Dragon Knight’ Celebrates a Special Lunar New Year
END_OF_DOCUMENT_TOKEN_TO_BE_REPLACED