The Whimsical and Grounded Dance of ‘Luck’

Director Peggy Holmes talks about the importance of family, the challenges of working with characters of wildly divergent sizes, and how her background in choreography helped her nail the physical nuances in Apple Original Films’ and Skydance Animation’s CG fantasy comedy ‘Luck,’ dropping August 5 on Apple TV+. 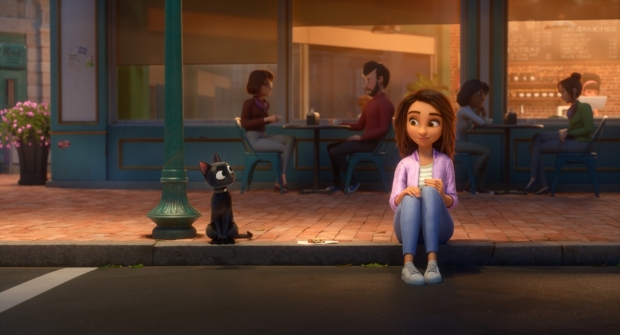 This Friday, August 5, Apple Original Films’ and Skydance Animation’s CG fantasy comedy, Luck, begins streaming on Apple TV+. While there are those who believe you make your own luck, anyone with a modicum of common sense knows that there must be a mysterious and well-oiled organization responsible for determining how good luck is distributed around the world. While perhaps no one would have guessed the Land of Luck is run by a dragon (Jane Fonda), that’s only one of the many revelations discovered by 18-year-old Sam Greenfield (Eva Noblezada) – aka the unluckiest person in the world – when she jumps down a magical portal in pursuit of Bob (Simon Pegg), a talking black cat, who she believes may know something about the lucky penny that – before she accidentally flushed it down a toilet – promised to change her life for the better.

Actually, Sam is more interested in helping her young friend Hazel (Adelynn Spoon), who, like Sam before her, is growing up in the foster care system and can use all the luck she can get to help her find a forever family. Something that eluded Sam, who has aged out of foster care and is now out on her own. Alone. Sam quickly discovers that the Land of Luck is a beautiful and extraordinary place inhabited by all manner of magical creatures; it also turns out to be a place that no person from Earth is ever supposed to see. Nonetheless, with Bob and Gerry the leprechaun (Colin O’Donoghue) at her side, Sam sets out on a bold search that takes her to every part of the magical Luck world, where she eventually learns that there’s a power even greater than luck.

Skydance Animation’s first animated feature film, produced by David Eisenmann (Toy Story 3), David Ellison (Top Gun: Maverick), Dana Goldberg (The Adam Project) and Academy Award winner John Lasseter (The Incredibles, Ratatouille, Toy Story, Finding Dory, Cars 3), Luck was directed by Peggy Holmes (Secret of the Wings, The Pirate Fairy), who came to the project late and made it her own. As she shared in a recent video interview, while she was strongly attracted by certain aspects of the original project, in the end it also turned out to be a perfect vehicle for her to exploit her background as a dancer and choreographer.

Dan Sarto: I wanted to start off by saying that we got to see the film soon after Annecy, and we just thoroughly enjoyed it. I know you took over a project that had been in production for some time, and you brought a fresh pair of eyes and a fresh perspective to it. I think your background in choreography and dance really helped. So I wanted to tell you that up front.

Peggy Holmes:  I’m so touched by hearing you say that. Honestly, I could get teary right now. DS: Also, I have a perspective that most people don’t, in that I have experience with the foster system and adoption. There are certain aspects of the story that are very spot on.

PH: We talked with young adults and had meetings with consultants at organizations to run things by them and get their approval. We asked them, “Does this feel authentic? Does this feel real?” We really leaned on our consultants to give us the thumbs up.

DS: What was it like for you coming on to the project so late in the process?

PH: Just to be clear, when I came on the movie, we created a whole new story. This was not taking the story that existed and changing it a little bit. This is an entirely new movie. That said, there were two aspects that were part of the project that appealed to me when I was asked to consider directing it. One was that the lead character was growing up in foster care. And the other thing I was drawn to was the little leprechaun.

I come from a very big family. It's the most important thing in my life. I felt that if I had a character that's in foster care, I could tell a story where she finds family. I was interested in doing that. With this little leprechaun, I was like, "What if I take this leprechaun, and I blow it out and create a whole magical world we've never seen before?" I thought it would be interesting to have this very deep, emotional core to a story that's very real, about real bad luck, and set it in this magical world.

DS: Were there any visuals or other design elements from the original project that were still usable, or were you starting over from that standpoint too?

PH: We pretty much used the existing city for the city that Sam lives in. We gave it a facelift; [production designer] Fred Warter put his design tweak on it, but parts of that city were built already. We also utilized the background characters that already existed, including the little hazmat bunnies that everyone really loves. And the dragon character played by Jane Fonda already existed – although we gave it a new costume. Other than that, we really created everything new. DS: What inspired the look of the characters and the world? It's a very elaborate world with a lot of moving parts that all fit together very nicely.

PH: I think the fact that it all fits together nicely is really all about story. If you have characters that only have good luck, you don't need things like railings. You don't ever have to wait for a people mover. Everything should just work perfectly in sync. Fred and the art department went nuts creating these crazy mechanical things. We wanted it to be a world that you've never seen before, so we just kept challenging them. "Do another one. Go further." It was super fun to do that.

DS: Yet it wasn't too frenetic, which could easily have been overwhelming.

PH: It comes down to rhythm, I think. As you know, I was a dancer and choreographer before. I've been on a stage with 30 dancers, moving in a space where it all has to work together. No one can bump into each other. So I think we applied those ideas to the world, that it all needs to work together seamlessly.

DS: Apart from making the parts work together, did your dance background help in other ways?

PH: I’m particularly moved when I see someone in a pose that creates emotion for me. I'm just in tune with that kind of physicality. And that's what I look for with the story artists, to create a physical representation of the emotion the character is feeling. I love the nuance of that. If you move your hand on a certain word of dialogue, it makes a bigger impact, or if she moves a little bit sideways and then looks over, you feel her uncomfortableness. It's those little things, I think. DS: You see that, for example, in the scenes where she's unlucky with her toast. That could easily have been a lot more cartoony, and it probably would've been funny, but it wouldn't necessarily have fit.

PH: You're touching on something that's so important, because we gave Sam some real bad luck, be we also wanted to make sure that the story stayed grounded. We wanted it to be relatable. When you look at people like Lucille Ball or Carol Burnett or Charlie Chaplin, these great physical comedy geniuses, they often did sequences that were grounded in reality. They were in the real world. Lucy's in her kitchen, and these things are happening to her. So that was our inspiration.

DS: In addition to dealing with multiple time zones and struggling to find time for meaningful communication with your team, was there anything else you would peg as a big challenge?

PH: I would say, from an animation point of view, we have this great diverse cast. You have a 40-foot dragon, you have Sam, who's 5' 4", you have Bob, a four-legged cat about three feet tall, and you have Jerry, a leprechaun who's only two feet tall. Something I did not anticipate was when you put Sam  and Bob and Jerry in the same scene, they have to walk and talk. And their walk cycles are like – what!? Sam has to go slow, Bob is medium on all fours, and Jerry has to race to keep up with them. That was something I did not foresee. The animators rose to the occasion, but it was an unexpected challenge. DS: In the film, bad luck ends up not being all that bad, and helps set everything right. Was the Land of Bad Luck ever conceived of as a worse place? How did you decide on how evil it should be?

PH: I think one of the things that we relied on is the idea that luck is random. You can't create it. You can't control it. You can't predict it. You don't know if it's good or bad luck coming. So there isn't anything sinister about bad luck, because it's completely random. Also, with Sam being the unluckiest girl in the world, we knew that we wanted to tell a story where, at some point in her life, she would look back and say, "You know what? The bad luck that I've experienced maybe wasn't all bad. And, in fact, some of the worst luck I had led me to the luckiest thing in the world – love."

So we knew from the beginning that was going to be the heart of our story. And when we thought about the bad luck creatures, we realized that they were like Sam, in that they have so much bad luck. They just figure out workarounds. They're well adapted to life because they've constantly had to overcome something. So, we knew from the beginning that we wanted to love the bad luck guys – that they would turn out to be guys you wanted to hang out with.