As a follow-up to ‘3 Teaspoons of Sugar,’ their animated short about diabetes, South Africa’s Cabblow Studios releases new film about staying safe during the pandemic, starring the filmmaker’s aunt, who lost her life in the second wave. 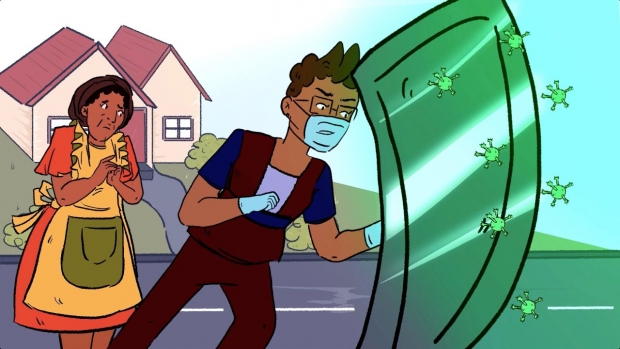 Two years after showing the realities of a diabetic’s life with their film 3 Teaspoons of Sugar, Cabblow Studios’ filmmakers Kabelo Maaka and Dr. Tshepo P. Maaka are now using their passion for medical animation to provide a guide on how to stay safe during COVID-19, with family once again at the center of the story.

“There’s an old saying that ‘Prevention is better than a cure,’” says the studios’ director of business development and producer Dr. Tshepo, also known as “Dr. T” in Cabblow’s animations. “There are some measures that you can take to avoid getting COVID-19. And those will never go away. In fact, in my house, a mask is going to be a special item from now on to prevent even the flu or any other pandemic that we come across.”

She adds, “Prevention is also cheaper than a cure. By the time you have COVID and get to the hospital, it's too costly. And death is too costly emotionally to the family.”

When It’s Risky, the Johannesburg animation studio’s latest animated short, features a familiar face - 3 Teaspoons star and Kabelo’s aunt, “The Sue” - to highlight how COVID-19 can affect high-risk individuals, like those with diabetes, and the daily precautions those individuals and their families should take. While the animation was supposed to be a story of victory story, it ended up becoming a memorial. “When we were making When It's Risky in June of 2020, [Sue] had gotten COVID symptoms and survived through it,” explains Kabelo, daughter of Dr. T and Cabblow’s creative director and lead animator. “We were so excited and were going to turn the story around and show how she had survived it. But then, towards the beginning of 2021, that's when she lost her life because we had a second wave.”

“It was a bit of a shock, but doing this story was also a happy time,” adds Dr. T, “because then I knew we were immortalizing her story. I think When It’s Risky is one of those things that will help us remember her joyfully. Yes, the ending had to change, but it forever reflects the joy that Sue had in our lives.”

The film is available through Cabblow’s website; check out the trailer:

Sue’s passing also added to Kabelo’s and Dr. T’s determination to get the film out to the public, understanding the necessity on a much deeper and more personal level. “It made the project more urgent,” says Kabelo. “We wanted to get this out as soon as possible because, at that point, we were living through the story that we were writing.” Though the mother-daughter duo says their family’s loss fueled the importance of the film's message that there are no guarantees when it comes to COVID, it was also a harsh truth to experience and then put to animation.

“It is kind of like an emotional roller coaster,” says Kabelo. “You sit, you draw, you cry a little bit, then you go back to work, or you sit, and draw, and laugh at the good times or the funny moments. But it’s a healing process as a filmmaker to write the stories of the people you know and love.”

Though she says she’s often “the strong one” in the family during these times, Dr. T, a 27-year medical practitioner with postgraduate training in anesthesiology, says When It’s Risky even pushed her as a medical expert, having to roll with the ever-changing facts related to COVID-19 and decide what to share with the public through the animation.

“It was like I was learning as I was talking,” she shares. “And then unlearning some things at the same time. What we ultimately included in the film - from a personal point of view and as a medical professional - is what made sense as far as how we know viruses and diseases behave. I’m also a holistic doctor and it was a good opportunity to talk about the toll COVID takes on you psychologically. I'm sure this story could have been longer. Initially, it was supposed to be five minutes.”

The nearly 16-minute film is primarily an open conversation between mother and daughter, like one a family might have over dinner. Dr. T says she and Kabelo were making edits right up until the end of production to stay as up-to-date as possible.

According to Kabelo, When It’s Risky grew her as an animator in more ways than one, and part of that growth was learning how to delegate tasks to other animators, many who were new to the world of medical animation and equally unfamiliar with how to visually illustrate foot ulcers, COVID swab tests, and waring viruses. “With this project, I actually let go a little bit and tried to trust our team more,” notes Kabelo. “With 3 Teaspoons of Sugar, I storyboarded the whole thing and edited it all. With this one, I had to learn how to trust.”

Being a teacher as well as an animator is a role Kabelo has had to learn, and fill, not only for When It’s Risky, but also for Cabblow Studios’ first Annual Animation Residency. The goal of this 3-month virtual program is to help aspiring animators kickstart their animation careers, providing the time, mentorship, and resources to develop their own original animated short films. The residency also includes technical workshops with software, teaching residents how to monetize their short films and offering the opportunity to work on current and upcoming projects with Cabblow Studios. “It’s been interesting, meshing these new artists into our process and guiding five more people,” Kabelo says. “But it's been a really good experience so far. We're teaching them to rely on themselves, trust their instincts, and think not only like an animator, but also like a producer.” She adds, “Every week, we always have our usual team meetings and debriefs with our core team and then the residents. Then we meet one-on-one with the residents every Tuesday and talk to them about each of their projects.”

Now in their fourth week of the program, the residents will be storyboarding their short films, which range from heartwarming stories about reconnecting with lost loved ones, to anxiety in young kids and arachnophobia. “We're getting to flex our storytelling muscles,” says Kabelo. “We're confident in our ability to tackle medical animation. But now, with the residency, we're getting to tell stories that are purely for entertainment.”

But there’s still plenty of medically-charged animations coming down the pike for Cabblow. In addition to the two films they’ve already produced, the team is also working on a sequel to their 3 Teaspoons of Sugar, called Little Teaspoon of Sugar, focusing on a young girl, excited about starting high school, who is diagnosed with diabetes. The story was inspired by a child Dr. T diagnosed last year.

Another project in development at Cabblow is Mask, Sanitizer, Zoom Call, Check, a six-episode mini-series about the COVID-19 pandemic and how it affected the lives of ordinary South Africans, from restaurant owners and domestic workers to the elderly and homeschooled. “It's a part of history,” says Kabelo. “At some point, somebody is going to need to reflect on this time. And so, we as filmmakers must tell those stories, even though we are hoping and can see that the pandemic is ending in different parts of the world. We need to show that this happened, this is how we dealt with it as a human species and learn from this experience for the future.”

Even with the mass distribution of the COVID vaccine and with mask mandates being reconsidered, Kabelo and Dr. T encourage everyone to watch When It’s Risky and enforce these precautions for other harmful viruses, such as the flu.

“I think When It’s Risky will be something in the library to go to, and to be educated about something that happened in 2020, just like I had to learn about the Spanish Flu that happened in 1919,” says Dr. T. “What people should take from this film is to educate yourself about pertinent health issues, which is much cheaper than having to then deal with the consequences of an illness. And then, lastly, do your part, so you and everyone else can stay healthy.”