What are all those paint men digging?: Lipsett Diaries

Every Monday, Chris Robinson asks an animator how they made about a particular film. This week: Theodore Ushev's discusses Lipsett Diaries (2010) 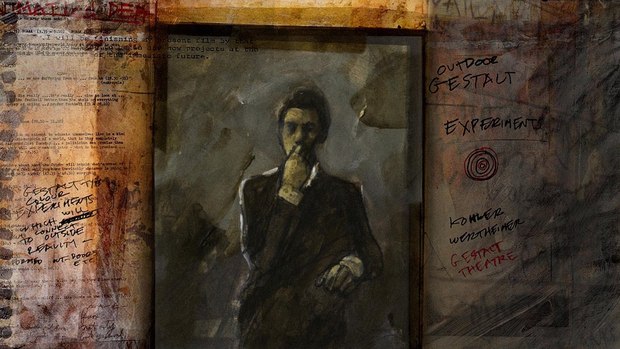 Hey…I know I know… little bit of self-interest to start this new column, but in all honesty, I was curious to know what Ushev was doing for three years after I handed him the script. I’m just a poorly formed words guy, he’s the song and dance man.

I printed some Lipsett shots, and some other shots, all edited in advance, on a cheap inkjet printer. You sit on a desk. Pour some paints into a plastic tray, use charcoals and crayons to hide all the photos, then use gouache and acrylic (all water soluble). And, of course, a lot of painting software and tricks, that I cannot describe here, because, even me, I don't remember how I got there. As usual, when I work with a computer, I try to achieve a level, as in the paintings, when I enter into trans, using mistakes and randomizing the software, to a point, that I can do things, that even their creators didn't think about.

It is corresponding to Lipsett’s state of mind, personality and mental condition. It had to be an expressionistic vision of his films to escape from the documentary feeling. Every frame had to be a piece of art.

What was the most challenging part of the process? To survive that film. It is extremely difficult to live inside the head of an artist who committed suicide for so long. Getting out of it, was a huge challenge for me.

Yes, of course, I have all those paintings in boxes. And when I watch the film, it still stays as one of my highest achievement. It is one of my best films, and I'm proud of it. But I take your question in a more general way – is it worth it to spend so much time into an animated film, so it ends up on a festival, surrounded by all those crappie funky-monkey shorts, or exercises in stupidity? Than my answer is no. The film won 20 plus awards, some of them from very prestigious festivals, as Clermont-Ferrand, Ottawa (surprise!), Genie and Jutra awards (the Canadian and Quebec film awards, respectively). But all the rest were mostly special mentions, which as we know, is the situation, when someone in the jury loves the film, but all the others hate it. I remember, there where people from the animation community, who were so against it, that they declaring on the jury meetings - "I'm ready to discuss every film in the program, except Lipsett Diaries” …  ha-ha. But as I don't care much about the opinion of others, so long as the film continues to live (which cannot be said for other films, which were highly awarded at that time) than it's ok.

Lipsett Diaries, Theodore Ushev, provided by the National Film Board of Canada

Framestore Sets Sail on ‘1899’ with New Virtual Production Tools
Animated Characters: The Art of Babbitt – Part 1
Bruce Smith and Ralph Farquhar Talk ‘The Proud Family: Louder and Prouder’ Season 2
VFX is the ‘Thing’ for Tom Turnbull on Tim Burton’s ‘Wednesday’
We Need to Chat
Choc Chip Animation Riffs on Pop Culture in ‘The Art of Murder’
F is for Flake: The (Not So) Great Animation Robbery?
Re-VIEW: ‘Avatar: The Way of Water’ – A Miraculous Vision
END_OF_DOCUMENT_TOKEN_TO_BE_REPLACED