What are all those paint men digging? - 'Junkyard'

Every Monday or so, Chris Robinson asks an animator how they made a particular film. This week: Hisko Hulsing discusses Junkyard. 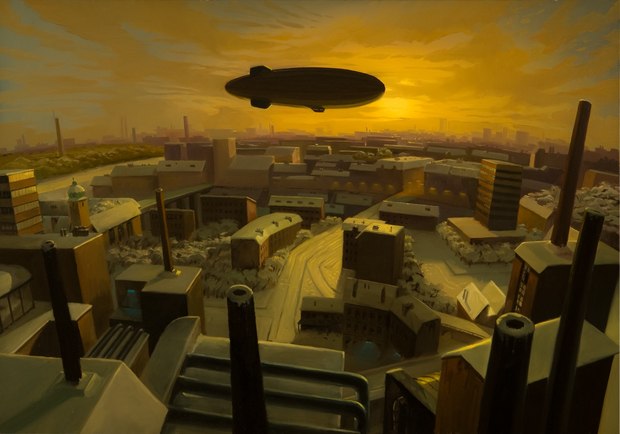 I painted all backgrounds with oil paint on canvas. The characters were all drawn digitally in TVPaint, using clay heads and live-action for reference. Some of it is rotoscoped, but heads and faces are not. I spend a lot of time animating the shadows of the characters with a pressure-sensitive watercolor-like brush in TVPaint, to enhance the merging of the characters into the painted backgrounds. There´s also some 3D animation in it. Polder animation texture mapped my paintings on 3D objects in order to be able to move them or see them from multiple angles.

I prefer the organic look of real oil paintings over digital ones and it is more fun to make them.

I know that many animators look down on rotoscoping, but using live-action as reference was really a choice that was based on the serious nature of the story that I wrote and on the fact that my drawing style had become so realistic that it was extremely hard to animate it frame by frame without reference. I never regretted it a bit.

Six years. It was extremely laborious and we didn´t have enough money to hire many people, so I did most of it myself. Polder Animation did the 3D animation,  2D animator Stefan Vermeulen and about nine interns that all worked on it for 3 to 6 months.

But I agree with you and the rest of the world. Six years is too long for an eighteen-minute film.

Making sure that the story would work. I made sure that I got feedback from people in different stadia and eventually the story did work well, so I believe.

I think so. Junkyard was pretty successful and I can still watch it.
I must have seen the film over a hundred times on festivals etc. and apart from some minor irritations, I am still proud on a lot of things. Not in the least on the fact that I composed and arranged the orchestral score myself.