What are all those paint men digging? - ' His Comedy'

Every Monday, Chris Robinson asks an animator how they made a particular film. This week: Paul Bush discusses the making of His Comedy (1994), which has recently been released online. 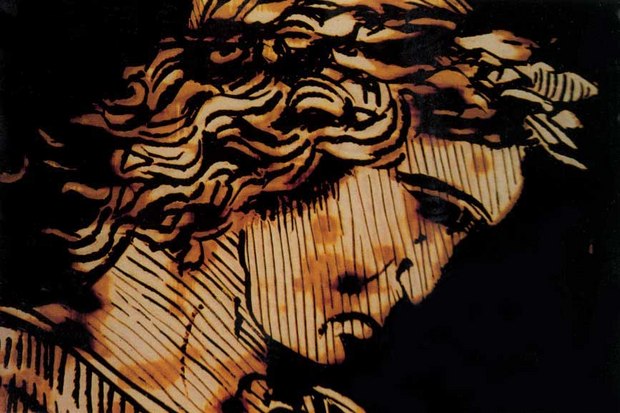 'His Comedy' by Paul Bush

It is scratched directly into 35mm filmstock. It is based on Gustav Doré’s engravings which were filmed on 16mm black and white and then enlarged onto different types of 35mm colour filmstock. The images were printed on the film very dark so when I engraved on top of them they were removed by the new line I was making. All the colour on the film comes from engraving into the three colour layers of the film. Different colours were obtained by using different combinations of film stocks and negative and positive images. It may sound complex but it’s almost the most simple and cheapest way of making a film.

At art school my work was informed by the minimalism and conceptualism of the previous generation, my teachers. This does not appear to be a minimalist film – in fact it’s visually quite baroque. But the underlying concept is to make engravings on film in the same way that craftsmen cut into the wooden blocks following the tracings of the original drawings. Instead of wooden blocks I was using film, instead of doing it once, I had to make the same image twenty four times a second and instead of the engravings being static, they move!

The film came about from a number of coincidences. One was being given a beautiful old copy of Dante’s Divine Comedy illustrated by Doré. The other was Peter Greenaway’s TV Dante which had just been made with state of the art computer effects, accompanied by his statement that film was now dead. This was something I wanted to prove was premature and came from the privileged arrogance of being able to use computer hardware that was completely unaffordable at the time to most independent film-makers.

Finally it came from my teaching practice in which I always gave students black and transparent film to experiment with. I loved the great depth on screen which comes automatically from changes in the thickness of the line, the colour and the direction of the movement. My problem with the technique was that no one had seemed to develop it much since the 1930’s, not to mention the cliché of free jazz that always seemed to accompany it. I was interested in narrative and the Doré engravings suggested a new way to take the technique. The first book of The Divine Comedy which describes a journey through the different circles of hell provided a simple structure to hold together a series of different experimental techniques – although as it turned out much more came across through visual narrative than I anticipated.

I spent a year trying out the technique before applying to Arts Council and Channel 4 ‘animate’ award for experimental animation. I had struggled through a very difficult time, about fourteen years of experimental film-making that had never provided me with any production money let alone an income. I said to myself that this was the last film I was going to make. I was going to start work as a tennis coach. In a year I made about a minute of film which I asked a friend to project in a cinema as I had no equipment to see it myself. It was extraordinary and I had no idea whether what I had seen was good or bad – I hadn’t seen anything like it before. I applied and got the commission at the first time of asking. After that it was all pleasure as there were no expectations on me - except to make another film that no one was interested in.

It was my first animated film and after such a long period of experimental film-making in which I had made little impression on audiences suddenly I had a film that was shown everywhere. This changed everything and soon after I began working full time on making my own independent films. It also introduced me to a long term collaborator on sound and music, Andy Cowton. Finally I became integrated into the world of animation, particularly as a teacher, and occasionally shock myself when I find myself enthusiastically discussing the dialogue of talking cats. Yes, it was worth it.

His Comedy from paul bush on Vimeo.