What are all those paint men digging? - 'Garden Party'

very Monday or so, Chris Robinson asks an animator how they made a particular film. This week: the French student hit, Garden Party (2016) 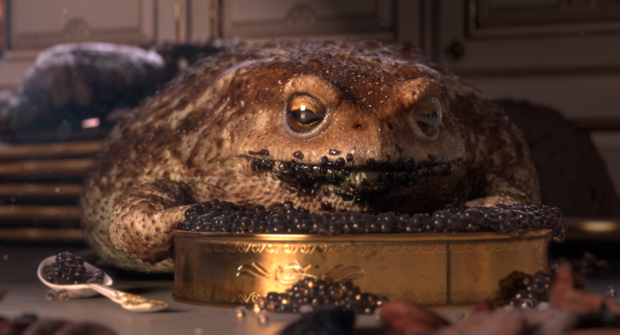 a fat frog from 'Garden Party'

We were 6 students in CG animation School (MOPA, France) and we had to make a graduation film for the last year of studies. We all liked animals, photorealistic images and black humour, so we worked on a story which can blend all of these interests together. We quickly had the idea of the crime scene, with frogs as the innocent witnesses. Then we worked a lot on the narrative aspect of the film, which had to show two parallel stories.

We had to create everything from scratch, from writing to the final images, and even the sound design.

It’s all made with Maya software, rendered with Arnold rendering, finalized in Nuke and edited in Adobe Premiere.

We had a very homogeneous team, where everyone could bring his skills to each step of the project. It was very comfortable even during urgent times, where a lot of people were needed for the same tasks (e.g. Storyboards, animation). It was a very challenging project, also quite exhausting, but that’s what we all like.

Animation was the perfect medium, using very realistic aesthetic, to play with the audience, and create this kind of confusing documentary atmosphere. We wanted the film to feel real and to give the public the feeling of a documentary turns slowly into a story.

We needed to do this in animation to be able to makes those frog and toad characters, and add a personality to them, to cross the limit of the real while taking care of keeping them believable.

Staying in the computer allowed to have full control of everything, from camera to our 3D actors.

We had to do this in 10 months, so that we could present the film to the jury at the end of the school year. To give a number, it was about 20 000 hours of work and 40 000 hours to calculate all the images, thanks to a high number of computers the school had. First the writing process, as the storyline was quite a mess to finalize. Blending the frogs moves with the polar narrative was really complicated, and needed a huge amount of storyboards and testing to find the right balance and rhythm. We were still changing half the structure of the scenes while the animation process was underway. But that’s where the fun is, isn’t it?

Also technically speaking, the huge amount of sets and objects we needed to create obliged us to find solutions and take time. So we created a 3D scanner using photography and computers to recreate assets in 3D. We built it in the garage of our common house, during extra school time. Quite tricky but we really enjoyed ourselves!

Definitely, and in many ways. The film caught the attention of many studios and gave us the opportunities to keep making film, with people who trust in us. That’s why we kept this team and created a collective of directors named ILLOGIC.

Garden Party from Illogic on Vimeo.

The Massive Creative Fellowship Behind ‘The Lord of the Rings: The Rings of Power’
‘The Dragon Prince’ Director Villads Spangsberg Talks Toonlines and Tough Challenges
Laurence Fishburne and Steve Loter Talk ‘Marvel’s Moon Girl and Devil Dinosaur’
Taking an Old-School VFX Approach in ‘All Quiet on the Western Front’
‘Natural Habitat Shorts’: Like ‘Ranger Rick,’ But for Adults
Framestore Sets Sail on ‘1899’ with New Virtual Production Tools
VFX is the ‘Thing’ for Tom Turnbull on Tim Burton’s ‘Wednesday’
We Need to Chat
END_OF_DOCUMENT_TOKEN_TO_BE_REPLACED