What are all those paint men digging? - 'This Ain't Disneyland

Every Monday or so, Chris Robinson asks an animator how they made a particular film. This week: Faiyaz Jafri's This Ain't Disneyland 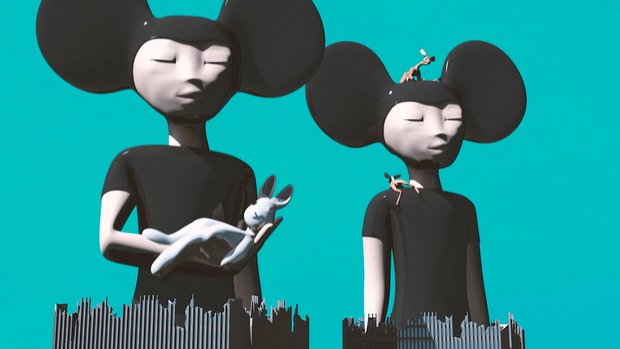 'This Ain't Disneyland' by Faiyaz Jafri

This Ain't Disneyland from Faiyaz Jafri on Vimeo.

The digital realm is my medium. Non-linear because I can, because I don't have to have storyboards, shot lists, and such beforehand and just compile stuff in various stages of finalness in the edit.

First, it was getting the towers to collapse the way I remembered it, imploding vertically like a controlled demolition, and after that, it was destroying the happy ending. My kids helped with the destruction by writing the intro and outro song of the film, which is an eerie bastardization of the Disney anthem.

I relate to Adorno's notion of Walt Disney being the most dangerous man in America, but I also have affection for the father of Mickey Mouse and his company. Disney is the wholesome entertainment I grew up with, but it also represents the mediocrity of pleasing everyone while not offending anyone. Disney embodied the idea of the America we all loved, from an era when as a society it practiced what it preached, an era where the American Dream was a reality.  It is the distorted version of that dream that eventually lead to the September 11 attacks.

I witnessed the collapse of the towers from the roof of my downtown apartment; it messed me up pretty hard. For somebody living in the West, growing up in the Netherlands, with all the privileges of my generation, this was the closest I had ever been to war. There are places in the world where these events take place daily, and the fact that I didn't deal with it well, got traumatized if you will, I found embarrassing.

Although I agree with Chuck Close, who said: "Inspiration is for amateurs, the rest of us get up and get to work," trauma is a great source of inspiration and exploiting it was cathartic.

Also not making films is depressing. Yes, it was worth it, and I would do it again.