For the co-creators, showrunners, and executive producers of the hit FOX animated comedy, humor can be found even in serious topics like global warming - the sisters consider themselves like the dance band on the Titanic, ‘keeping spirits high as the ship goes down.’ 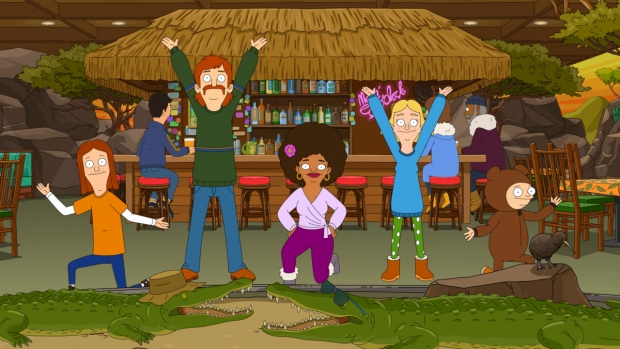 Last year, sister writing partners Wendy Molyneux and Lizzie Molyneux introduced audiences to a new womb-to-tomb family that stands proudly alongside Bob’s Burgers in the realm of “hard comedy” animation. The Great North, starring the six-member Tobin family, promises big animation spectacles and even bigger laughs, even on rather sensitive topics like climate change, as it begins its Season 3 run.

“We know we're all going to burn, so let’s put our fucking clown wigs on and see what happens,” says Wendy, who co-created The Great North with Lizzie after both served as producers on Bob’s Burgers. “We’re the dance band on the Titanic, just keeping spirits up as the ship goes down.”

The Great North follows the adventures of single dad, Beef Tobin (Nick Offerman), and his unconventional Alaskan family as they navigate life, love, and strange neighbors living in the town of Lone Moose. The series, which was nominated for a Critics’ Choice Award for Best Animated Series last year, began its new season run yesterday, September 25, on FOX, and on Hulu today. “It's been years, obviously, through development, and now, getting to air our Season 3 at this point feels like a whirlwind,” says Lizzie. “But we're super excited to still be able to write for the Tobin family.”

“We're still on Bob's, obviously,” adds Wendy of Bob’s Burgers, which also premiered its new season – number 13 – this past Sunday. “This is our home. The 20th Television family is a great place to live in day-to-day as a writer. These shows are funny, but there's also a warmth to them. So, you're not sitting around like, ‘What's the most nihilistic thing I could think of?’ We enjoy this sort of brand of comedy.”

But it wasn’t all warm and fuzzy family feelings getting The Great North to its third season. The Alaskan-centered, adult animated family comedy faced its fair share of challenges in the new season’s production, even as the world began reviving from the pandemic.

“We have a really busy cast, and our audio department and casting department were busy setting up recording sessions around the world,” explains Wendy. “Nick Offerman was doing Mission Impossible while also doing our show, which created our own impossible mission of getting that audio. Rob Delaney lives abroad, and Will Forte was doing a show abroad all summer. And then we recorded a lot of Alaskan actors who live in Alaska through a studio called Frostline. Our biggest challenge was getting all this audio from all these people who are very far-flung.”

But it was a price the Molyneux sisters were willing to pay in order to have great actors and authentic Alaskan voices on their show.

“This year, our casting department has done a great job of reaching out and finding more indigenous Alaskan Native actors to be on the show,” says Wendy. “This season, we go to Kima’s mom’s Athabascan village and meet some of the people who are there as well. So, it's folding that element into the show and having all these great new voices on the show this year that we're super excited about. There's a big indigenous population in Alaska, so it's a chance to have that representation.” But Wendy and Lizzie aren’t shy about their first and foremost priority in The Great North: to make it funny.

“We're focusing on some odd events in town that are based on real events that we've pulled from real Alaskan towns,” says Wendy. “It's what's kind of sets The Great North apart, being set in Alaska and getting to show some of the fun, day-to-day life in Alaska. Hopefully, it’s interesting and funny to people who aren't there and hopefully fun and realistic to people who are there.”

Lizzie adds, “As we moved into Season 3, we really got more of a sense of the town of Lone Moose, building out our characters beyond just their relationships to our main family. We're getting to know a little bit more about the town of Lone Moose itself and the towns that surround it and a bigger sense of this area of Alaska. We tried to expand while still focusing on the Tobins in the center of it all.”

One of the show’s writers, Carlee Malemute, had been living in Alaska and working remotely in a village of 500 people, providing Wendy and Lizzie with plenty of bizarre story material.

“There was somebody in her town who had three very different jobs,” remembers Wendy. “They were a plumber, the minister, and the person who fixed everybody's cars. And that seems to be a little bit of Alaskan resourcefulness that's fun to include in the show. It feels like we have a lot of characters like that, like junkyard Kyle who is a bit of a jack of all trades because of living in this small town. So that's been fun, to hear Carlee's stories of Alaska that can make it into the show.” But Wendy and Lizzie’s biggest source of story material – outside of their own family of seven – has been climate change.

“In learning a lot about Alaska, they are one of the areas that's really getting confronted with the realities of climate change,” says Lizzie. “It’s on their doorsteps. So, we were interested in figuring out a way to address that in a funny way.”

Wendy adds, “We always try to find something that could feel a little serious and find a funny way to tackle it. Global warming can be really fun if you look at it the right way.”

Of course, there is a right and a wrong way to humorize tender, tragic, or even traumatizing topics. But Wendy and Lizzie have a method.

“I think one of the key parts is having people on staff who have dealt with the particular thing that we're talking about,” says Wendy. “If something is part of your life, you have probably thought about it enough where you know you can't always be grim and you know what is funny about it. We had a deadly serious conversation with an actual climate scientist on Zoom. But even he found points of humor as he was talking, because he has to deal with this day in and day out.” But hope is also a key ingredient in Wendy and Lizzie’s writing, which not only highlights the humor in melancholy chaos, but uses humor to lift people up during days that seem especially dark. “Things suck,” says Wendy. “Things have sucked before, they will suck again, sucking is eternal. But we ask ourselves, ‘What can we do in spite of it to make life feel good at times?’”

For these sisters, laughter has truly been the best holistic medicine.

“We’ve done so much of this show through COVID, which has been a really difficult time for everybody,” says Lizzie. “But it’s the lightness of these shows that makes those hard times a little better. That sounds super preachy, but, at least for us, it's been a nice little joy for us to have this outlet in our life.”

Interestingly enough, TV served as an emotional life raft for Wendy who, during the first year working on The Great North, had a baby and battled postpartum anxiety.

“I found TV so helpful,” she shares. “One of the only times I would feel like I could get my mind off my thoughts was watching television. It really helped get me out of my head. All the women out there with PPA and PPD, hit us up. We got some show recommendations, in addition to seeking medical help, of course.” Along with laughing in the face of the climate crisis, there are also more large animation spectacles in The Great North’s third season, with tributes to, as Wendy says, “certain hobbity people who live in a shire,” as well as fantasy musical numbers.

“We get into ways in which the Tobins are very weird,” says Wendy. “Lizzie and I grew up in a big family and you have these weird things that your family does that no one else could possibly understand. This season, there’s a very fun episode where the Tobins are snowed into the house and are trapped together with a few special guests. And things go a bit off the rails. There is also a bit of a history surrounding a particular Christmas-toy-slash-monster that they are obsessed with. The further we go, the more we explore the quirks of that family.”

The two writer sisters also teased the finale, which they say was like sprinting the last leg of a marathon. But it was a hurdle that, in their opinion, really paid off.

“We're going to have a two-part finale this year and the amount of work that's already gone into it that our artists are doing on it, it's more like a movie,” notes Wendy. “It's a big action, two-part spectacle that, hopefully, will be enjoyable. But, yeah, it's big. And we were all bracing for it. We're like, ‘Okay, we all have to just like roll up our sleeves on this one.’”

The Great North has also been renewed for a fourth season. The release date has yet to be announced.