Animation supervisors Jeff Riley and Malcolm Lamont share how director Henry Selick encouraged them to break all the rules on his new film, eschewing CG for in-camera practical effects wherever possible and employing lots and lots of gooey museum gel. 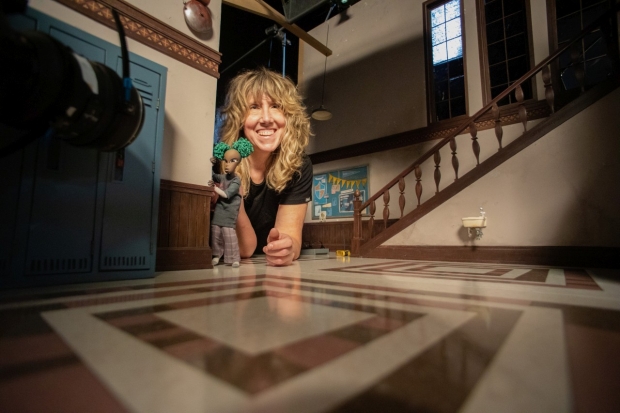 When it came to the animation and effects for Henry Selick’s latest spooky, scary stop-motion extravaganza, Wendell & Wild, there was only one rule.

“That there were no rules we couldn’t break,” says Jeff Riley, who worked as an animation supervisor on the feature film with Malcolm Lamont. “It was super liberating, after years and years of trying to perfect certain strategies and techniques, to know you can do it differently and, if it feels right for the movie, it's in.”

Wendell & Wild, which released in select cinemas last Friday, October 21 and is available on Netflix starting today, October 28, is produced by Monkey Paw Productions, Artists First and Gotham Group. The story by Selick and producer Jordan Peele begins with a young Kat (Lyric Ross) on her way home with her parents from a day at the family’s brewery. Caught in a storm and surprised by their daughter’s screams when Kat finds worms in her apple snack, Kat’s parents veer off the road and over a bridge. The car falls into a lake and only Kat can swim to safety.

Spending the next many years guilt-ridden and in-and-out of trouble, Kat gets the chance to restart her life by, ironically, going back to her hometown and enrolling at a private school that’s going under fast. Meanwhile, demon brothers Wendell (Keegan-Michael Key) and Wild (Jordan Peele) have their own family troubles, imprisoned in their father’s nose, forced to work as his hair cream applicator slaves. That is, until Kat discovers that she’s a hell maiden, summoning Wendell and Wild to the Land of the Living in the hopes they can raise her parents from the dead. “There is just something magical and strange and unworldly about knowing something's a real object and seeing it move like that,” explains Riley, who previously worked with Lamont on Coraline and Kubo and the Two Strings. “It’s just a bit, in a really cool way, uncanny and bizarre to see puppets moving and full of life. And it can look good across all forms of stop-motion where it can be made very crudely and be made very sophisticated and still look good. It is ageless.”

Lamont, who is also known for his animation work on Corpse Bride, believes the animator’s experience working with stop-motion also plays a role in the medium’s eerie essence.

“I do think there's something about stop-motion animators that is slightly different from a lot of other artists,” he says. “There's something about being, often by yourself, in a dark room, working for hours at a time, that just brings out the ugly, and your inner demons start coming out a bit.”

But those times of solitude also helped get the creative juices flowing for some of the story’s animated sequences – from vortexes and apparitions to booger sculptures, lightning storms and more – that proved tougher to hack.

“Henry was so interested in as many practical effects as possible,” says Lamont.

Riley continues, “So people would be off in a corner experimenting, just having some fun and seeing if they could figure something out.” One of the scenes that took considerable trial and error was where Sister Helley (Angela Bassett) – one of the nuns at Kat’s school who turns out to be a hell maiden like Kat – descends into the floor in a cloud of black, glittering smoke and lights.

“A couple of our animators, Amy Greenspan and Amy Adamy, did these incredible practical effects with black tulle and wool,” explains Lamont. “It looked amazing, and I think Amy Greenspan almost set the unit on fire. But it was really exciting and the stuff that stop-motion animators love doing.”

But some of Helley’s scenes became too big to animate with only practical effects; it took the team a whole day to film just five frames, meaning one second of the sequence would have taken a week.

“But then the great thing is we did these tests that we could then go to the CG team and be like, ‘This is how we want it to look and with these elements,’” notes Riley. “Which was a huge benefit to the film because, instead of us just asking for water or smoke, they can look at how we did things and incorporate it. It helps bring it all together.”

But there were still plenty of scenes created with practical effects. Such as when Demon King Buffalo Belzer (Ving Rhames) makes his appearance in the Land of the Living amid a frightening amount of lightning.

“It was one of the fun scenes that I got to be a part of,” remembers Riley. “We had this thing that we called a wand, which was a wire with the tiniest bulb we could buy, and we shut all the lights off on the set and then moved slowly across the set with the wand. We'd be shooting at the same time as we're animating, with two people coordinating where the lightning was going to start, and that tiny bulb would create a line and it would be lightning and it would actually light the set in this incredible way.”

But the biggest go-to material on the Wendell & Wild set was what the team called “museum gel,” and they used it for, as Riley says, “just about everything,” from puddles of icy water to squashed bugs and more.

“It starts out as this clear solid and then it just slowly seeps like water,” he explains. “It might take an hour or two to get out to a full puddle, but you can kind of manipulate it and mix things into it.” Lamont’s personal favorite museum gel scene is where demons Wendell and Wild are plotting their escape from the prison inside Belzer’s nose and making sculptures of themselves out of the demon king’s boogers to fool him when they take their leave.

“One of our lead animators, Michael Granberry, so often went back to using the museum gel that he was like the ‘King of the Goop,’” says Lamont. “And there's quite a lot of goop in that scene. Michael was like a mad scientist with the museum gel. I was always excited to see what he came up with each day.”

He adds, “Honestly, looking back, there's stuff in the film that I became so acclimatized to that I didn't realize how weird it was.”

One of the strangest practical effects that even had Riley, Lamont and the other animators questioning Selick’s sanity was when the director suggested giant mechanical heads to be used in the scene when floating heads of Wendell and Wild visit Kat in her nightmare.

“We built these giant silicon models – about the size of a human head – of Wendell and Wild,” explains Lamont. “And Juan Soto was the animator, but he had to almost puppeteer them. You would put your hand inside a glove, and there was this metal behind them, and Juan would be pulling them around. You could really stretch the jaw and the eyeballs. It was crazy.”

Riley adds, “In past movies I've worked on, if you suggested something like that, you would get kicked out of the meeting. When Henry expressed wanting to do this, it seemed way too crazy. But the results are one of the best sequences in the film. It's so weird, but so cool.” According to Lamont, Selick would often make requests on Wendell & Wild that seemed odd but, in the end, proved to be an asset to the story. And, usually, these requests were, as Riley puts it, “a reaction to the way stop-motion has generally gone over the last five or ten years,” with Selick wanting as little intervention from computers as possible.

This was not only the case with practical effects, but also with the character designs, birthed out of the concept art by illustrator Pablo Lobato.

“Pablo’s got a really interesting style that we were really keen to try and continue into the three-dimensional,” says Lamont who, along with Riley, was heavily involved in creating the facial kits for the puppets. “They’re so graphic and they're very flat looking. Often, when you get like some really cool character designs, you have some great artwork and then, when you start to try and make it as a 3D puppet, it rounds everything off a little bit. So, we had these really unique images and we really wanted to hold on to that sharpness.”

Because Lobato’s designs are quite geometric, it’s understandable to assume the subtle line across the middle of every character’s face is simply part of their concept art. But that line is actually a bit of an easter egg.

“In stop-motion, we change the faces with replacements, split down the middle, so we have more options,” shares Riley. “If you print the whole face, you're locked into what the brow, the mouth and everything else is doing. But if you split it down the middle, you have thousands of options, as opposed to like 10 or 20. And when we use a replacement, that's what it really looks like. With the line in the middle of the face.”

Lamont continues, “Any film that's been made over the last 10 years with 3D replacement faces has that line in there, but most productions paint it out. In Coraline, Henry was interested in leaving the line in because he felt like it highlighted the stop-motion technique. They took it out in the end, but I think this was his chance to try the experiment again.” Selick’s choice to leave the line adds to the toys-come-to-life feel of Wendell & Wild’s characters and looks very natural with Lobato’s designs.

“I think the faces are just incredible, so much so that every now and then I forget how weird they look to someone else who's never seen them before,” says Lamont. “Henry’s so passionate about stop-motion as a technique that he didn't want to hide anything about the style.”

The innovative nature of Wendell & Wild’s animation is, at the end of the day, about going back to the roots of visual effects and stop-motion and figuring out hands-on, organic approaches to bringing magic to a set and not hiding the imperfections that come with model making. And it’s why Wendell & Wild was a dream project for Lamont, Riley, and the whole animation team.

“When we were hiring animators, they saw the style, and they were like, ‘Oh, wow, that's really different. I want to do that,’” says Lamont. “The energy we brought to the film was exciting to a lot of people.”

Riley adds, “Henry writes these scenes that are just an animator's dream. This was a real chance to showcase stop-motion. We weren’t competing with CG. And I think that’s the real strength of the film.”