Warner Bros. Animation Ramps Up for the Streaming Age

With a new ‘Animaniacs’ reboot and a Harley Quinn series in the works, WBA series VP Audrey Diehl reveals what she looks for in new talent and what gives a pitch that special spark. 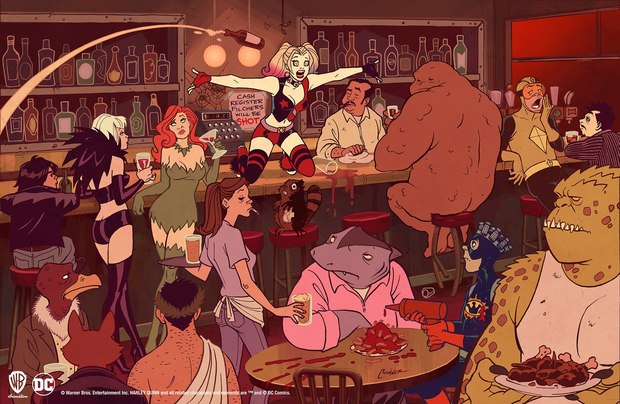 A new series based on the Harley Quinn character from DC Comics’ Batman is part of a new streaming service slated to launch later this year.

Audrey Diehl, a 14-year veteran of Nickelodeon, joined the creative team at Warner Bros. Animation last summer as vice president, series, reporting directly to WBA president Sam Register. In this role, she shepherds new projects into development and fields pitches for new ideas, while looking for properties in the Warner Bros. collection with the potential for a reboot.

“When I started, I was thrown right into the deep end, working on the new Animaniacs reboot -- helping them to staff up, find the right cast, and bracing some of our current clients, because obviously it’s a very satirical show, so we’re finding ways to talk about what’s happening now,” she says. Slated for release in 2020 on Hulu’s over-the-top (OTT) streaming service, the series is currently in pre-production on the first and second episodes. “We’re just getting going, establishing the style, finding the voice and figuring out how we’re going to honor the characters and make sure that it’s as beautiful and as fun and as groundbreaking a show as it was when it came out in the 90s.”

The reboot was announced in January as part of a two-season, straight-to-series order that also brought the entire original series to Hulu’s video-on-demand service. Steven Spielberg is returning as executive producer of the series.

Diehl is also currently developing a new animated series based on the Harley Quinn character from DC Comics’ Batman for a new direct-to-consumer DC Comics streaming service slated to launch later this year in partnership with Warner Bros. Digital Networks.

She explained that the show is targeted at adults, and they are planning “a completely different kind of show that I think isn’t out there right now, especially in the superhero space. It’s been really fun to push the character into a place where she can really be both a badass antihero, but also funny, and the heroine of her own story.”

A New Golden Age of Television

The bustling studio currently has 17 series in production with several new projects in the pipeline.

“It’s a really exciting time in animation,” says Diehl. “I think the content still has to be great, because the consumer is super-demanding and they have so many options. But I think the great thing about working at a place like Warner Bros. is that we can sell everywhere, and so we have the opportunity to make kids shows for Cartoon Network, and also make shows for Netflix and Hulu and for other digital platforms. It’s an opportunity to do all kinds of different types of shows for all different kinds of audiences.”

She added that the proliferation of new streaming services and outlets “allows people to spread their wings in animation and show that animation isn’t a genre, it’s a tool.”

As for the future, Diehl says, “We’re really looking at making all different kinds of projects, and we’re leaning extensively into our existing Warner Bros. library. And then, in addition, we are looking at original pitches, so I’m also building this small original slate that we’re working on as well.”

As we enter an era that some have called a new “Golden Age” of television, with new streaming services competing for content and talent cropping up on a weekly basis, Diehl says it’s an especially exciting time in animation. “Twenty years ago, most of the animation was going for the kids networks, and now I think it’s opening up so we can make animation for other audiences… but we want our content to break through, and show that animation can work for any genre and any audience. It’s not just kids. It’s not just families. It’s not just college students. Which means that we need to make sure we’re making things that are smart and interesting and engaging so that audiences will want to spend their time on them.” Overall, she reported that the studio is looking for talented people and new ideas. “Jobs tend to shift around in animation and right now there are a lot of jobs here at Warner Bros. and we’re interested in bringing in talent that wants to take a crack at the characters we have here.”

“We all fell in love with Looney Toons and a lot of the Hanna-Barbera characters. Probably everyone who works in animation connected with them,” she notes. “So, we’re hoping to bring in people who are really inspired to work with those characters and make something really special out of them in a way that’s really going to break through and blow everybody away.”

So what does she look for in a pitch?

“I think it’s important to have a really interesting and specific point of view from the person pitching, whether it’s a take on an existing Warner Bros. property or an original idea -- just something that feels inspired by the person who wants to make it,” she says. “That comes from their own unique perspective and has their own unique take on it. That’s the thing that always gets me the most excited.

“Usually when people are expressing themselves in that way, there’s an electricity to the pitch and a passion that’s coming through from them that I feel could possibly translate to the screen. I think I can just tell when people are excited to be making a show and it makes them excited too.”