Jared Stern's whimsical new animated series, launching November 8, addresses Dr. Seuss’ age-old questions… will you eat it in a box? Will you eat it with a fox? 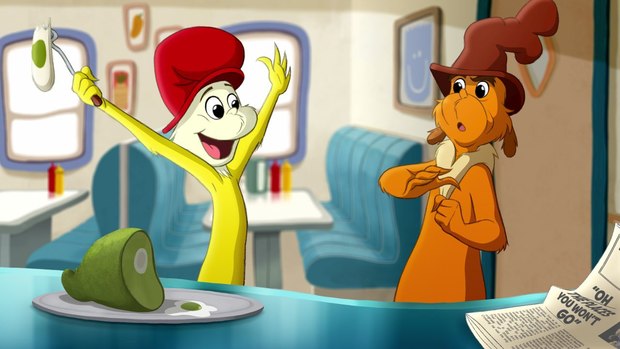 A brand new trip through the whimsical, iconic world of Dr. Seuss begins November 8, when Netflix's original animated series, Green Eggs and Ham, makes its streaming debut. Adapted from the classic Dr. Seuss children’s book, the 13-episode series, four years in the making, is a postmodern take on the classic buddy comedy; odd couple Sam and Guy embark on a road trip to return an endangered animal to its far-off home, and along the way, learn to try new things like hope, friendship, and a certain delectable dish.

In Green Eggs and Ham, extroverted and optimistic Sam I Am (voiced by Devine) rescues a rare Chickeraffe from the Glurfsburg Zoo, hides it in a briefcase, and attempts to make his way to Meepville in order to charter a cold air balloon to return the displaced animal to its island home. Meanwhile, introverted, plodding pessimist Guy Am I (Douglas) flops during his final big bid to become a world-famous inventor for the industrial Snerz Co. and resigns himself to a life of watching paint dry. A chance meeting in a diner leads to a pair of mixed-up briefcases and, before we know it, these two unlikely heroes are flung together on an expedition of self-discovery and culinary delight.

The production team, led by Stern, began with a clear vision for expanding the world of Dr. Seuss for the screen while staying true to its origins as a children’s book with a limited vocabulary of only 50 words.

“The book is simple and perfect,” Stern explains. “It was my favorite as a child. When our producers approached me to develop the show, I was hesitant because it's already a great little thing. But because of my love for the property, I had to at least think about it. So, I reread the book. And as I did, I realized it's a classic odd couple story of a grumpy, closed-off person and a silly, wide-open person. And it's a road trip -- the grumpy guy won't eat the eggs in a car, on a train or in a boat. It's Planes Trains & Automobiles or Midnight Run -- two of my all-time favorites. So, the world started opening up for me with possibilities, enough for a 13-episode series, while still staying true to the essence of what makes the simple original so brilliant. Hopefully we pulled it off!” Stern’s team debated CG versus 2D hand-drawn animation and ultimately decided that hand-drawn was better at capturing the feel of Seuss' illustrations, “Our art director, Pascal Campion, is a beautiful painter,” Stern shares. “Normally, you'd ogle the pre-production paintings in a CG feature's "art of" book. Our goal was to get those paintings into the actual show.”

Finding the right look for the series was a process of trial and error, according to Stern. “The tricky thing with the design of the show was that we wanted it to feel like the characters you love from the Seuss book. We wanted to retain that feel, but also just add a little bit more detail and dimension to them. And that was tricky—we couldn’t make them too detailed or it would lose that special Seuss-ness quality. But eventually we got there.”

“Our goal was to maintain the feel of Seuss' books in a bit more grounded world with real stakes,” Stern continued. “Seuss is everywhere in the show, from the hatched lines on the characters to the use of negative space. Our artists took inspiration from the books as well as his personal paintings and sculpture. Our hope is that it feels wonderfully like Seuss while still being something new.”

Susan Brandt, head of Dr. Seuss Enterprises since 1998, met regularly with the writers, sitting in on storyboarding sessions with the Warner Bros. Animation team. She praises the classic look of the hand-drawn visuals created for the series as “absolutely beautiful,” noting that “it feels so right, and particularly for this book. It feels authentic,” she insists. “This book was published in 1960. So, to have a quality of animation that harkens back to that time, it’s paying homage to when the book was first released and yet is done with a contemporary feel as well. To me, it’s a perfect balance of contemporary technique and quality with that old-school 1960 Golden Era that is so appropriate for this book. I think it’s a perfect balance.” Green Eggs and Ham used complex lighting and camera movement to help tell the story. Much of this can be done easily in CGI but achieving it in 2D animation takes a different level of skill. For the show, an actual drawing was made for every pose and each drawing was used only once. Although most everything on the screen is completely hand-drawn, production did utilize CG enhancements when necessary.

As the show’s producer, Kalafatic appreciates the organic variation 2D animation allows with each hand that touches it. “Every animator and artist has a unique style,” she says. “Part of the charm that’s integral to 2D animation is that you can feel the variation without it being distracting. There is a texture and warmth that you can feel with our style of animation. You can really exaggerate the characters’ performances when needed, and the subtle moments can be executed so delicately. We love CG animation, and stop-motion, but 2D animation was the most appropriate and natural fit to bring Green Eggs and Ham to life.”

According to Stern, one of the biggest production challenges had to do with staffing and casting. “You’re only as good as the people you’re working with,” he notes. “And we had to start a production from scratch, convincing great artists and performers to take a chance on something that had never been done before, something that was neither TV nor feature for a new thing called Netflix -- a lot has changed in the five years since we began!”

Stern and his team were tasked with developing an efficient pipeline to carefully and effectively handle a tremendous volume of deceptively difficult, labor-intensive and highly stylized 2D animation – all told, they produced five and a half hours of hand-drawn animation, inspired by beloved shows like Chuck Jones’s 1966 TV special, How the Grinch Stole Christmas! Bringing Green Eggs and Ham to the small screen combined many of the laborious and painstakingly detailed techniques employed on feature animation productions with the efficiencies and rhythm of episodic animation. “One of the things that’s great about making an animated feature is that it’s an iterative process,” Stern describes. “You get to make it over and over and over again. But often, in television animation, you don’t have that luxury. You record it, you animate it, and off it goes. So, we’ve tried to do a hybrid between the two. We figure out what’s working, what’s not working, we rewrite, we re-storyboard, we re-record the voices so that hopefully we come up with something really special by the time it’s done.”

Stern referred to Netflix as the “perfect home” for Green Eggs and Ham – they were very open to the creative process and he’s satisfied the final work has been true to the source.

“Generally speaking, the final work is pretty darn close to my original pitch [to Netflix],” Stern expresses. “But there are so, so many fun details that are so much better than what was in my head. To me, the greatest thing about animation is watching the work get plussed every step of the way, by writers, board artists, editors, voice talent and animators. I'm really happy with what this team has created, something subversive yet sweet that I hope Dr. Seuss wouldn't have hated.”

Reflecting on his long but rewarding journey, Stern shares, “It took eleven years from my first meeting until this show streams. It died and was miraculously brought back to life. So, I hope this show, which is in many ways about second chances and never giving up on your dreams, can inspire somebody else out there in the animation world.”