The Oscar-winning duo behind ‘Bob’s Birthday’ returns to the NFB with a new short film exploring the animal side of human nature. ‘Animal Behaviour’ by Alison Snowden and David Fine (2018). All images courtesy of the NFB.

To get a better understanding of human nature, sometimes we have to take a walk on the wild side. In Animal Behaviour, the latest animated short film from Alison Snowden and David Fine, the Oscar-winning team behind Bob’s Birthday, five animals meet regularly to discuss their personal struggles in a group therapy session led by Dr. Clement, a canine psychotherapist.

The comical yet moving short presents a menagerie of animals with issues and anxieties not so different from our own. The group includes Lorraine, a leech who suffers from separation anxiety; Cheryl, a praying mantis who can’t seem to keep a man; Todd, a pig with an eating disorder; Jeffrey, a bird with guilt issues; and Linda, an obsessive-compulsive cat. But this week’s session proves to be a challenge for the group when they’re joined by a reluctant new member: Victor, an ape with anger-management issues. As Victor navigates his first session, learning about each group member’s issues and the techniques employed to manage them, he resists the therapy process, upsetting the group dynamic and ultimately giving in to his own animal nature.

Produced by Michael Fukushima at the National Film Board of Canada, Animal Behaviour had its world premiere at this year’s Annecy Festival, in June, and was selected to screen at TIFF, currently underway in Toronto. The NFB short also screened at Anima Mundi and Animafest Zagreb, and is headed next to Edinburgh, Vancouver, and Ottawa, where it will screen in competition in the Canadian Panorama category. 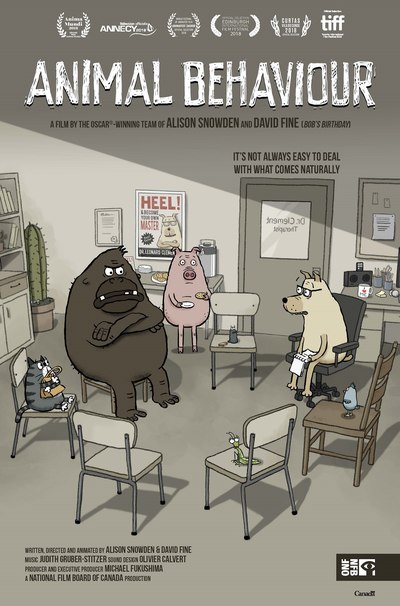 The 14-minute Animal Behaviour, created using TVPaint 2D animation software, was produced over a period of roughly two-and-a-half years. “It was exciting to learn how to use TVPaint,” Fine remarks at the Annecy Festival, where AWN had a chance to sit down with the duo to discuss the making of their new film. “One of the impetuses for doing the film -- besides the creative desire to tell the story -- was that we were really interested in working with 2018 technology, because the last time we did a film it was cel paint and cels. There was a learning curve that was difficult at first, but once we got into it, it was like, ‘Oh we love this. This is so easy,’” he says.

“It didn’t take too long because we learned as we were making the film, picking and choosing the features we needed as they arose,” Snowden adds. “I would never do it any other way now. We love that program for animation.”

TVPaint’s ability to produce painterly, hand-drawn lines in a bitmapped-based format that can be endlessly customized had great appeal to the filmmakers. “We wanted it to look as if we had made the film on paper in the traditional way, so we were trying really hard to capture that,” Snowden explains. “We really wanted it to look like a personal film. And TVPaint had all the tools to do that, even shading, because we wanted to put shading on the characters as well to bring out that handmade look.”

“And I love that look,” Fine enthuses. “The Breadwinner was made with TVPaint, and it’s beautiful. I have nothing against CGI films; I love lots of CGI films, but I also like 2D. I like height and width; don’t need depth as much.”

The muted color palette of Animal Behaviour allows the characters and liberally applied sight gags alike to shine. “I wanted a monotone, more adult look, because we wanted the situation to look more documentary, more serious or real. I also liked the idea of it basing it on the look of a graphic novel, because I love the way graphic novels use rich, monotone colors,” Snowden recounts.

“Another thing is is that it’s so busy in that room with seven characters and all the chairs and furniture -- if everything was all different colors, it would be even more chaotic looking,” she adds. “I really wanted the characters to pop. The simple way of doing that would be black-and-white drawings, but we wanted a richer look.”

“It’s funny, because in the end, when I look at it, I see a lot of variety of color,” Fine observes. “I don’t feel like it’s monotone. But when you look at Bob’s Birthday or something like that, it’s suddenly, ‘Wow,” because it’s got all bright colors and everything is also quite realistic. Whereas for Animal Behaviour we thought, ‘Let’s not be so realistic. Let’s do colors that just fit that palette.’” Collaborating with the NFB allowed Snowden and Fine to have creative control of the project while also providing critical feedback during crucial points of the process. “We would come in, at various stages, and Michael would organize a small group,” Snowden says. “That was very helpful, especially during the storyboard stage. It was great because people would be like, ‘I didn’t understand that bit,’ or ‘That didn’t work as well as that other sequence.’ It has to be clear,” she underscores. “You can intend something to be a certain way and miss that, whereas if you know people don’t understand it exactly, then it’s not funny, it won’t work.”

Fine adds: “One thing that’s unique for us is that we don’t work in the building Montreal; we work from home in Vancouver. So it’s a very long-distance relationship. But it’s still valuable, we still send stuff in,” he notes.

“It’s valuable because you have their support,” Snowden comments. “If it’s just David and I making a film, it’s a little bit isolated. We make the film, and then suddenly we’re trying to send it to festivals and show it, and, really, it’s just about the buzz,” she says. “Whereas this feels like we’re part of a community, which is nice, and they’re always communicating with us and being very supportive. So we feel like we’re part of this company or team, as opposed to it being just about the two of us.”

Beginning with their original concept, Snowden and Fine first laid out the major story beats, and then went back to develop the dialog and jokes, passing scripts between them along the way. “I don’t know that we have an approach,” Snowden insists. “You just hope to get a laugh whenever you can, try and to get as many as you can.”

“We write stuff, and if it tickles us, it stays,” Fine interjects. “We both take little stabs at it, going back and forth. If I’m writing something, I’ll want to show it to Alison to get her reaction, and vice versa.”

“But we have to leave time for the set-up, things like that,” Snowden notes. “You want to establish a situation in the office there, and let the audience believe in the characters a little bit. So not too many jokes off the top, because you’re trying to make this sort of real situation,” she continues. “One thing we do -- maybe we’re a bit mad, or something -- is give the characters a certain integrity. I don’t like doing things with characters that don’t ring true in some way, so we like to establish them as real people, and kind of follow them. And then we just let it build.”