For composers and partners Graeme Cornies, James Chapple, and Brian Pickett, scoring for shows like ‘Daniel Tiger’s Neighborhood’ and ‘Bakugan’ is more than mere child’s play. 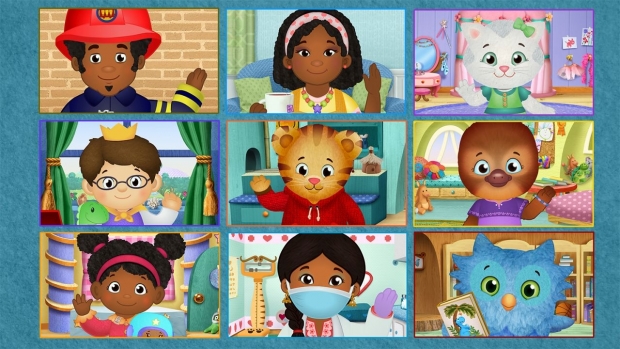 When assessing the key components of great animation, the first things that come to mind often vary, from art styling to storyboarding. Music usually isn’t on that initial list. But the effect on viewers of visuals, story arcs, and even voice acting can be dramatically enhanced by the right soundtrack. Music does so much more than fill dead space; it acts as an emotional catalyst, adding energy and impact to the happy, sad, powerful, and passive tones in animated stories.

“As a composer, you’re providing the subtext,” explains Graeme Cornies, a composer, producer, and partner at Voodoo Highway Music Group, the award-winning Toronto music studio behind thousands of hours of original music for film, television, video games, and advertising. “It's like being the bass player in a band. You're providing a lot, but you might not notice the bass players even doing anything unless he stops playing. I feel like if we're really doing our job well, you won't even notice that we're there, you'll just find yourself really caught up in the story.”

For over 20 years, Cornies, along with fellow Voodoo Highway composers James Chapple and Brian Pickett, have brought musical life to short thrillers like Thresher and Siren, and documentaries such as The Solomon Treasures and Where My Sorrow Died, as well as various video games and advertising. But Voodoo Highway’s focus has shifted since Chapple and Pickett first founded the company back in 2000; today, they’re mostly known for their music in children’s animation.

“Animation came along about seven years after we started the company,” remembers Pickett. “We just ended up winning all these auditions to do cartoons, and it turned out we were good at it.”

Chapple, who attended high school with Cornies and college with Pickett, adds, “It was a bit of an interesting path too, because we did a lot of reality television early on. And then the first show we got a call to pitch on was Total Drama Island, which is basically a reality television cartoon show. And so, it sort of made sense. Our background was perfect for that. It was neat how one thing led to the other.” “It’s like a big trail of breadcrumbs, because Spin Master, who owns Paw Patrol, helped us get connected with Bakugan,” notes Cornies. “I don't know that you can always choose your destination in this industry; we were really just trying to make broad range goals happen. When the company first started, there was a very different trajectory of getting into thriller and live-action. Finding our way into kids television was just following a trail of gigs, not exactly knowing where it would lead us.”

He adds, “But my daughter just turned two and I'm seeing the Daniel Tiger songs come to life in her mind, and she's singing strategy songs around the house that we’ve written. That really stands out and you realize how honored you are to be part of this beautiful thing.”

Cornies refers to Voodoo Highway’s beginning years in animation as, “our bootcamp years,” learning the ins and outs, and the highs and lows, of working in the fast-paced world of animated television. “Nobody really teaches you how to do this sort of thing,” he explains. “You're just kind of making it up as you go along. When we first started doing animation, it would take us a preposterous amount of time to do a small section because just learning how to set up and play off little audio jokes, each of them being three to fifteen seconds, and then making them sound like they're all one coherent score, was a big challenge.”

“You're switching styles and hitting every single comedic thing, which can be four or five different music sections to cue in a couple of seconds,” Pickett shares. “In long form, like reality shows even, there's a lot more broader strokes where whole sections should be tense and energetic. In cartoons, it’s like a million different things. So, the first couple of years in animation, we were working harder than I've ever worked in my life before we got our bearings. At one point, we were doing seven animated series all at once. I lost a few years of my life there.”

“And most of our hair,” Chapple laughs.

Most of the time Chapple, Pickett, and Cornies work on music during the voice recording phase, before final animation is put together, relying on storyboards, series bibles, concept art, and occasional stage directions to spark their musical inspiration. “We write the songs really early on, and typically the score happens about a year later,” says Pickett. “Once we get to the score, we, as a group of three writers, usually try to break episodes up thematically. We record the first two or three minutes in the series, and then we send it to our client and say, ‘Let us know. Are we on the right track?’” Once they get the green light, Pickett says they “dive right in,” producing music for an episode every week or two. “What we typically get to work with actually looks really strange to anybody who hasn't scored television,” Cornies explains. “It’s kind of uncomfortable to not hear any sound from the environment, to hear all the dead space when people are making their way from one space to another.”

“But that’s where we come in, to reinforce the story and fill in those spaces with music,” he continues. “The story is already going on, there is already vibes of how we should play the scene being delivered by each one of the voice actors. So, I feel like a lot is decided for us already. And if we're really doing what we should, you're going to be engrossed in what the actors are saying.”

In some cases, Voodoo Highway has even influenced the animation direction. “When we worked on The Cat in the Hat Knows A Lot About That, since we wrote songs before there was animation, we had a lot of leeway in dictating what the visuals were going to be for the series. Like, we could put in a little can-can music part and then the animators actually picked up on what we were laying down and would add a can-can scene. When that happens, it’s just pure magic.”

With education and cognitive learning also playing a part in many children’s animated series and influencing music choices, Voodoo Highway also sometimes gets the chance to utilize feedback from kids’ focus groups.

According to Cornies, “The Daniel Tiger team does a lot of research based on the music that we've submitted, like script readings with certain children’s classrooms, and they've played our early submissions and note how the kids reacted to, say, car noises in the chorus. If the kids love the car noises, maybe we pepper around a few other places where we have a horn beep or something like that, something that we knew for a fact excited the kids.”

Chapple says this has helped Voodoo Highway create songs that encourage young viewers to dream big and think big, rather than using music to “dumb-down” complex concepts. “I have a six-year-old at home and know that kids are smart,” says Chapple, who, along with Pickett and Cornies, write roughly four songs per Daniel Tiger episode. “They know when you're talking down to them. So, we try to take a little bit of that philosophy and put it into our music as well. All the songs we've done for Daniel Tiger over the years feels so personally rewarding because of that.”

Pickett adds, “I really enjoy the Paw Patrol angles we've been given these days as well. The producers, to me, are really pushing the envelope for a preschool show. We're doing some very heavy and big music that you might think would normally scare preschoolers, but it seems to be doing really well with driving these concepts home.” While working on shows like Daniel Tiger and Paw Patrol, according to Cornies, have been “a never-ending education,” the Voodoo Highway team also believes relying on instinct is just as important as research and taking direction from filmmakers. “When we first got the pitch for Bakugan, they told us to keep the music light,” Pickett remembers. “But the score we wrote in our pitch was not light. There are big explosions, there’s a fight between two big monsters… we couldn’t write light music for that. So, we took a more epic approach, like we have for feature films. We didn’t ignore the direction; we just knew we had to go heavy, and so we did, and they ended up coming back to us.”

“The characters in Bakugan take their stakes of what’s happening in the world very seriously,” Cornies notes. “In a lot of our other shows, they have totally different goals, where everything is kept lighter and where we're interspersing a joke every ten seconds. With Bakugan, we have fate-of-the-world stakes going on and it's super fun. But these songs can’t just be catchy and fun and entertain kids for half an hour. They also have to convey these concrete objectives and messages.”

Pickett says that the “going with our gut mindset” was a principle he, Cornies, and Chapple adopted after the Bakugan pitch and it’s one that’s served them well. From playing with pop culture references on Total Drama, teaching educational lessons in Daniel Tiger, drawing on dinosaur specials in Paw Patrol, or introducing Dragonoids in Bakugan, Voodoo Highway is still working on the same animation shows they started on over a decade ago.

“We consider ourselves so lucky to still be working on shows that have even lasted this long,” says Cornies. “So much of the time, even if the show is a hit, they won't make more than 100 episodes because sometimes the demographic of the show outgrows the series before they've seen that 100 episodes.”